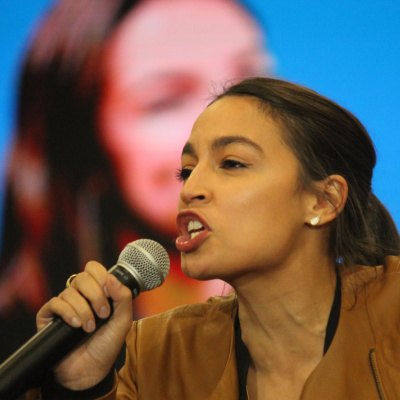 Our favorite Socialist Chatty Cathy doll, Miss AOC, opened her gaping maw to blame the problems in Cuba on the United States of America. The bartender/Congresscritter has proved that she slept through her classes at Boston University in both economics and international relations by claiming that it’s our “absurdly cruel” embargo on the importation of certain goods to Cuba and not the brutal dictatorship.

AOC, the rest of The Squad and Bernie Sanders were strangely quiet when the protests broke out in Cuba. And, as Nina wrote, our fascist social media was compliant with the dictatorship. Libertad, bah.

Alexandria Ocasio-Cortez is one of those educated, but ignorant types. You cannot tell her anything, because she knows everything already and she won’t listen anyway. We shouldn’t be surprised about anything that comes out of her pie hole, but the stunning stupidity is frightening, The people of Cuba have literacy, but what can they read? The people of Cuba have government healthcare, but it is substandard. They cannot legally better their own situations. According to AOC, it is the fault of the U.S.embargo:

“The embargo is absurdly cruel and, like too many other U.S. policies targeting Latin Americans, the cruelty is the point,” Ocasio-Cortez wrote. “I outright reject the Biden administration’s defense of the embargo. It is never acceptable for us to use cruelty as a point of leverage against everyday people.”

The embargo does not prevent other countries from trading with Cuba and the U.S. has sent emergency supplies to the island:

In a statement to NBC News, the State Department said it expedites any request to export humanitarian or medical supplies to Cuba; the U.S. embargo allows the export of agricultural products and food, medicine and medical equipment, and humanitarian goods to the island.

In the first six months of 2021, for example, Cuba imported $123 million worth of chicken from the U.S., the State Department said.

Does any aid we send actually get to the people? Questionable at best. That’s how brutal dictatorships roll. As a matter of fact, a social media user, Howard_Em, posted this helpful list: 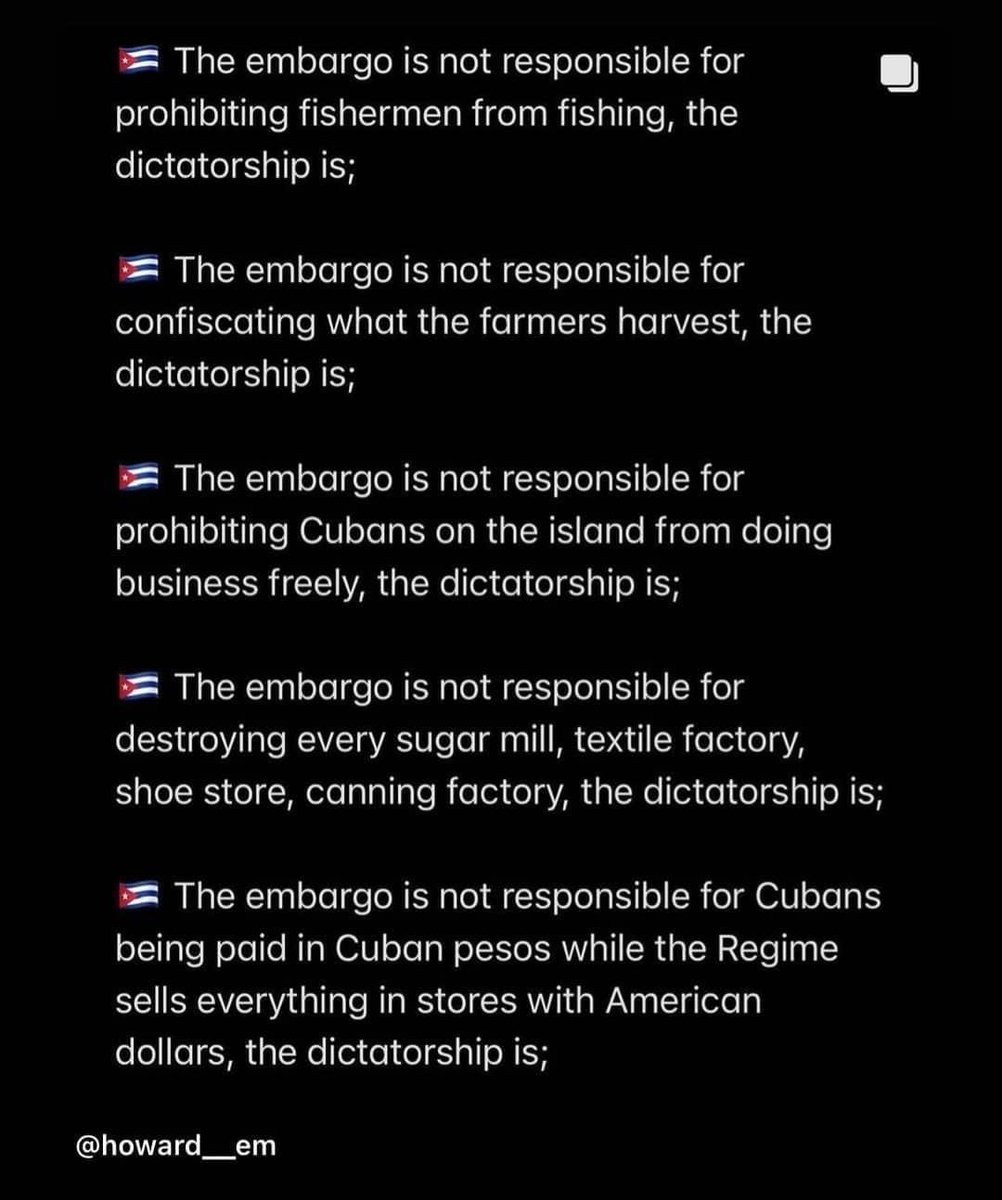 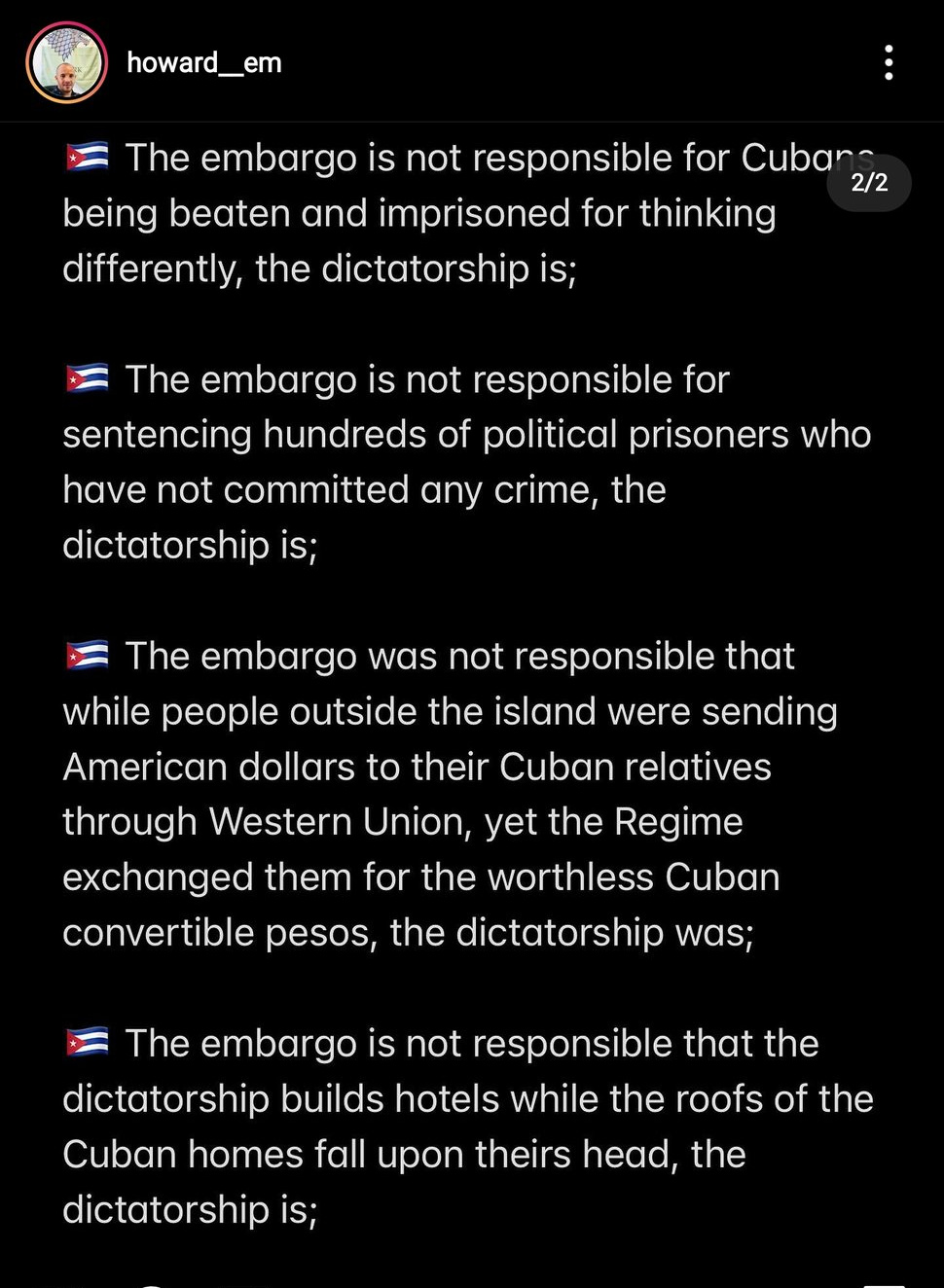 “We are seeing Cubans rise up and protest for their rights like never before,” Ocasio-Cortez (D-NY) began. “We stand in solidarity with them, and we condemn the anti-democratic actions led by [Cuban] President [Miguel] Diaz-Canel. The suppression of the media, speech and protest are all gross violations of civil rights.”

It’s so easy for the Latte Liberal to beat her gums and then drive off to Whole Foods where she illegally parks her Tesla:

The socialist congresswoman, 31, has previously railed against Tesla and Whole Foods owner Amazon as well as their billionaire owners Elon Musk and Jeff Bezos.

Alleged pictures of her car showed a white Tesla with a New York license plate and a congressional parking pass on the dashboard illegally parked on May 14.

The sophomore congresswoman, who earns a salary of $174,000, first told Vanity Fair in October that she had “just got a car.”

I am a huge fan of the rapper Pitbull. If you need to dance, I highly recommend Fireball. Pitbull doesn’t have a fancy education in economics or international relations, he barely got out of high school. He has started his own charter schools though. From NPR in 2013:

The Sports Leadership And Management Academy (SLAM), Pitbull’s new public charter school for students in grades six through 12, opened this fall in Miami’s Little Havana neighborhood. Pitbull says SLAM’s sports theme has a vocational bent as a way to hook kids for whom school is boring.

“If sports is what you love, one way or another, it’s a business you can get involved with … whether you’re a therapist, an attorney, a broadcaster,” he says. “They’re already labeling me ‘Mr. Education.’ “

He has schools now in Miami, Palm Beach and Las Vegas. Mr. Worldwide may be Mr. Education. Pitbull sent out a video, SOS Cuba. I encourage you to watch the whole two minutes of this heartfelt plea for freedom:

Can you imagine AOC showing, just once, her appreciation for the freedom she enjoys in the United States of America. This small-brained, walking gob is too stupid to appreciate the country that has made her a success. The country that has given her freedom and privilege. Blame the USA first is all this Socialist puppet has. AOC needs to educate herself. 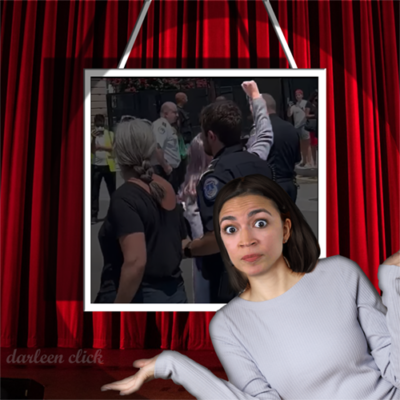