Next post
Carville: Liz Cheney will be next House Speaker 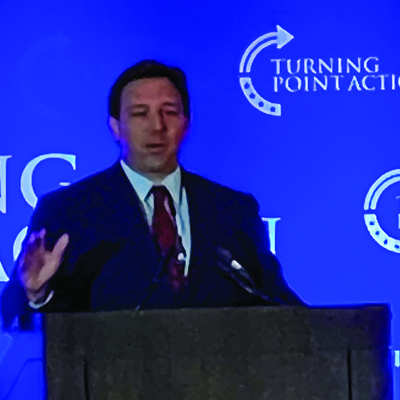 Just as fall follows summer, when natural disasters strike there are looters waiting to pounce. Florida’s governor Ron DeSantis knows this, so he issued a warning to the lowlife scum who can’t wait to rummage through what’s left of people’s homes to enrich themselves.

At a press conference in Fort Myers on Friday, the governor pronounced Florida to be a “law and order state,” warning would-be robbers “Don’t even think about looting.”

Lee County Sheriff Carmine Marceno echoed DeSantis, saying that there would be “zero tolerance” for anyone who would try to take advantage of the devastation, promising “swift incarceration:”

“We are not going to tolerate, I mean, zero tolerance when we say anyone that thinks they’re going to thrive on the residents of this county or state when we just took a horrific hit — I can guarantee you that is not going to happen.”

But then DeSantis riled up the anti-gun crowd and race baiters when he said this:

“I can tell you in the state of Florida, you never know what may be lurking behind somebody’s home. And I would not want to chance that if I were you — given that we’re a Second Amendment state.”

For example, a Missouri member of “Moms Demand Action” said DeSantis’s comments about the 2nd Amendment were “code words.” She tied them to the phrase “Stand Back and Stand By” which is a QAnon conspiracy slogan or something.

Florida Governor Ron DeSantis:
"You never know what may be lurking behind somebody's home…we're a Second Amendment state."

Code for “Stand back and stand by.”

This is what incompetent governance looks like. @MomsDemand pic.twitter.com/gPaqBsDf0n

She should focus more on crime in her own state, like in St. Louis. As for incompetence, she might take a gander at St. Louis’s disaster of a district attorney, Kim Gardner.

There’s this woman who tweeted that Charlie Crist, the opportunistic party flip-flopper who is running to retake the governor’s seat, is so much nicer than that mean Ron DeSantis.

Charlie Crist highlighting people's kindnesses and helping out, and Ron DeSantis is at a press conference threatening anyone thinking about looting- "This is a second amendment state."
See the difference? https://t.co/wAIkXt0I8r

Those are stupid tweets. But the most vile entry goes to MSNBC’s perennial race baiter, Joy Reid.

Just as fall follows summer, and looters follow disasters, so MSNBC’s Joy Reid will find racism in every story, be it big or small. And she saw in Ron DeSantis’s words the perfect opportunity to label him a racist.

Reid compared the Florida governor to the late Miami Police Chief Walter E. Headley, who once said, “When the looting starts, the shooting starts.”

Did Ron DeSantis utter those words? Not at all, but race baiters like Reid think they hear these dog whistles everywhere.

“Interesting. Under FDR when the 1938 hurricane hit, the orders to the national guard in Providence was shoot to kill when it came to looters with boats breaking into all the stores in Downtown providence. FDR was a democrat if I remember correctly.”

Does the wretched Joy Reid even consider that there are black people in Florida who want to protect their property from looters? And that they’ll be more than willing to pull their guns on the scumbags who try to take what is theirs?

Since when is protecting your property racist?

Moreover, why are the governor’s comments racist in the first place? Does Joy Reid think that maybe most of the looters might be …. gasp! black? Hold on — isn’t that racist in itself? So does Reid assume that looters are all “people who look like her”? That’s like Nancy Pelosi assuming that the illegal migrants coming across the southern border are only good for picking crops.

Ugh — these people are the worst. They hear racism on the lips of every Republican who holds office, yet don’t hear the same in their own comments. These are the same people who assume that minorities are incapable of existing without their beneficence. In the case of Joy Reid, she relies on racial identity to bolster her professional caché. Where would she be if it weren’t for MSNBC allowing her to bloviate on the imaginary racism she sees everywhere?

DeSantis Will Blow Off These Comments

If there’s one thing we’ve learned about the fearless governor from Florida, it’s that he doesn’t suffer fools. He and the press have had a rocky relationship, and the governor likes it that way. DeSantis has called out the press for misnaming his Parental Rights in Education bill the “Don’t Say Gay Bill” — and he signed it anyway. He also pushed back against the media and Democrats who clutched their pearls when he reopened Florida after a brief Covid shutdown.

So do you think that Ron DeSantis cares when Joy Reid points her finger and calls him racist? Hardly. This is small potatoes for the honey badger governor of Florida, who supports the Second Amendment and the right of his citizens to protect their property after a disaster.