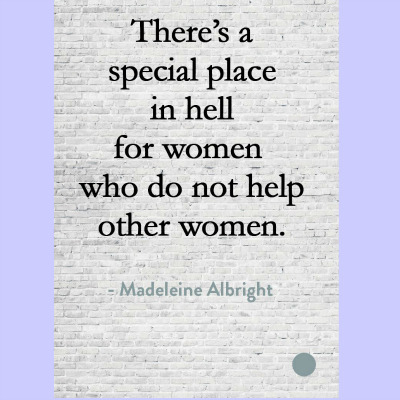 Previous post
Women Candidates and That Special Place in Hell

Dear Chris Hayes – Do You Even Econ, Bro? [VIDEO] 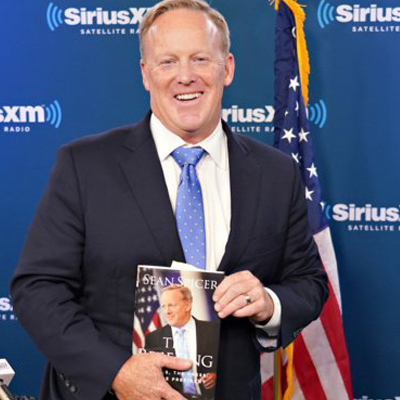 Dear Chris Hayes – Do You Even Econ, Bro? [VIDEO] 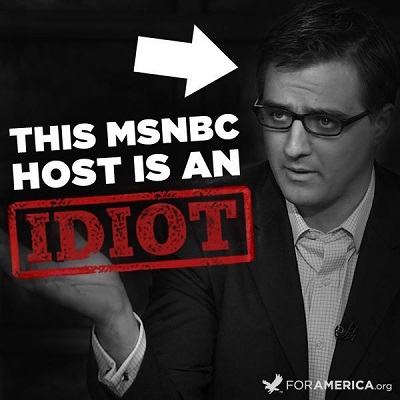 The left’s latest socialist Kewpie doll fad Alexandria Ocasio-Cortez was a guest on the Daily Show the other day, and even with a super friendly host, her appearance was as cringeworthy as you can imagine. With her usual Crazy Eyes ignorance on full display, Cortez once again tried to explain how she would pay for all the free shit she wants to dole out to the incapable, hardly capable, unwilling, and downright entitled and lazy.And when I say “tried to explain,” I mean failed miserably, but you already knew that!

“The Daily Show” host @Trevornoah asked Socialist congressional candidate Alexandria Ocasio-Cortez (@Ocasio2018) how she plans to pay for her agenda.

It really is hard to watch. pic.twitter.com/OGiPAArlce

But never fear, dear Alexandria, because your white knight is here to save you from… well… yourself. 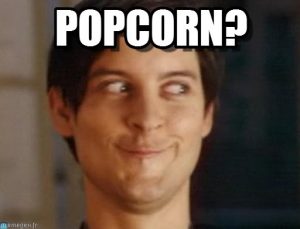 Enter MSNBC’s Chris Hayes, which automatically means y’all should run and get your popcorn, because this is going to be good.

Hayes, whose stellar economics credentials include a BA in philosophy from Brown – you know, that paragon of higher education where students two years ago were demanding extensions on their assignments, because SOCIAL JUSTICE ACTIVISM IS HAAAAAAAARD! – and a privileged wife whose daddy is veteran Chicago reporter Andy Shaw, decided to help Cortez out by letting her giving her a possible answer to the question about how she plans to pay for her “FREE SHIT FOR EVERYONE!” agenda. 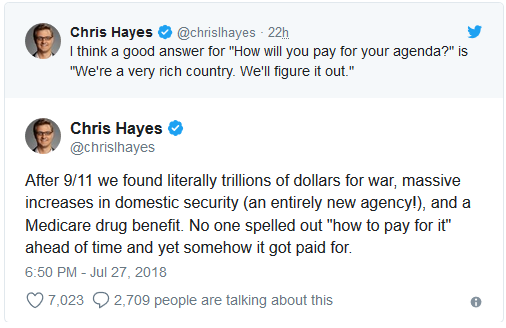 We’re a rich country. We’ll figure it out. Oooh boy! Where to start with this hot mess!

We apparently, found “literally trillions of dollars” post-9/11. You know how we “found” it, Chris? We ran up our national debt. That means we didn’t have the money. We didn’t find it. We borrowed it, you economically illiterate twit!

The national debt by the end of FY2001 – right after the attacks happened – was roughly $5.8 trillion. By the time the ISAF mission ended in Afghanistan in 2014, our national debt at the end of that fiscal year was $17.8 trillion. That’s money we had to borrow – not find somewhere in the couch cushions, which is what your fuckwitted viewers do when their Doritos and dubage fund gets depleted until the next paycheck from Starbucks comes in.

Now, 9/11 turned everything on its ear. It was a national emergency that no one expected, and no one planned for the massive borrowing we had to do to modernize our armed forces and rebuild our national security apparatus. I’m certainly not happy about the massive debt increase, but when your roof collapses, you need to repair it – even if you have to put the cost on a credit card.

Spending on Alexandria’s “FREE SHIT” agenda is certainly not a matter of national security. It’s more like that really nice Lamborghini you saw and decided to finance, because you didn’t have the money to purchase it out right, but you still wanted it really badly.

Do you know why people have to borrow money, you howling shit gibbon? Because they couldn’t just “find it.”

Others called Chris on this uncomfortable fact, but he apparently dug in, because he has zero comprehension of how the national economy works.

Cause, like, you know – writing a check totally means you have money, right? And, like, when your mom and dad give you money, it’s, like, totally yours, so, like, you have it, see? Cause mom and dad won’t ask you to pay them back – especially not with interest! 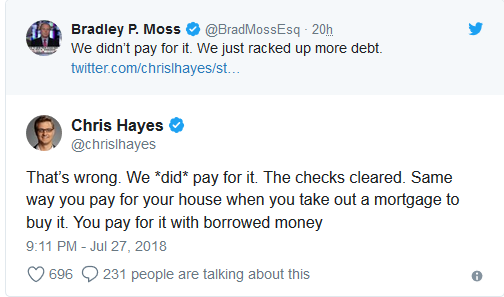 I’m facepalming so hard right now, I may be touching my brain, because it’s screaming in agony. I slept through my econ and finance classes at college – literally napped (when I wasn’t coming in drunk) – and even I understand how utterly, spazfuckingly assclownish that statement is.

So Hayes wants to borrow MOAR MONEY to pay for Alexandria’s dillfuckery.

The interest on the debt in FY2018 is the fourth largest item in the budget.

The interest on the debt consumes 7.4 percent of the FY 2018 U.S. federal budget. That makes it the fourth largest budget item. The only four expenses that are bigger are Social Security benefits ($987 billion), military spending ($874.4 billion), Medicare ($582 billion), and Medicaid ($400 billion).

How much more? Well, Bernie’s health care plan alone would have cost more than $57 Trillion over the next 10 years – even more than what the campaign and conservative economists predicted – and we can safely assume that Alexandria’s plan is similar, but that doesn’t even include her “free” college plans and the other free shit she plans to dole out at your expense.

So she claimed she could raise, like, $2 trillion by taxing the fuck out of the “rich,” who already pay the  majority of federal taxes, which apparently is not enough, because INCOME INEQUALITY! LOOPHOLES! Well, that doesn’t even come close to what is needed.

Then, even if we cut ALL discretionary spending – everything except entitlements, so no more defense spending at all, but also no spending for HUD, transportation, education, or any of the other goodies that the left loves to dole out because it makes them look like they give a shit about the general public – which let’s say averages about $1.1 Trillion per year, that’s only about $11 Trillion we’d have over the next 10 years to spend on health care alone.

And yes, I know I’m oversimplifying.

But hey, let’s borrow more. That way we’ll be spending even more of the federal budget on interest payments for the debt, until it consumes everything, leaving no more free shit to give out! We literally have borrowed more than our actual GDP. If we were applying to join the European Union, they probably wouldn’t allow us in, because the Maastricht Criteria for joining the EU caps the debt at 60 percent of GDP. 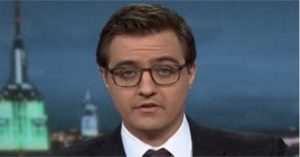 We already knew Ocasio-Cortez was a flaming dumpster fire, even with her dual degree in economics and international studies from Boston University, through which she apparently napped, because she knows exactly jack and shit about either one. But the douchey pajama boy, hopping in on his mentally challenged white steed to save her bony arse is even more entertaining!

Carry on, Chris. I need some levity today.