Next post
Democrats’ Circular Firing Squad: Who saw it coming? 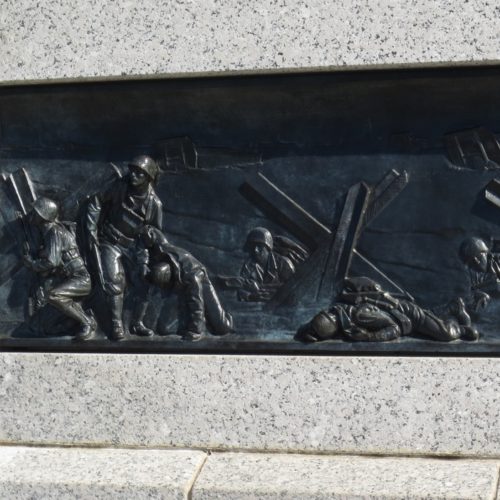 Yesterday was the 77th anniversary of D-Day. While this was not a “notable” number like a 50th, 75th, or 100th anniversary, every year that passes is certainly worthy of note – especially since those who were there are growing fewer and fewer in number.

Thanks to COVID, commemorations that were missing last year were much smaller this year.

For the second year in a row, anniversary commemorations are marked by virus travel restrictions that prevented veterans or families of fallen soldiers from the U.S., Britain, Canada and other Allied countries from making the trip to France. Only a few officials were allowed exceptions.”

At the newly-built British Normandy Memorial near the village of Ver-sur-Mer, bagpipes played memorial tunes and warplanes zipped overhead trailing red-white-and-blue smoke. Socially distanced participants stood in awe at the solemnity and serenity of the site, providing a spectacular and poignant view over Gold Beach and the English Channel.”

But you know who didn’t commemorate D-Day? That would be Joe Biden, the sitting president of the United States.

None of Biden’s Twitter accounts, @JoeBiden, @POTUS, or @WhiteHouse, made mention of one of America’s most notable military achievements. Biden did send out one tweet Sunday, but it made no mention of D-Day”.

And lest you think that no one in the White House remembered the date, somehow Jill Biden remembered what day it was from her official First Lady Twitter account.

77 years ago, families gathered around radios and heard FDR pray for a “peace that will let all of men live in freedom, reaping the just rewards of their honest toil.” Let us never forget those who fought, their families, or sacrifices, and let us always pray for peace. #DDay

But since she was out yesterday hanging out with Anthony Fauci in Harlem, no one else at the White House remembered to tell Joe what day it was. I mean, Kamala Harris was leaving for Guatemala and still remembered to hit send on a Tweet for D-Day!

On the 77th anniversary of #DDay, we honor the heroes who stormed the beaches of Normandy and liberated a continent. We will never forget their courage and sacrifice.

Seriously, does no one talk to Joe on Sundays? Does he get left alone in the White House to play by himself if Jill isn’t there to keep an eye on him? It’s not like Biden doesn’t actually know how to use Twitter, so did the entire West Wing presidential staff just forget? There’s some kind of whacked out dynamic between the First Lady’s staff, the Vice President’s staff, and the Presidential staff going on here.

So Jen Psaki got asked about it today during the daily briefing. (I would lay money that this is Peter Doocy’s voice you are hearing ask the question in this clip, even though you don’t see a shot of him or hear Psaki say his name.)

Reporter: Why didn't @JoeBiden commemorate D-Day on the anniversary?@PressSec: "It's close to his heart and I wouldn't be surprised if there's more we would have to say on it." pic.twitter.com/UcqFxkCW0A

Oh, boy, that was a swing and a miss for Jen Psaki. She clearly got caught scrambling for a good answer for why the unforced error happened. Does anyone really think that Biden is going to “circle back” (Psaki’s favorite turn of phrase) and have more to say about D-Day AFTER the date passes? Ha. Ha. Ha.

I have a hunch as to why Biden didn’t bother to remember D-Day. Yes, whoever runs his Twitter account didn’t remember, and the staffs of the First Lady and the Vice President didn’t bother to enlighten them about the date. Biden himself was not yet two years old when D-Day happened, so while it happened within his lifetime, it’s not within his working memory. Insert comment here about what is left within Biden’s working memory these days. Well, actually, I have a theory as to why Psaki can say that the military is “close to” Biden’s heart and he can still miss a day like D-Day without handlers reminding him.

D-Day has nothing to do with Saint Beau. Every time Biden talks about the military, it is nearly always in context of his late son, the venerated Beau Biden. We have talked about the fixation that the entire Biden family has regarding Beau, and Joe, more than anyone else, keeps bringing Beau up. And while no parent should have to bury their child, I am of the opinion that Beau’s death was a turning point in Joe’s mental acuity. Thus, without constant reminders by Jill, staff, or handlers, there was very little chance that Joe was going to remember D-Day on his own at this point.

So, Psaki can spin and swing, but Joe missed out. I bet there is a fair amount of finger-pointing going on behind the scenes in the West Wing of the White House today.