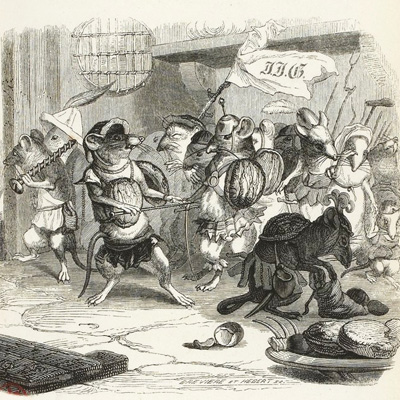 And urbanites from New York to Chicago to New Orleans be like: No sh*t, bruh!

The CDC recently advised Americans to be on the lookout for “unusual or aggressive rodent behavior.” Shutting down the economy has left the nasty critters hungry and on the hunt for food — so hungry, that they may even become cannibal rats.

“Community-wide closures have led to a decrease in food available to rodents, especially in dense commercial areas. Some jurisdictions have reported an increase in rodent activity as rodents search for new sources of food.”

That’s because urban rats survive largely on restaurant garbage, and since the pandemic lockdowns have curtailed much of that supply, rats are turning to warfare. In New York City, it’s like tiny rodent Sharks and Jets duking it out on the streets.

Bobby Corrigan, a rodentologist (how’d you like to be that guy?) who studies urban rats puts it this way:

“A new ‘army’ of rats comes in, and whichever army has the strongest rats is going to conquer that area. When you’re really, really hungry, you’re not going to act the same — you’re going to act very bad, usually.”

Meanwhile, Chicagoans say that the CDC warning of cannibal rats infesting their neighborhoods is “old hat.” The Chicago Tribune published an article in April about Chicago’s increasing rat problem, updating it after the CDC issued its warning. The updated Tribune article starts with this:

“A new warning from U.S. health officials is old news to many Chicago residents who have seen rats getting increasingly bolder in their hunt for food the last couple of months.”

The Windy City rodents — specifically Norway rats — are acting just like their cousins in the Big Apple. Groups are also fighting for turf, and even within their own colonies. The “alpha male” rats get to eat and mate first, while the “beta male” rats might go hungry. Betas also sleep outside the nest. And woe to the rat caught in a trap: cannibal rats eat the hapless critter’s remains, sometimes just leaving a head behind. At least these cannibals aren’t zombies, since they apparently don’t eat the brains.

Even worse, some Chicago homeowners have discovered rat burrows in their yards, or even rat invasions in their garages. Not only are these rats discovering residential garbage, they’re also consuming dog poop, which contains loads of protein and other nutrients. Oh, and they can also chew through plastic trash cans and squeeze in quarter-sized holes. Urban rats are truly the stuff of nightmares.

In New Orleans, the rat problem may be even worse, especially because it has a subtropical climate and tourists. Watch this video of rats swarming deserted Bourbon Street, which barely scatter even when a lone drunk staggers by.

But consider this: that video emerged in March. The article from the Chicago Tribune was first published in April, and, as I wrote above, is now “old hat” for Chicagoans.

And the CDC is just now issuing warnings about aggressive cannibal rats?

Norway rats, the type usually seen in urban areas, even in normal times carry a host of diseases. These include leptospirosis, tick-borne diseases, Murine typhus, and . .  oh, yes. . . plague. That doesn’t include the type of nasty stuff that people usually associate with flu, like vomiting, diarrhea, and fever, since rats spread bacteria which can bring those symptoms.

Now we’ve long know that rats carry disease. The CDC itself has had a page which tells how to deal with rat infestations. So why did is it just now warning people about aggressive cannibal rats emerging during COVID?

Because the CDC is like every other governmental organization dealing with this pandemic. It never thought about the consequences of shutting down the nation. It never thought about rats, or suicides, or alcohol and drug abuse due to job losses. Not did the CDC bother to consider missed health care by people whom they’ve frightened into near agoraphobia. In short, the CDC didn’t think to assess what a lockdown would do to people who don’t live in their academic towers. People who don’t know where their next paycheck will come from, especially people on the lower end of the income scale. All the CDC and the government cared about was flatten the curve, flatten the curve. Mitigation, mitigation.

Yet now they’re warning us about aggressive cannibal rats. Thanks for nothing, CDC.