The Wuhan Bat Lab Virus has allowed for naked exposure of what animates individuals in our Ruling Class and their apparatchiks. New day, new facepalm.

Not enough foreheads in California to cover its daily irrationality

Bad enough that Federal funds went to states to update their unemployment computer systems but wasn’t used — in 2009! — then as the CARE funds came online, we found out that many states were woefully unable to handle the requests (hey, anyone still coding in Fortran?). California has decided to now rub salt into these wounds. Keep in mind that Newsom’s AB5 law banned independent contractors in California:

Two weeks ago, KCRA 3 spoke with unemployment applicants who said the call center was answered by people in other states. One even said the person on the phone didn’t know how California’s unemployment payments were made.

Now, records obtained by KCRA 3 show that EDD agreed to pay more than $11 million to Deloitte Consulting to hire those employees. The contract started in April and goes through June.

Deloitte is supposed to supply 500 call center employees, allowing them to be independent contractors or subcontractors.

Who’s growing tired of this lunacy?https://t.co/LXfabUIdBB

Meanwhile, while Lightfoot’s LEOs were surrounding dangerous Bible-bearers, 10 people were killed/42 injured by shooters in one of the deadliest Memorial Weekends since 2015.

Going to Walmart is ok, Church not so much

Lightfoot isn’t the only Democrat that doesn’t like the President upholding the First Amendment.

Minnesota Gov. Tim Walz told reporters this weekend it is not clear that worship constitutes something essential, challenging President Trump’s assertion it is.

“I think the case that the president is making and that may be up for debate in this country of deeming houses of worship essential, essential services and that’s one that we take into consideration,” the Democrat governor said during an hour-long briefing on opening up religious services during the coronavirus lockdown.

We’re now back into bitter-clinger territory where our Woke Betters have decided they are no longer satisfied with mocking religious beliefs but actively looking to suppress them as long as possible. And if you object? You hate life.

Christian fundamentalism is often fatalistic. As far as many evangelicals are concerned, life passes quickly, suffering is temporary and worrying solves nothing. That’s not a view that comports well with long stretches of earthly time spent waiting out business closures or stay-at-home orders. It should be no surprise that a person’s deepest beliefs about the world influence how they measure the risks they’re willing to take. 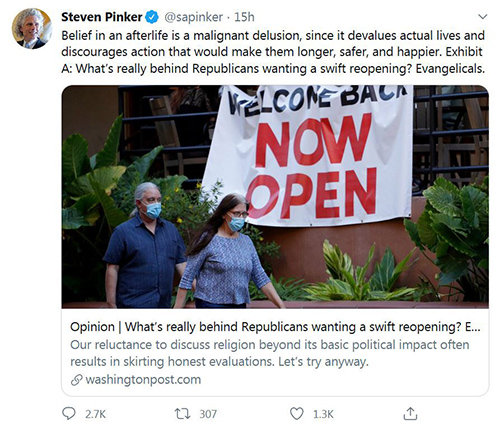 Whoa, that’s some ratio there! Anyone want to bet that Pinker and Abernathy have ever met, let alone sat down and had an extended conversation with, any observant Jew or Christian? It’s Gorillas-In-The-Mist all the way down with militant secularists.

Is your forehead ready? #BelieveAllWomen BUT …

“I do believe Reade,” said Omar. “Justice can be delayed, but should never be denied.”

Yep, we’ve moved from just trying to shutdown any attention to Tara Reade’s allegations to, “Hey, whatever.”

Believing survivors is consistent with my values. Yes, I endorsed against Biden and I didn’t pick him as our nominee. With that said, in this interview I did on May 6th, we talked about that and quotes aren’t always in context. I will vote for him and help him defeat Trump.

Deja vu this exercise in forehead-slapping.

I don’t know about you, but my forehead begging for some relief. Until next time (and you know there will be a next time. The Left can’t help itself.)