Apparently, Bristol Palin and Dakota Meyer have been on a whirlwind courtship.

Over the past few months, Meyer has been posting a lot of pictures with Sarah Palin to his Facebook page:

This picture of Bristol, Dakota, and Sarah has also been floating around social media for a while: 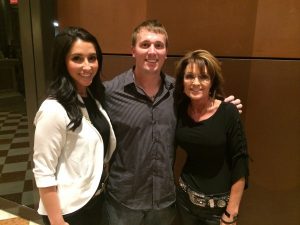 Both have been posting photos on their Instagram pages recently as well.

Had a great time at #CPAC with @bsmp2

Well, apparently, there is a reason for all the photo ops. It seems that they’ve been dating for the past few months, and now, they’ve announced their engagement!

The pair is believed to have gotten engaged last night in Las Vegas. With this engagement, Meyer joins one of the most powerful and influential families in conservative politics, and Palin will have the honor of marrying one of the military’s most admired and respected heroes.

To the happy couple, congratulations from Victory Girls!

UPDATE: Bristol has confirmed the news on her blog and gave some more details on their relationship and engagement.

Dakota came to Alaska to film Amazing America with my mom last year. He met Tripp during that time, and I’ve seen him in a few places where our paths have crossed since. He’s visited us in Alaska, and I’ve visited his wonderful family in Kentucky.

He’s wonderful with Tripp and I’m so proud to be marrying him.

He’s so romantic! He asked me to marry him at a Rascal Flatts concert. The lead singer, Gary LeVox, dedicated “Bless the Broken Road” to us, and then Dakota got down on one knee and proposed!

That may be the most romantic engagement story ever!

If anyone deserves love and happiness, it’s this guy.