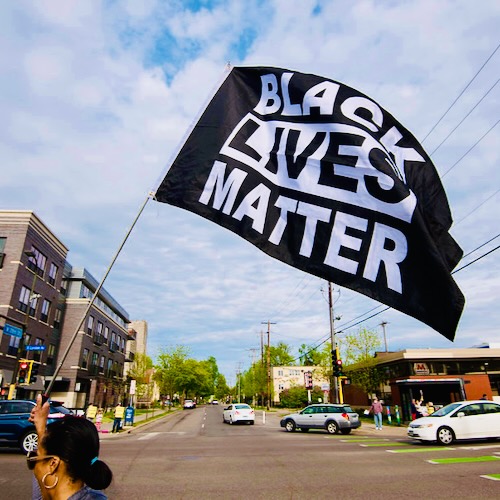 The new leader of BLM (Black Lives Matter) is now facing accusations of using the organization as his own personal slush fund. To the tune of $10 million dollars.

Keep in mind, this is the guy who was appointed to take Patrice Khan-Cullors place after it became known that she was using donations to purchase homes in the U.S., Canada, and elsewhere. She was forced to step down and stop her grift. Except she blamed all the ‘white guilt donations’ for her making the mistake of going on a home-buying spree. In other words, it’s everyone else’s fault but mine! One would’ve had to look very closely to realize that not one single Democrat on the federal level, including Biden and Harris said anything about that debacle.

Now, it seems the BLM Foundation is facing yet another scandal.

The leader of the Black Lives Matter Global Network Foundation has been accused by former colleagues of stealing more than $10 million in donations from the organization for personal use, according to a lawsuit filed in court this week.

Shalomyah Bowers was called in the court filing as a “rogue administrator, a middle man turned usurper” who siphoned contributions to the nonprofit activist group to use as a “personal piggy bank,” according to the lawsuit filed in Los Angeles County Superior Court on Thursday.

Bowers’ actions led the foundation into investigations by the Internal Revenue Service and various state attorneys general, “blazing a path of irreparable harm to BLM in less than eighteen months,” the suit claims. “While BLM leaders and movement workers were on the street risking their lives, Mr. Bowers remained in his cushy offices devising a scheme of fraud and misrepresentation to break the implied-in-fact contract between donors and BLM.”

Needless to say, those who brought the lawsuit are definitely not pleased with the BLM Foundation, and are demanding to know exactly how much money was in that slush fund.

We spent the last 6 months trying to handle things quietly…to negotiate and call Bowers in. He refused. We have no choice but to come to the people and ask for help in this struggle for the soul of #BlackLivesMatter. https://t.co/fAaEONRP2N

Today was a challenge for me. I am all for confronting white-supremacy, much harder to tell the truth about liars and thieves in our own midst. And still we must.

So, what does the Foundation do? Issue a statement that is nearly satire as it’s so full of politically correct wokeness.

More infighting and scandal within the Black Lives Matter movement. You'll never guess the cause: "It is nonstrategic, short-sighted, and a trauma response rooted in the scarcity that white supremacy and capitalism has cultivated in our communities."https://t.co/ExqnbmIvcX pic.twitter.com/VupFShNll9

Wait, WHAT? White supremacy and CAPITALISM have caused them such trauma that Shalomyah Bowers felt it necessary and right to use the foundation’s funds as his own personal piggy bank? Wow. That means anyone can use any political correct excuse to get away with criminal activities and not face consequences right?

Oh, wait. People associated with the Black Lives Matter movement have already gotten away with their actions with ZERO consequences. Remember the months worth of ‘fiery mostly peaceful riots’ in 2020? Is ANYONE in prison for that? Only one person that I know of, and that was the thug (who likely wasn’t even involved with BLM) who killed David Dorn in St. Louis that summer. Meanwhile, this tweet is still up.

Funny thing. One of those freed on bail, among the many who’ve never faced trial for their actions in Minneapolis, went on another crime spree. He murdered a guy earlier this spring. The bail fund has offered no apologies and continues to ask for donations. Great group that! I wonder how they feel about finding out the umbrella organization is accused once again of using funds for personal purposes?

As for the BLM Foundation and those accusing Bowers of making personal bank off the Foundation coffers? The in-fighting is incredibly popcorn worthy!

Our hearts are broken at this moment because white supremacy is the winner when movement leaders take the approach of publicly “calling out” comrades instead of “calling-in.” It is nonstrategic, short-sighted, and a trauma response rooted in the scarcity that white supremacy and capitalism has cultivated in our communities. It reflects a pattern that we see when money becomes the motivator. We are serious about deconstructing and decolonizing philanthropy because existing funding models continue to tear apart visionary organizations and foster a spirit of distrust, greed, and resentment. We as Black people and Black-led organizations cannot continue spending all of our precious time and energy fighting and tearing each other down. That is using the oppressor’s tools.

In other words, if you dare question how we run this Black Lives Matter organization, you are guilty of letting white supremacy win. You really really cannot make this shit up.

Keep in mind, this is an organization that, as of May 2022, is showing a net worth of $42 million in assets. Yet, as of that same month, the group still had no staff or executive director.

Yet the response to reasonable questions as to where the money is going is to blame the questioner for trafficking in white guilt or supremacy, or both. In other words, stay in our lane and don’t question us. It sure seems like nothing was going to change, and nothing has.