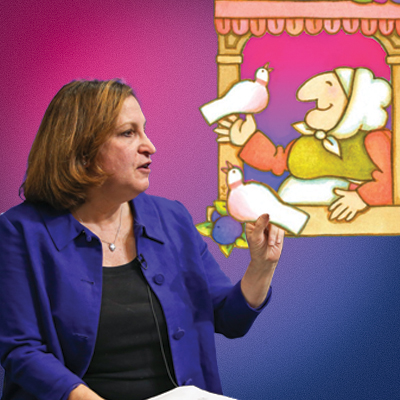 When I opened The Federalist website this morning and saw an article called Ruth Marcus Pretends to Be a Brave Victim When She’s Really a Self-Obsessed Drama Queen, I thought, who? That name rings a bell, but I couldn’t recall reading any of her work.

Marcus is the highfalutin’ deputy editorial page editor for the Washington Post — to which I don’t subscribe (although I do read the New York Times, so you don’t have to). And when Eddie Scarry, a peon writer for the conservative Federalist said she looked like Strega Nona, Ruth Marcus went into victim mode.

What’s wrong with Strega Nona? She’s the Italian “Grandma Witch” from the series of children’s books by the late author Tomie dePaola. As I recall from my years working in elementary schools, DePaola’s books were popular among students. And why not? They’re charming, wholesome, and often celebrate the author’s Irish-Italian Catholic upbringing.

Apparently not Ruth Marcus. The comparison triggered her, so she took her grievances to the WaPo.

This is a little more personal than usual—-but if you read it you’ll see why. https://t.co/IgdpUadgUM

Marcus starts her article by confessing that she has set Google alerts for her name (as one does when one is part of elite media). That’s when she saw it:

“So it was that I woke up the other day to see that a conservative writer had described me as “Strega Nona look-alike columnist Ruth Marcus.”

And then she went into victim mode:

“I’m going to speak up because, when it comes to appearance, women can never catch a break.”

She tried to contact Scarry by email to ask him why he thought the comparison was “appropriate.” But alas, it was to no avail.

“No surprise, I haven’t heard back.”

But oh, boy, does Eddie Scarry have words for Ruth Marcus.

Needless to say, Scarry isn’t the least bit apologetic. He does, however, strike right to the heart of this kerfuffle, “calling it the dumbest media controversy of 2022”:

“Naturally, the purpose was for Marcus to partake in every liberal’s favorite pastime — portraying herself as a victim so she can then be called “stunning and brave” by her sophomoric peers on social media.”

But never mind that Scarry’s original article focused on how the media holds a double standard when it comes to political violence from the Left. It was that throwaway Strega Nona line that made Marcus clutch her pearls. And here it is:

“The Post accused Graham of potentially instigating lawlessness, a point echoed by Strega Nona lookalike columnist Ruth Marcus, who on Tuesday called his remarks a “threat.”

Ruth Marcus Has Her Own ‘Splainin’ To Do

But let’s see what Ruth Marcus has done to other people, shall we?

She played the mask scold and bragged about it. Marcus also pointed out that the following infraction occurred in Wisconsin — you know, Flyover Country.

It's a rule, a county rule. "Face coverings are required among people ages two and older when in any enclosed space open to the public where other people, except for members of the person’s own household or living unit, are present."

She also wrote an editorial in which she declared that she would’ve aborted her unborn child if amniocentesis had revealed Down Syndrome:

“I can say without hesitation that, tragic as it would have felt and ghastly as a second-trimester abortion would have been, I would have terminated those pregnancies had the testing come back positive.”

Marcus also wrote a book which defended Christine Blasey-Ford’s sexual assault claims against Brett Kavanaugh — never mind that the accusations didn’t hold up. Yet she had no problem trashing Tara Reade for accusing then-senator Joe Biden of similar behavior.

Spare us your outrage, Ms. Marcus. As Scarry concluded:

“She’s not brave. She’s not a victim. Marcus is a narcissist, a nag, and a drama queen. And a Strega Nona lookalike.”

She may look like Strega Nona. But Ruth Marcus certainly lacks her charm.