Mimosa, Bloody Mary, nice flute of champagne — or maybe a favorite tipple in your coffee. Pour yourself one and, as Dorothy Parker once said, “If you don’t have anything nice to say, come sit by me.” It’s a fine Sunday morning to look back over the week.

Media and The State: blurry lines to get blurrier

… introduces bill to reward her friends in traditional media.

Sen. Amy Klobuchar (D–Minn.) likes to paint herself as a 21st century trustbuster. However, her latest antitrust proposal, the Journalism Competition and Preservation Act (JCPA), is pro-collusion and provides an antitrust exemption for politically well-connected news media companies. (snip)

The JCPA pits digital platforms like Facebook and Google against “traditional” media services such as newspapers. To “help” these traditional media companies against the supposedly big, bad tech companies, the JCPA mandates that platforms pay news publishers to link to their articles, creates an artificial limit discouraging news platforms from expanding their newsrooms’ reach to reap the law’s benefits, and creates an eight-year safe harbor from existing antitrust laws including allowing news companies to collude with one another.

Now, far be it for me to defend Fakebook and Gaggle as they’ve been as eager to hump Biden’s leg as a randy chihuahua who got into Hunter’s cocaine stash, but Klobuchar’s Pravada Media Welfare Act is little more than crushing the few local news sources and keeping us peasants tied to only the handful of major markets. As more and more people are rejecting “traditional” birdcage liner coverage, the more Pravda media is counting on the Deep State to keep them afloat.

Who do they think they are? Students who can’t pay their loans?

Attention, pregnant people everywhere! Being a breeder is hard work and all that pain and disappointment you surely feel is the fault of a conspiracy of myths fed to you by …

I’m old enough that these Joannies-come-lately to Betty Friedan’s universalizing of her own profound disappointment in marriage and motherhood to homemakers everywhere is as familiar as it is boring. The Feminine Mystique was published in 1963 and, frankly, even as women have moved into the workplace, opened businesses, dominated colleges and universities, the same arguments have been made over and over again. Now with more cowbell shrillness. Author Chelsea Conaboy’s blouse-rending column is a wall-of-text of question-begging, anecdotal fallacies and juvenile foot-stomping that speaks to an underlying emotion of pride-in-victimhood.

Ms. Niles was dumbfounded. She was not feeling fabulous in new motherhood. She was exhausted and anxious. She slept little and cried a lot. Even as she worked to bond with her daughter through co-sleeping and baby-wearing, she struggled to understand what the baby needed.

But Ms. Niles soon discovered that there was little room for that struggle within the prevailing narrative of motherhood, or even in her conversations with other parents.

All around her swirled near-rapturous descriptions of the joys of new motherhood. They all celebrated the same thing — the woman who is able to instantly intuit and satisfy her baby’s every need, and to do it all on her own.

Leave aside questions about the existence of “Ms. Niles”, just who are these rapturous “everything is FABULOUS” other mothers? When a group of young moms get together, maybe with something a bit stronger than an Espresso Macchiato, the hair comes down, the shoes are kicked off and moms swap stories of cracked nipples, episiotomy repairs and botched epidurals like Robert Shaw and Richard Dreyfuss comparing scars in Jaws.

I guess comradery under fire is out, media influencer with the biggest whine is in. Especially since Conaboy knows who is exactly to blame

Where did the idea that motherhood is hard-wired for women come from? Is there a man behind the curtain?

In a sense, there is a man behind the curtain. Many of them, actually.

And Christianity. And the Industrial Revolution. And conservatives – those dastardly deplorables who won’t let BigGov mandate paid maternity parental leave. You know, transfer the earnings of Other People to pay for her time off from work. She wants all this as a mother while saying that even the idea of mothers wanting to be home with their children is false. A mother’s love is this season’s false consciousness. Also, she is so dedicated to queering motherhood that she develops the weird tic throughout the piece of avoiding the words woman and mother as much as possible.

Strange, isn’t it that motherhood is such a life-sucking experience one wonders why there are so many willing repeat customers. It is also fortuitous that an actual biologist – one who is probably qualified to define “what is a woman?” decided to write a response. It is certainly a palate cleanser if you forced yourself to read Conaboy’s piece …

… and, lord help us, she’s writing a whole book on this hobby horse. Can you say “daddy issues”?

Back to evolutionary biologist Jerry Coyne …

How do we explain the fact that, across the animal kingdom, when members of only one sex do most of the childrearing, it’s almost invariably the females?

Show of hands now? Who wants popcorn while we wait to see if Conaboy will respond to Coyne? And bets on whether she’ll bring up his penis as proof of the Great Patriarchal Conspiracy?

You might be on overload since Sulky Joe’s Triumph of the Shrill rant, but darlings, we are going to be dining out on the memes for some time. 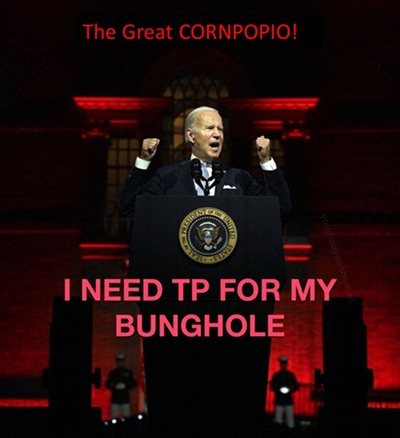 See you all next Sunday!