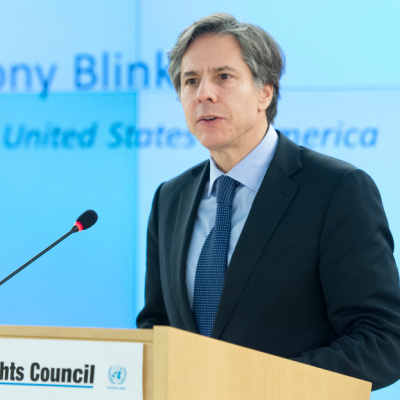 Victory Girls has not given up hope that the fraud in the 2020 Presidential Election will be adjudicated and Donald Trump will continue into his second term. However, Pretender to the Presidency Joe Biden has continued picking cabinet members. Since the Democrat Media Industrial Complex won’t vet these candidates, Victory Girls will. Our Nina did a deep dive on Jennifer Psaki and her truthfulness or lack thereof. Today, we are going to look at Antony Blinken, Biden’s pick for Secretary of State.

To say that Antony Blinken was born with a silver spoon in his mouth is the mother of all understatements. More like he was born with an entire silver chest in his mouth. His father was a founder of the investment firm Warburg Pincus. Antony attended The Dalton School, and an Ecole in France before matriculating to Harvard University. Blinken earned his J.D. from Columbia University. Entire silver chest, right?

Blinken has spent nearly his entire career in government. He came up through the system in the Clinton, Bush and Obama administrations. I will no longer call these people members of the Deep State or the Swamp. Those phrases don’t begin to cover the excrement that is perpetual Washington, D.C. These people are members of the Foul Septic System.

I would never hold it against anyone for having been born into a wealthy family. No. And, spending your career in government service is not necessarily a good or bad thing.

WEST EXECUTIVE AVENUE runs along the West Wing of the White House, the connection between presidential power and the offices where aides sit and do the real work. The name WestExec Advisors trades on its founders’ recent knowledge of the highest echelons of decision-making. It also suggests they’ll be walking down WestExec toward 1600 Pennsylvania Avenue some day soon.

Or, that they’ll be back in the Foul Septic System soon, greasing the way for their former clients.

Antony Blinken is, of course, critical of the Trump Administration and its foreign policy. Blinken believe that Trump has abdicated world leadership and abandoned our strategic partnerships. This video interview of Blinken with the United States Global Leadership Coalition is illuminating. Mr. Blinken is blithely unaware of the geopolitical situation:

First, this SecState pick claims that the world is in disarray. Well, Antony, the world despite the Wuhan Lung Rot is in pretty good shape. President Donald Trump has not involved us in any new wars, has not destabilized any governments (like say, Libya), and has negotiated new trade agreements and opened peace in the Middle East prospects.

Blinken’s comment that the world “doesn’t organize itself” is so elitist and condescending. Liberals think they know so much more about how other people and countries should live. Maybe that’s why Donald Trump was able to accomplish so much. He respected other countries as strategic partners with their own interests rather than trying to tell them what they should do. As you can tell by the video, Blinken doesn’t know the difference between leading and dictating.

A couple more things on the video, which I could not watch to the end (ZZZZ!):

1. Liberals NEED to be seen as popular in the world, specifically, Davos, Paris and Zurich. If the Pew Poll says U.S. popularity is down there, these people feel faint.

2. Blinken is hegemonic in his approach. The New York Times itself published an article that contained this paragraph about the expected Biden team, including Antony:

To some they are representative of what Mr. Obama’s former deputy national security adviser Ben Rhodes famously derided as “The Blob” — a Washington foreign policy establishment too confident in American hegemony and too willing to resort to force.

3. This guy has got to be related to John F. Kerry and Barack Obama. They all love the sound of their own voices.

And, finally, the worst thing that Antony Blinken has done is:

Blinken, who served as deputy secretary of state and deputy national security advisor under President Barack Obama, has also been a New York Times opinion writer and a “global affairs analyst” for CNN. In that capacity, he supported the “Russia collusion” hoax.

As Breitbart News reported in 2017, Blinken told CNN: “The president’s ongoing collusion with Russia’s plans is really striking, intentional or not.” He said that Russia had sown doubt about American elections and institutions.

Yes, this flaming twatwaffle aided and abetted the coup against our duly elected President. For that alone, he should, preferably, be in jail, or, at least, never hold a position of power in the United States government.