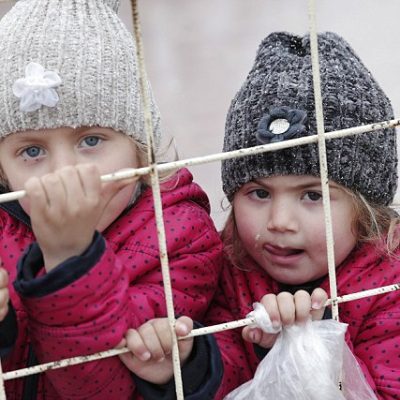 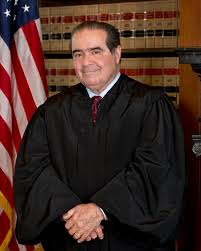 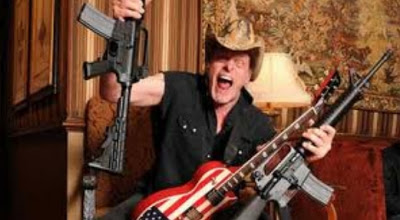 Let me start with this disclaimer: I’ve never been a fan of Ted Nugent. I never cared for the hard rock style of the “Motor City Madman” of the 1970’s, and I’ve often cringed at his rather offbeat defense of the 2nd Amendment. I prefer someone who takes a more cerebral approach to its defense — it’s just me. I’m sort of a nerd.

So when I read about his anti-Semitic Facebook posts from a few days ago, I was shocked and appalled. Why hasn’t the National Rifle Association, of which Nugent is a board member, removed him?

Let’s go back a few days. Nugent posted this gem at his Facebook page on November 8th.

Notice anything in common that all these people have on their pictures? Yes, they all have the Israeli flag affixed. Bloomberg’s photo is labeled “Jew York City Mayor Mikey Bloomberg.” Can you get anymore anti-Semitic than that?

While neo-Nazi and white supremacist groups are cheering on Nugent, some conservatives and 2nd Amendment advocates, such as Bob Owens at Bearing Arms, have decried this post, and have asked the NRA to remove him from its board.

Jewish gun owners were particularly incensed, and rightfully so. One such gun owner posted this fiery comment at Facebook: “I’m a pro gun Jew and you can go fuck yourself for your anti semite post. You knew what that picture was trying to comunicate. People like you don’t help the 2nd Amendment. You just anger the other side and give them ammo to push there agenda.”

Did Nugent take the hint? Nope, he just doubled down with this post, calling Jewish Holocaust victims “soulless sheep.” 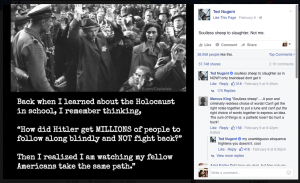 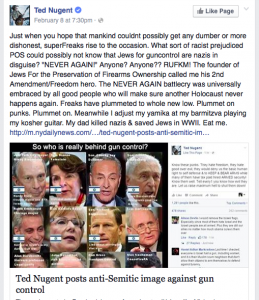 So Nugent justifies himself by saying, “My killed nazis and saved Jews in WWII. Eat me.” So what? So did my father. But my dad, still kicking at 91, would never make such dumb-ass anti-Jewish comments; in fact, he admires Israel, along with this daughter.

And Nugent has no intention of leaving the board of the NRA, according to a comment he left at Facebook when asked by a follower:

Neither does the NRA have any intention of removing him at this point. The allegedly no-nonsense pro-gun advocacy group meekly issued the comment that “individual board members do not speak for the NRA.”

Maybe not, but by association Nugent has just given gun owners and conservatives a black eye. Conservatism, and especially the vigorous defense of the 2nd Amendment, gets accused enough of being advocated by knuckle-dragging yahoos with little education and a whole lotta bigotry. Nugent fans can shout all they want about his First Amendment right of speech, but in the end they will lose the public relations war with the American voter, and especially in this election year that image counts.

It’s time the National Rifle Association realize that Ted Nugent is a bigoted bomb that has just exploded in their faces, and they need to clean up their damage by quickly dropping him from their Board of Directors, and by loudly announcing that decision.