Our favorite University of Missouri professor has pled it out. Melissa “I need some muscle over here” Click was charged this week with third degree assault – a misdemeanor. She agreed to do 20 hours of community service and not to get in trouble for a whole year in exchange for a suspended sentence.

Click was charged for touching and pushing a journalist’s camera who was trying to record a demonstration against racism held on the Mizzou campus back in November. If Click had elected to go to trial she could have received up to 15 days in jail and a $300 fine. Overall the plea agreement seems fine – if we view it in a vacuum. But the implications of what this professor did in her position as a role model to impressionable students remains quite disturbing.

The irony of the situation cannot be exaggerated. Click is a communications professor. One would think she would embrace the importance of portraying conflict in a fair and honest manner. Instead, her approach to communications appears to be how to skew the message to reflect favorably her personal opinion about a situation. Anything that detracts from the message she wants to send gets squashed – literally. From her actions, it can be assumed she is far better at teaching her students bias toward social justice causes rather than objective reporting.

This incident happened at a demonstration that presumably intended to raise awareness about institutional racism. Instead of helping to keep the demonstration on message and ensure it be received in the most positive way – as any communications professor might think was important, Click acted like a little dictator telling people who could stay and who had to go. Instead of persuading people that her issue was legitimate through a rational forum, her actions furthered the impression that these people are not interested in coming to mutually agreed upon solutions – they are all about puffing themselves up in echo chambers and promoting their message through bullying, and force if needed. If that’s how you have to convince people that you have a credible cause, it’s likely there is no substance underlying all the shouting.

Demonstrators against racism would do more to help themselves if they eschewed violence in favor of calm, measured discussion supported by facts – by presenting a starting point that everyone can agree upon. Click personifies the sentiment of most of these demonstrators in that they have no use for truth or coming to common ground by presenting facts (not emotionally charged anecdotes) and remaining nonviolent in their manifestation of protests. They are actually looking for and actively provoking violence – as a tactic to bring them the attention they seek. Luckily this time, the real culprit of the incident – Melissa Click – was caught on camera and properly charged. Her modus operandi has been laid bare and is clear for all to see. 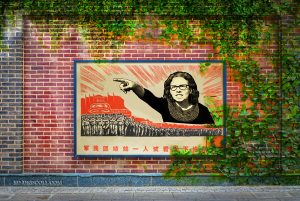 I can’t stand the kind of person that Melissa Click appears to be – a person in a position of power feeding her students falsehoods and conditioning them to be victims, all while seeming to be an upstanding person in the institution. She is manipulating her students in a self-serving way and to prove how brainwashed the students are, they have issued a statement declaring that Click is the true victim in this case:

Concerned Student 1950, the group that led the protests that prompted former UM System President Tim Wolfe to resign, issued a statement Thursday in support of Click, who is suspended as the university investigates her actions. The statement said Click is a victim of “social and political violence.”

“The University of Missouri System is devoting time to tarnishing Click’s career instead of dismantling the oppressive racist social system that it perpetuates!” the statement said.

No, my impressionable young minds, Click is the creepy older perpetrator of the only kind of thought crimes. She has groomed you in the most disgusting way possible. She has entered your malleable unassuming minds and deceitfully deposited her seeds of perpetual victimhood and imagined slights in your brain. The sooner you cleanse yourself of the influence of this scumbag parading around as an honorable member of academia the better. Don’t continue to let her, and those like her, to pollute your original thoughts and steal away your true potential. They are quite literally constructing imaginary roadblocks to your best future.

Listen, and learn from everyone – especially those with whom you think are too far removed from your own story. You owe it to yourself to know and understand all people, particularly if you care about them doing the same for you. I hope someone is teaching you that in your communications courses.