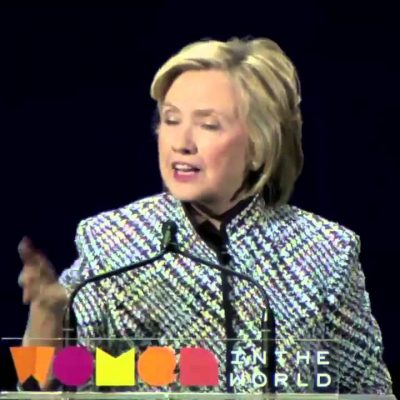 Yesterday the United States Senate voted 56-43 to confirm Loretta Lynch as the next Attorney General. The reaction, as Jodi noted, was decidedly mixed. Even the President decided to weigh in:

In written statement, Pres Obama needles Senate for "finally" confirming Loretta Lynch. But says "America will be better off for it."

Today, the Senate finally confirmed Loretta Lynch to be America’s next Attorney General – and America will be better off for it. Loretta has spent her life fighting for the fair and equal justice that is the foundation of our democracy. As head of the Justice Department, she will oversee a vast portfolio of cases, including counterterrorism and voting rights; public corruption and white-collar crime; judicial recommendations and policy reviews – all of which matter to the lives of every American, and shape the story of our country. She will bring to bear her experience as a tough, independent, and well-respected prosecutor on key, bipartisan priorities like criminal justice reform. And she will build on our progress in combatting newer threats like cybercrime. Loretta’s confirmation ensures that we are better positioned to keep our communities safe, keep our nation secure, and ensure that every American experiences justice under the law.

I like how he used the word “finally” as if we’d been waiting for YEARS to confirm Eric Holder’s clone to the Attorney General’s position. Perhaps we will be better off with Loretta as the new Attorney General. I’m sure we can count on her to actually prosecute crimes rather than sweeping them under the rug or giving them a pass … RIGHT? Oh I know!! She’ll actually follow the law and adhere to our Constitution rather than letting the President throw out Executive Orders willy nilly… RIGHT?  When Loretta walks into her office next Monday or Tuesday after she is sworn in, I have to wonder if one of her first priorities will involve a former Secretary of State who happens to be running for President.

Perhaps this will do the trick. As of yesterday, its become very apparent that Hillary Clinton and her Clinton Foundation have huge bags of cash up their pantsuits…er sleeves. Each bag of Clinton Cash involves Russia, Putin, and Uranium. That’s quite the RESET button combo right there dontcha think? Well, Jo Becker and Mike McIntyre of the New York Times tell us its even worse than we thought:

At the heart of the tale are several men, leaders of the Canadian mining industry, who have been major donors to the charitable endeavors of former President Bill Clinton and his family. Members of that group built, financed and eventually sold off to the Russians a company that would become known as Uranium One.

Beyond mines in Kazakhstan that are among the most lucrative in the world, the sale gave the Russians control of one-fifth of all uranium production capacity in the United States. Since uranium is considered a strategic asset, with implications for national security, the deal had to be approved by a committee composed of representatives from a number of United States government agencies. Among the agencies that eventually signed off was the State Department, then headed by Mr. Clinton’s wife, Hillary Rodham Clinton.
As the Russians gradually assumed control of Uranium One in three separate transactions from 2009 to 2013, Canadian records show, a flow of cash made its way to the Clinton Foundation. Uranium One’s chairman used his family foundation to make four donations totaling $2.35 million. Those contributions were not publicly disclosed by the Clintons, despite an agreement Mrs. Clinton had struck with the Obama White House to publicly identify all donors. Other people with ties to the company made donations as well.
And shortly after the Russians announced their intention to acquire a majority stake in Uranium One, Mr. Clinton received $500,000 for a Moscow speech from a Russian investment bank with links to the Kremlin that was promoting Uranium One stock.

It will be extremely difficult for Hillary to dispute these photos of her, Bill, and Chelsea with Frank Guistra – the key player in all this mess. 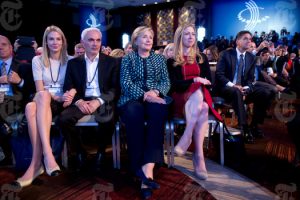 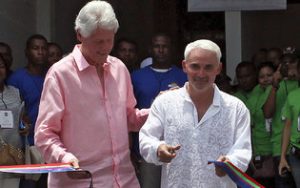 Guess what? Russia is cleaning up.  They don’t need a RESET button concerning uranium anymore.  Nope, they had Hillary, Bill and their pal Frank hitting it out of the park with their sweet deal.  It was SUCH a a sweet deal that even Chelsea benefitted.

Hillary sold control of 20% of US uranium production for $2.5 million.
Hillary bought Chelsea a NY apartment for $10.5 million.#truestory

Here’s the deal. If Bill and Hillary were so damn broke that they needed $2.35 million from Ian Telfer and 31.3 million from good ole Frank to help defray the 60% or $290 million of “other expenses” the Clinton Foundation was incurring, why didn’t they take on some more speaking engagements?  Hillary could’ve made $2.4 million by giving just 8 speeches at $300k within about 5 months. Instead, they played the shell game with the money they raked in, and their donors on the uranium deal threw money at them like it was candy.

All of this leaves us with one question concerning our new US Attorney General.  Here we have a presumptive Presidential candidate who has been part and parcel of money exchanging hands for numerous favors, handed over 20% or more of US uranium mines to the Russians, has violated State Department communication protocols, and done her best to destroy all communications that she engaged in while Secretary of State. Will Loretta Lynch have the fortitude to uphold the law and prosecute Hillary no matter what our golfer President says?  She should, she absolutely should. The question is, will she?