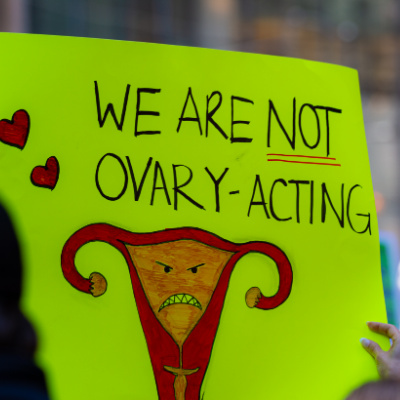 I will never get it no matter how hard I try. I do not understand White Liberal women and their sick and undying worship of abortion. They have total and complete arrogance that their life matters more than anyone they love or the baby growing within them. To say that author Leah Hampton worships at the altar of abortion would be a gross understatement. Abortion defines her life. Her disdain for women who don’t worship as she does is second only to her palpable hatred for women who hypocritically have abortions but don’t fight for abortion rights. White women like her suck.

Salon Magazine published the Hampton piece “The white, conservative Southern women who asked me to keep their abortions secret” with the sub-lede “My middle-class evangelical peers quietly took advantage of abortion rights, while publicly advocating against them”. Hampton begins with the tale of her friend a bride who had two abortions. One was in high school and one was more recent after an affair. The friend takes the moment before her trip to the altar to ask Hampton to keep her secrets. She tells Miss Hampton that this was a “one-off”. Well, no. Once is a one-off. Twice is a trend. I have zero sympathy with hypocrites. It’s one thing if you don’t believe in science and want to scoop the cells out. It’s entirely different if you acknowldge the baby’s personhood and murder it anyway. I don’t care for hypocritical murderers. They are not my problem. They have to appeal to a higher authority.

You don’t have to read Victory Girls very long to know our views on abortion. If you don’t here is a post from Lisa that is darn good.

From the Hampton article in Salon:

I was born in the Bible Belt, nine months after Roe v. Wade was decided. My life has been defined by this landmark 1973 ruling and the freedoms it afforded me: bodily autonomy, personhood, empowerment. I heard that message loud and clear, despite growing up in the conservative, religious South. Knowing I would never have to pump out unwanted babies was a lifeline, and the reason I never breathed a word of my friend’s abortion — or anyone else’s. My peers and I understood that when it came to our bodies, the Roe decision meant we could and must always support each other’s reproductive choices. And when anyone’s choice needed to be covered up (which was often), we did so unfailingly, certain we were abetting a righteous lie. Now, almost 50 years later, abortion rights are all but gone, and I find myself in shock like many Americans, but also in profound doubt, concerned that perhaps I got the message of Roe wrong.

Much more important than baby murdering for bodily autonomy would be, um, birth control, especially if you don’t care to “pump out unwanted babies”. This woman is a writer who either doesn’t read or can’t comprehend. Abortion rights are not all but gone. Abortion rights are a states issue which is how it is supposed to be. And, most of the rest of the civilized world doesn’t cotton with unrestricted abortion. Only places like China have the unrestricte abortion access that Chuck Schumer advocates.

Author Leah Hampton sounds like she grew up in the 40’s version of West Virginia. Visiting my family in the 70’s and 80’s version of Hazard, Kentucky (specifically, Hemlock Street) was far less harrowing or filled with (shock, horror) Evangelicals. Again from the article:

My parents were proud, old-school, pro-union leftists. In our house, there was no question that feminism is a good thing. Because of my father’s military service, we moved around a lot; I went to six different schools in one state alone, and we also spent part of my childhood in Europe. I was lucky. Most of the Southern girls I grew up with never got far from home, where their evangelical parents force-fed them toxic nonsense: They must be “sweet,” they should look forward to motherhood as their ultimate (and only) accomplishment, men know best, and gender is absolutely binary. The pressure on them was immense, and they lived in a state of disillusionment which I pitied as I watched many of them eventually surrender to patriarchal norms. As a child, my close friend was a tomboy who despised her family’s views, often skipping Sunday school to read “radical” books. By the day of her wedding, she had become a prim churchgoer and Republican. Her tone with me in adulthood was harsh, as if she resented or feared me for not following the same path. Shortly after she married we lost touch and never spoke again.

“Sweet”, and “men know best”? Not the women I knew. Maybe in Atlanta. I think women ruled society there too. I don’t know where this mythical place was. Maybe some towns, somewhere, but not just in the South. Since those times, I have lived in many States. They all have places where there are small and closed minds.

Here is some sparkling repartee regarding Hampton’s book:

Sparkling! These White Liberal women are so out of touch with average women of any color they just cannot see it. The tone that Hampton takes is evident in these paragraphs:

In her famous article “The Only Moral Abortion is My Abortion,” Canadian activist Joyce Arthur documents abortion providers’ experience with anti-choicers seeking abortion care. The abuse these patients heap on healthcare workers is both appalling and illuminating. They believe they are special, an exception to the rule, and more entitled than other pregnant people, whom they believe to be beneath them.

Such entitlement is of course the flip side of their unique brand of oppression. In order to fully internalize the misogyny keeping them down, conservative women have to buy into the white supremacist practice of placing them on a pedestal. What else is the right-wing agenda for? The “pro-family” cause crumbles unless my childhood friend—or my former boss, or any of my old students—accepts that her cage is a gilded one, and willingly enters it, locking the door behind her. There is tremendous psychic comfort in submitting to tyranny, and doing so allows white evangelicals to elevate and separate themselves from people like me.

What else is the Right-Wing Agenda for? Smaller government, individual freedom, lower taxes and not murdering babies. No cages for the women I know.

White Liberal women just have their sick obsession with abortion.