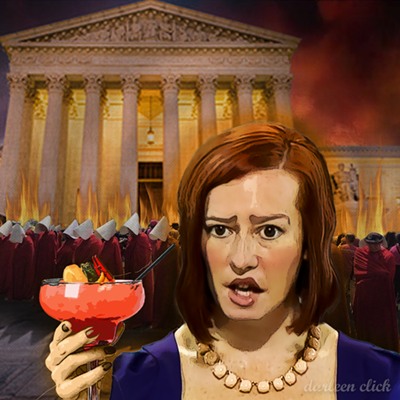 Suddenly the White House has changed its mind. SCOTUS protests, which were totally fine and acceptable on Friday are no longer justified. What changed?

Rain did not stop dozens of pro-choice protesters that took to the streets of Chevy Chase, Md. to pay a visit to the homes of Chief Justice John Roberts and Justice Brett Kavanaugh.

“You don’t get to take away my bodily autonomy and get enjoy your Saturday at home. You can do one or the other,” said Nikki Enfield who is outraged by the leaked draft opinion indicating the Supreme Court is poised to overturn Roe v. Wade., ending the constitutional right to abortion.

The addresses of the SCOTUS Justices were doxxed and posted online. It doesn’t matter that the radical leftist group Ruth Sent Us tried to excuse it by saying the pins were “nearby,” the fact remains, SCOTUS Justices were doxxed and rabid anti-abortion protestors responded over the weekend. Besides, Jen Psaki flat out said people were just being “passionate” about their beliefs.

Therefore, with the White House’s tacit approval, protests outside the Justices homes commenced.

Oh, but those weren’t the only protests over the weekend! Nope, multiple churches were vandalized, and quite a number of services were disrupted by idiots wearing Handmaid’s Tale costumes. This is a prime example of how to respond – kick them out.

Then came reports of a pro-life organization being targeted over the weekend.

Vandals set a fire inside the Madison headquarters of the anti-abortion group Wisconsin Family Action early Sunday, police and an official with the group said Sunday.

It wasn’t “just” a fire. It was an outright attack on those who support life.

The outside of the building also was sprayed with graffiti depicting an anarchy symbol, a coded anti-police slogan and the phrase, “If abortions aren’t safe then you aren’t either.”

That is by no means, a simple act of teenage vandalism. Especially since remains of at least one if not more Molotov cocktails were found.

As protests over the weekend continued, we find out that Justice Alito and his family might’ve been moved had for their safety.

All of which has led to the White House, with Jen Psaki in the lead, changing their tune. Suddenly the protests by passionate scared people are no longer justified.

.@POTUS strongly believes in the Constitutional right to protest. But that should never include violence, threats, or vandalism. Judges perform an incredibly important function in our society, and they must be able to do their jobs without concern for their personal safety.

Sorry Jen, but your statement just doesn’t fly. You don’t get to claim the protests were never justified. You, the White House, and all Democrats should’ve condemned the planned protests from the get go. Those of us who’ve been paying attention these last two years KNEW that the protests would escalate. We KNEW that they wouldn’t stop at costumes, signs, and chanting. It was inevitable that there would be protestors trying to verbally and physically intimidate others. It was inevitable that, given your tacit approval, there would be vandalism and violence. Even members of the media are advocating for violence.

Your circle back, walk back, belated concern and scolding just won’t fly here. You gave approval. You don’t get to spin this time and claim the protests never were justified.

UPDATE: Supposedly the White House is condemning the Wisconsin attack.

“President Biden strongly condemns this attack and political violence of any stripe. The President has made clear throughout his time in public life that Americans have the fundamental right to express themselves under the Constitution, whatever their point of view,” a White House official told The Hill.
“But that expression must be peaceful and free of violence, vandalism, or attempts to intimidate,” the office added.

If the White House REALLY thought this attack and the protests aren’t justified, Biden would go on record saying so instead of having some anonymous White House official issue a weak sauce statement.