Previous post
Opinion: Vikings and Why the Left Hates Us

Next post
Supreme Court Leak: You Say You Want a Revolution? 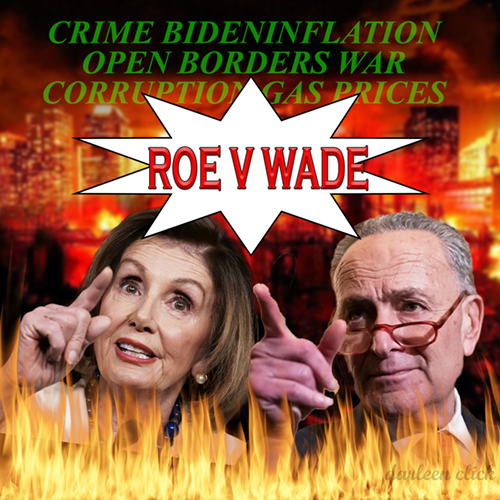 No sooner had the egregious insurrectionist leak from SCOTUS happened, the Dems went public with their talking points. Chuck and Nancy led the way.

“If the report is accurate, the Supreme Court is poised to inflict the greatest restriction of rights in the past fifty years – not just on women but on all Americans.

“The Republican-appointed Justices’ reported votes to overturn Roe v. Wade would go down as an abomination, one of the worst and most damaging decisions in modern history.

“Several of these conservative Justices, who are in no way accountable to the American people, have lied to the U.S. Senate, ripped up the Constitution and defiled both precedent and the Supreme Court’s reputation – all at the expense of tens of millions of women who could soon be stripped of their bodily autonomy and the constitutional rights they’ve relied on for half a century.

“The party of Lincoln and Eisenhower has now completely devolved into the party of Trump. Every Republican Senator who supported Senator McConnell and voted for Trump Justices pretending that this day would never come will now have to explain themselves to the American people.”

Let me just stop right there. As Shelby wrote here, this leak is unprecedented. It is wrong on EVERY SINGLE LEVEL. This leak has weaponized the court and this happened because insurrectionists want to intimidate the court into keeping a legal precedent in place. Yes, you read that correctly, Roe V Wade is a legal precedent. It is not and never has been law.

Furthermore, this was a DRAFT opinion. Justices typically meet once a week to discuss cases and hold a vote, then a majority draft opinion is written and passed around for discussion. This draft took place on February 10th. How many iterations have there been since then? Who knows. Chief Justice Roberts has confirmed the draft and ordered an investigation.

BREAKING: Chief Justice John Roberts has directed the marshal of the Supreme Court to launch an investigation into the source of the leaked draft opinion overturning Roe v. Wade, which Roberts verified as an authentic document pic.twitter.com/vcq4lTY7bk

Yet the Dems received their talking points and are running down the road full speed ahead.

Washington State’s Jay Inslee is insisting that the state will remain pro-choice even if the legal precedent is overturned. According to New Jersey Governor Phil Murphy, this is a “dark day in America.” Kathy Hochul of New York has the sads as her granddaughter might have her choice yanked away from her.

NEW: We are proposing an amendment to enshrine the right to choose in the California constitution.

We can’t trust SCOTUS to protect the right to abortion, so we’ll do it ourselves.

And, here in Colorado – Polis speaks.

In light of the reported decision of the Supreme Court to overturn Roe v. Wade, CO remains a state where freedom is respected and where any person has the ability to live, work, thrive, and raise a family on their own terms. pic.twitter.com/kqz75vEJ8J

Notice something about all these talking points? The Dems are insisting that states rights will take precedent. Yet at the same time they are whining that this SCOTUS draft will take away women’s right to an abortion. Except that the draft EXPLICITLY outlines that the power to legalize or restrict abortion must to go BACK to the states instead being adjudicated on the federal level!

This is not spontaneous folks. This was planned. I and many others thought as much last night. In fact, I’d be willing to bet this has been planned since the Kavanaugh hearings. Remember what Chuck Schumer said on the Capitol steps?

In his hearing, Kavanaugh said he worried about what the partisan attempts to destroy his reputation with horrific and unsubstantiated allegations would mean for the country. Schumer, by contrast, called out Justices Kavanaugh and Neil Gorsuch by name and said that if they didn’t achieve his preferred pro-abortion outcome in an upcoming ruling, “you will pay the price” and “you won’t know what hit you.”

That attack was so despicable that Chief Justice John Roberts issued a statement.

Again, I can only conclude that the SCOTUS leak was planned. Dems are on record from the federal to the local level for wanting abortion on demand, no matter when, which includes after the child is born. California allows that, and Ralph Northam, former VA governor, advocated for that atrocity.

Here’s a final point to this. While the Dems castigate and weaponize the court, this is a reaction from one very disturbed individual.

The Dems and rabid leftists are cheering the weaponization of our judicial system. They are wrong to do so. This move, applauded by the left encourages or hopes to force courts to act according to their narrative instead of acting in accordance with the law and our Constitution. Justice Alito is very correct in this paragraph of the draft opinion.

“We cannot allow our decisions to be affected by any extraneous influences such as concern about the public’s reaction to our work,” Alito writes. “We do not pretend to know how our political system or society will respond to today’s decision overruling Roe and Casey. And even if we could foresee what will happen, we would have no authority to let that knowledge influence our decision.”

While the Dems and left continue their lockstep march of talking points and push to burn it all down, every single judge from the federal to local level should be on notice. Do NOT let your decisions be influenced by outside narratives of any kind. Ever.