Next post
Thomas: Court Leak Is Infidelity Of Highest Order 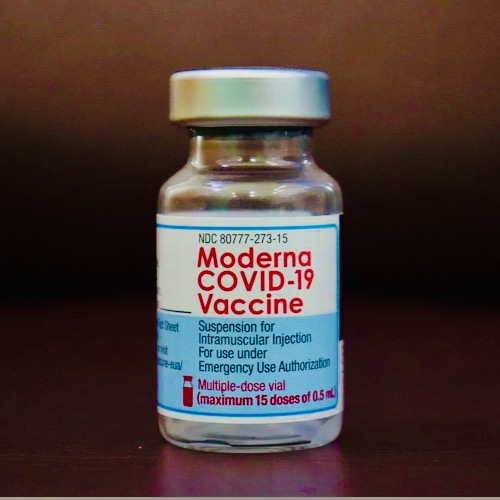 Disinformation was pushed by the White House late yesterday afternoon. The tweet caused jaws to drop with a collective CLUNK.  This is exhibit A as to how tone deaf the White House is.

When President Biden took office, millions were unemployed and there was no vaccine available.

In the last 15 months, the economy has created 8.3M jobs and the unemployment rate stands at 3.6% — the fastest decline in unemployment to start a President's term ever recorded.

First, the economy portion of the tweet is idiotic and wrong on all levels. People have left the workforce entirely, so the decline in unemployment isn’t really anything to cheer about. Secondly, the 8.3 million jobs created aren’t NEW jobs, it’s the old jobs that were vacated during the lockdowns. So again, nothing to cheer about while we deal with record inflation, which is at a 44 year high.

However, it’s the FIRST part of the tweet that is getting attention. This has economic and vaccine disinformation written all over it!

Let me count the ways.

When did the Moderna and Pfizer vaccines become available? Late November of 2020. WHO was in office then? President Donald J. Trump.

WHY were millions unemployed at that time? Because of the asinine lockdowns which cratered multiple small businesses, and caused many companies to pare down their workforce.

When did Joe Biden get his first vaccine shot? Why, it was an early Christmas present! December 21, 2020 to be exact!

He wasn’t President then either! Now I don’t know who the hell is running the White House twitter feed, but the ratio that tweet is getting is flat out amazing! Even more amazing is that that tweet is still up! Here’s a screen shot if it suddenly disappears. 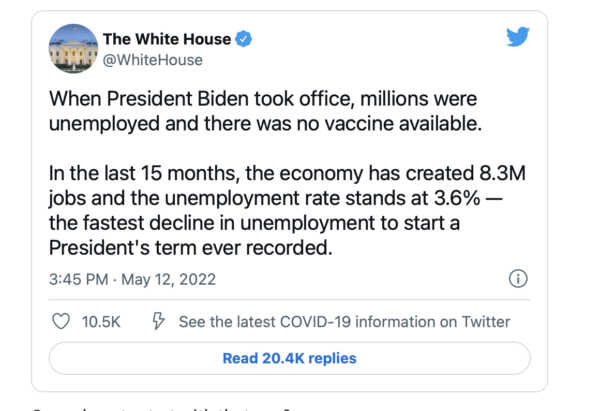 Here’s the interesting thing about this vaccine disinformation pushed by the White House. EVERYONE on all sides is dragging them hard for this. By everyone, I mean even CNN’s Daniel Dale and the Washington Post are fact checking this. 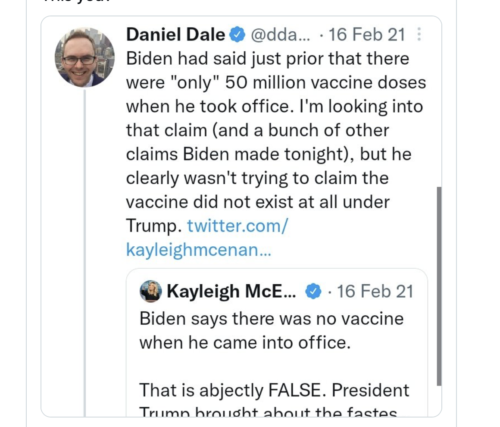 Who’s manning the @WhiteHouse Twitter account? Delete this false tweet. Biden himself has said 8% of seniors had gotten the vaccine on the day he took office. Biden was one of them. —> https://t.co/ojDmn1DNIQ https://t.co/V7z07DHQ90

When you lose the Washington Post fact check guru AND CNN all in the same day, yet leave your vaccine disinformation up, I can only surmise that folks in the Biden Administration truly thought no one would disagree with them. Furthermore, they must think people have really short memories, and are finding out the hard way that we do remember!

Fox News contributor Joe Concha asked his fellow Twitter users, “Anybody got the customer service line for the new disinformation board?”

“Everyone should go through the process and report this for misleading information,” tweeted U.S. Congressional candidate Vic DeGrammont.

Townhall.com web editor Rebecca Downs slammed the White House for the information on both the vaccine and its economic boast. “Not only was the vaccine available, for POTUS to get it, but @RealClearNews has him at a 37.1% approval rating on the economy,” she tweeted.

“The vaccine was already out. How is this tweet not disinformation?” tweeted actor and author Ross Patterson.

Why yes, where is the Mary Poppins Ministry of Truth guru when you need her??!!

What is even more egregious about this vaccine disinformation is that, while the Biden Administration is mourning the one million lives lost during this Covid mess, there are plans afoot to ration future vaccines.

Among the sacrifices being weighed are limiting access to its next generation of vaccines to only the highest-risk Americans — a rationing that would have been unthinkable just a year ago, when the White House touted the development and widespread availability of vaccines as the clearest way out of the pandemic.

But as the government’s cash reserves dwindle, officials are increasingly concluding that these types of difficult choices will soon have to be made. And they are quietly preparing to shift responsibility for other key parts of the pandemic response to the private sector as early as 2023.

“There’s a great deal of concern that we’re going to be caught shorthanded,” said one person familiar with the discussions. “On the face of it, it’s absurd.”

The ones with the highest risk SHOULD be first in line for vaccines! Secondly, I find it amusing and infuriating that we are throwing billions of dollars around the world, yet no one is minding the medical store.

The takeaway is this: The White House can spread all the disinformation it wants. Never mind the ratio, there will be zero consequences for peddling wrong think!