Next post
Hollywood Gets Nose Tweaked At Golden Globes 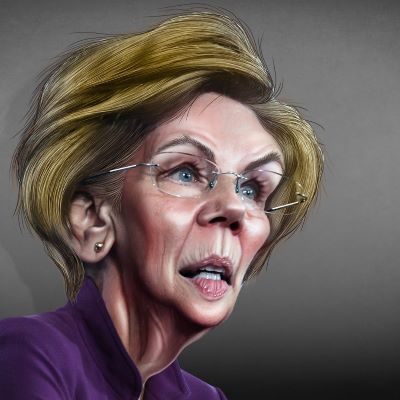 Of all the asinine liberal hot takes on the operation that finally sent IRGC-QF commander Soleimani to hell where he belongs – and there were plenty – the dumbest and most clueless so far belongs to Elizabeth Warren.

Screeches With Fist suggested this morning on CNN’s “State of the Union” that the timing of the operation targeting the Shia militia terrorist commanders in Iraq was… auspicious.

Next week, the president of the United States could be facing an impeachment trial in the Senate. We know he’s deeply upset about that, and I think people are reasonably asking why this moment… Why does he pick now to pick this highly inflammatory and highly dangerous action that moves us closer to war?

Gee, I don’t know, Heapum With Dung. Maybe it’s because Soleimani authorized a strike on an Iraqi military base that killed an American.

Maybe it’s because Soleimani was a designated terrorist who was on foreign soil directing operations against the United States.

Maybe murdering an American – after all the indirect fire attacks by Kata’ib Hizballah and other Iran-controlled militia scum over the past year, attacks on oil infrastructure, all the Iran-funded attacks on Israel, and other Iran-supported and directed attacks on US interests – was the last straw.

I’m pretty sure, however, that Lieawatha doesn’t care much about facts. The supposedly “smart” Democratic presidential candidate desperately craves attention, as her “plan” to control everything from the way we work, to what we earn, to her scheme to steal money from those Warren claims are too wealthy to fund her big-government schemes, are being shown to be imbecilic, despite her protestations to the contrary.

Top economists are wrong, according to Warren, and Trump launched an operation that took out the world’s most powerful, active terrorist because IMPEACHMENT!

The impeachment trial that will supposedly take place with a strong Senate majority?

The impeachment trial for which House Speaker Nancy Pelosi hasn’t even named case managers yet?

Let’s give Screeches While Lying a clue here: despite his frenetic tweeting, Trump probably cares very little about this upcoming impeachment trial. The Senate has a solid Republican majority. There’s nothing in the Constitution that requires the Senate to even hold a trial. There’s no way two-thirds of the Senate will vote to convict, as required by the Constitution, given the incredible shrinking impeachment that went from OMG RUSSIA COLLUSION, to OMG BRIBERY AND EXTORTION, to OMG EMOLUMENTS CLAUSE, to OMG UKRAINE, to OMG ABUSE OF POWER and OMG HE WAS MEAN TO CONGRESS!

There’s only one reason why Trump ordered the strike that finally took out Soleimani – he represented a clear threat to the United States, our allies, our assets, our troops, and the West writ large. It was high time that terrorist piece of crap was eliminated from this earth.

But Warren needed the attention. Warren needed to inform the populace that she’s still there, resisting Trump, no matter how stupidly. Warren’s numbers are declining among Democratic activists in Iowa, Nevada, New Hampshire, South Carolina, and Washington, DC, and you know what that means: she’s probably not progressive or anti-Trump enough for the shrieking proglodytes of the Democratic party.

And it’s entirely possible that even the screeching prog-magnon, latte-swilling demorrhoids are sick and tired of her efforts to pretend she is one of them. From Sitting Bullshit’s attempt to pretend she’s Native American to gain unfair advantages, to her lying about being fired when pregnant, to her false claim that her children attend public schools, to her false promise to serve a full Senate term if elected in 2018, to her claim that her father was a janitor – maybe even the clueless progressives are beginning to realize that she’s not working class, she’s not a minority, and she’s not one of them.

Warren is a lying, elitist, screeching multi-millionaire, who will say anything to get elected.

Maybe her time is finally done.