Previous post
Roundup Time: No More Quiet Parts, It's All Out Loud 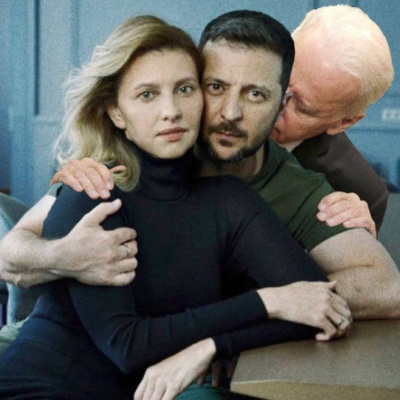 Now why didn’t Winston Churchill think of Vogue magazine to promote Great Britain’s plight in World War II? Lord Churchill could have sat in bombed out buildings in London, with his wife Clementine, and posed with the appropriately bored pout. Anna Wintour and Annie Leibovitz hadn’t quite been born yet, but what a coup for some publication. Back in the olden days, posing for chic photos for public consumption while your countrymen were being slaughtered was not the done thing. Behold Volodomyr Zelenskyy and his wife Olena Zelenska. It’s all for Ukraine, doncha know?

This war of Russian Aggression in Ukraine smells like a post-orgy Hunter Biden hotel room. I despise Vladimir Putin. He is an evil, evil man. He understood the weakness of Creepy Joe Biden, especially after Biden gave Putin permission for a “minor incursion” in Ukraine a good month before the fighting actually started, but a full year after Russia had begun amassing troops on the border.

Speaking of Creepy Joe Biden. How weird is it that Joe says he went to Ukraine 12-13 times while Vice President, his son got a job and Joe threatened to withhold $1 billion in loan guarantees if Ukraine didn’t fire the prosecutor who was looking into Hunter’s job? And now, we are pumping billions into Ukraine? Remember?

Speaking of billions of dollars. We have given $7 billion to Ukraine, more than the first five years of the war in Afghanistan. We are broke. And, I worry that this is just a way to funnel more U.S. dollars back to the Bidens’ and the defense industrial complex. Tell me I am way wrong?

The Vogue article is titled: “Portrait of Bravery: Ukraine’s First Lady, Olena Zelenska “. Is that a joke? While Ukrainian mothers are burying their children and women stand on the front lines of this abortion of a war, Olena is brave? Feck everyone at Vogue and both Zelenskyy’s.

The writer of this glowing fan article, Rachel Donadio, informs her readers that names are gendered in Slavic languages. That is why she is Olena Zelenska and not Zelenskyy. Wouldn’t want any of the delicate and elite Vogue readers to get offended. How does Donadio combine war deaths and fashion? Here you go from the article:

In our two conversations in Kyiv, Zelenska was forthright, dignified, elegant, a subtle promoter of Ukrainian designers. On one day she wore an ecru silk blouse with a black velvet bow tied around the neck and a black mid-calf skirt, her ash-blond hair swept up in a loose bun. The next day, it was wide-leg jeans, chunky white sneakers with yellow and blue detailing, a nod to the Ukrainian flag and a fundraising project by the brand The Coat, her hair loose on her shoulders, and a rust-colored button-down shirt. I couldn’t help but think the shirt had the same rusty hue as the burned-out Russian tanks that I saw lining roads in Irpin and Bucha, suburbs of Kyiv where Ukraine pushed back the Russians. In Bucha, the site of a now infamous mass grave, investigations are underway to determine if Russia committed war crimes. I asked Zelenska how news of Russian atrocities in Bucha had changed the game. “The first weeks after the war broke out we were just shocked,” she said. “After Bucha we understood it was a war intended to exterminate us all. A war of extermination.”

Rust colored shirt and burned out Russian tanks? These people lack any self-awareness at all. Then, there is this:

It is strange to talk about Ukrainian extermination and Ukrainian fashion in the same conversation, and yet this is the cognitive dissonance of today’s Ukraine, where designers and professionals of all kinds are mobilizing at home and abroad to support their country. That cognitive dissonance is especially true in Kyiv, where you can sip a matcha in a café and then drive an hour to Bucha to visit a mass grave. It is hard to get one’s head around it all.

The photos by Annie Leibovitz are the perfect accompaniment to this article. Check out this photo that appears to be Zelenska standing by a destroyed passenger jet with perfect windswept hair and the blue of the coat highlighting her complexion. She is surrounded by armed mannequins in U.S. digital camo. Can we charge Vogue for the use of our military accoutrement or does Ukraine own it now.

As they say, if there isn’t video, it didn’t happen. This video is in Spanish, but you don’t need to understand it to understand the photoshoot:

Olena so brave. Volodymyr is so brave. The Vogue pictures perfectly capture how screwed we poor normies are. Winston Churchill had a great speech that fits here so perfectly:

We are so screwed.