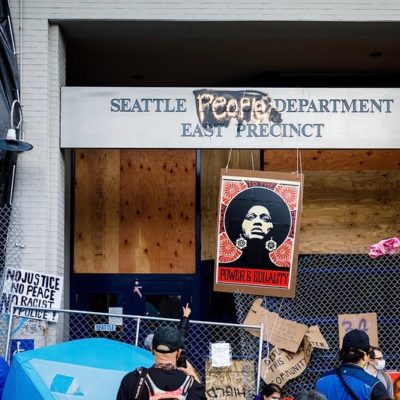 As riots and protests continue across the country, the northwestern cities of Portland and Seattle have seen increasing violence and crime in the name of “justice”.

This is just one of the many scenes in Portland, Oregon. This is happening all while “peaceful” protestors are burning American flags chanting, “No Justice, No Peace”.

The opposite of peace? War. Chaos. Violence. And Portland and Seattle Police Chiefs are calling it out. This from Seattle Chief of Police, Carmen Best, when protestors marched to her home:

These direct actions against elected officials, and especially civil servants like myself, are out of line with and go against every democratic principle that guides our nation. Before this devolves into the new way of doing business by mob rule here in Seattle, and across the nation, elected officials like you must forcefully call for the end of these tactics.”-Carmen Best

Best implored Seattle City Council President, Lorena González, asking her and the rest of the council to call for an end to the tactics of showing up at homes of elected officials and civil servants. Individuals who saw the mob move towards Best’s home described the scene as “large, aggressive, and concerning“.

Just yesterday, Portland Police Department Chief Chuck Lovell, penned an Op-Ed in The New York Times about the “mostly peaceful” protests that have been raging in Portland for months.

During these events, our agency has responded to assaults, stabbings, shootings, people with guns and the stockpiling of explosives. Shooting off commercial-grade fireworks and mortars is not peaceful protest. We are fortunate that no one has been killed.

There are those who say the Portland police have not done enough to quell violence. I ask them to come speak with our officers, who have been responding for two months to protests. They have served with professionalism, courage and resiliency through an extraordinary time. Many have been injured and some have received threats of violence to themselves or their families.

The voices of victims are not heard as well. Because of the protests, officers have not been able to respond to 911 calls or have been delayed for hours. Investigators’ cases lie on their desks as they work nights to process arrests. We have seen an alarming increase in shootings and homicides. We need to redirect our focus to preventing and solving these crimes that are taking a hugely disproportionate number of minority lives.-Chuck Lovell

I’ll admit, I have made fun of the stereotypical Portland progressive pasty, Kombucha-drinking, white guy, out in the streets protesting and donning his dirty, germ-laden virtue mask that he claims to wash every day even though he’s worn the same pair of underwear for a whole week. While he may be chanting and holding a sign, he is cheering on this violence…and this, is not a laughing matter. While a bunch of white people are out atoning for their privilege by waving signs and blaming all of the police in this country as a whole for the death of George Floyd, factions are taking over in our cities and people are getting killed. This is the grim reality of the “protests” that all of a sudden, are no longer about George Floyd. Protestors have called this violence a “useful tool” for change. Those mortars? Useful tools. Looting? Useful tools. Shootings? Deaths? All collateral damage in the war on justice. Yes, even a 16 year-old young man. Doesn’t matter he may have been on the side of the residents of the CHOP. The violence was necessary-a useful tool. Think of his life as you would an “unplanned donation” when that person hopped in your tent as you were camping during the “Summer of Love” and stole your MacBook. Necessary theft. Someone needed it.

This is the answer violence gets us in Minneapolis. A police department that tells residents to cooperate with criminals:

Do not argue and do not fight with the criminal. Do what they say. Your safety is the most important.”-July 28 letter to residents of the Third Arrondissement in Minneapolis

While white social justice warriors will quote literary works they have read in that one class they took in college and present to actually want to have true discourse with you, the truth is, they haven’t a clue. (Don’t argue with them, either.) They will thumb their septum-ringed nose down on you and want to “inform” those they deem less intelligent than them with articles on racism, written by other elite or upper-middle-class white journalists and professors and will claim to defend the honor of Black Americans nationwide. They will conveniently ignore the perspectives of Black police officers like Best and Lovell because it does not fit into their little narrative. The Black businesses have been torn apart and looted, Black lives that have perished and Black police officers that are putting themselves out there every day are the voices they are not hearing because theirs are so overwhelmingly loud. Why? Because they have this distorted sense of entitlement and self-importance and need to be heard. Want to see white supremacy in action? Look no further than the brutality and violence of the left-wing white people sitting in their gated communities and on their islands and criticizing the police. Then juxtapose their platitudes with the utter destruction of these cities. They think they have the answers. “Peaceful protest” giving way to violence is not one of them.