Next post
Netherlands To Seize 3,000 Farms In Name Of Climate Change 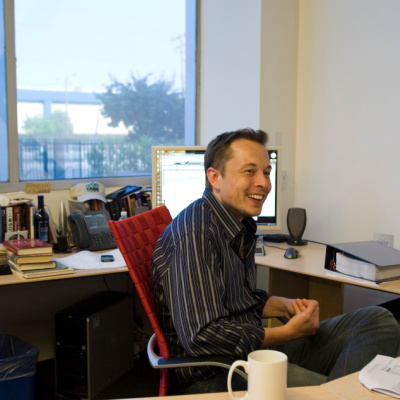 Can the White House briefings get any dumber? Yes. Of course. Yesterday, a White House hack journalist (redundant) asked Press Secretary Karine Jean-Pierre (KJP) whether the White House had a plan to keep Twitter from becoming a “vector” for misinformation. Lord, help us. The press cannot allow the Bubbas (that’s you and me) unfettered access to free speech.

As with President Donald Trump, Elon Musk had a good life. He didn’t have to jump into the shark infested waters. People clamored for his Tesla’s, cheered his SpaceX launches, and hailed him as a hero for keeping the internet up in Ukraine with Starlink. But then, Elon bought Twitter. Dun, dun, DUN. Now, Musk facing a Trumpian never-ending shite storm from the little brains of the Elitist Class. They fear nothing more than losing their grip on the narrative. They fear losing control.

Take yesterday for instance. A hack journalist by the name of Andrea Shalal, of Reuters, is worried about Twitter becoming a “vector” for misinformation. Normies read that as more people speaking freely. Here is the receipt:

Reuters's Andrea Shalal to KJP on @ElonMusk owning Twitter: "There's a researcher at Stanford who says…this is a critical moment…ensuring…Twitter does not become a vector for misinformation…Are you concerned about that & what tools do you have?" pic.twitter.com/OIKRmIusla

Speaking of tools. Miss Shalal is a tool. She is worried about Twitter becoming a vector for misinformation? For the last two decades, at least, the Legacy Media has been the major vector for misinformation. To have a reporter, whose job SHOULD be challenging the White House story, ask KJB what tools they have to shut down free speech is gobsmacking. She full on fears more people joining Twitter and speaking freely. She doesn’t want us sharing laundering tips or Vitamin D to fight Covid or voting irregularities. Here is Andrea Shalal:

Here is the Reuters' Andrea Shalal reporter who is very concerned about free speech on Twitter.
She asked what is being done to prevent the platform from becoming a "vector for misinformation."
All the things happening in our country right now she has to fabricate another issue pic.twitter.com/UwLsIeTR0u

She looks like her hobby is asking to see the manager at Neiman Marcus.

If KJP wasn’t a fascist herself and had a brain, she would have just said, “We believe in freedom of speech. We do not have tools to prevent Twitter from becoming a vector for misinformation. That is for the American people.” Instead, KJP insulted us all by stammering about violence. Again, the receipt:

What does KJP mean “monitoring”? That’s why Elon Musk should be askeered. As Not the Bee put it:

Now that alternative views can get out and people are free to engage in open debate, they are crying “misinformation” and suddenly the guy who brought us next-gen electric cars and rockets is Hitler. In the meantime, we’re supposed to pretend that the leftist reporters begging the White House for authoritarian collusion between government and private companies aren’t Nazis.

And, they do, hate you, that is. Three weeks ago, Deanna wrote a post about the journos reaction to the Musk/Twitter scene. She included this tweet: 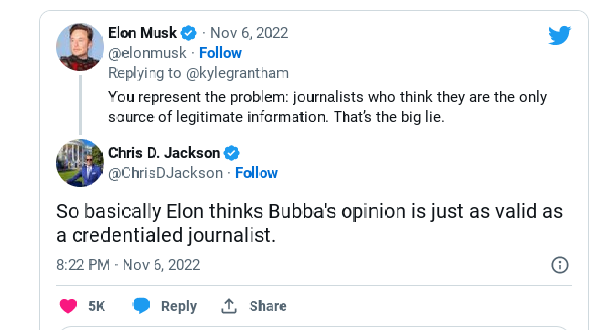 The credentialed journalists have gotten it all wrong recently. From the Steele Dossier and Covid to the Biden laptop. Forget about the invasion as the Southern Border. They are incurious and parrot the official narrative. Bubba would do a much better job, because Bubba has common sense. And in Bubba’s world, you can’t lie to yourself about the truth.

Finally, let’s look at a couple of the definitions of vector:

2
a
: an organism (such as an insect) that transmits a pathogen from one organism or source to another
The insect vector in malaria is the anopheline mosquito, a genus comprising many species around the world.
Frank Graham, Jr.
compare CARRIER sense 5a, RESERVOIR sense 3
b
: POLLINATOR sense a
3
: an agent (such as a plasmid or virus) that contains or carries modified genetic material (such as recombinant DNA) and can be used to introduce exogenous genes into the genome of an organism

Sort of like parasites or symbiotes. Sounds like journalists. Vector this. Go Elon, go. More speech, not less. 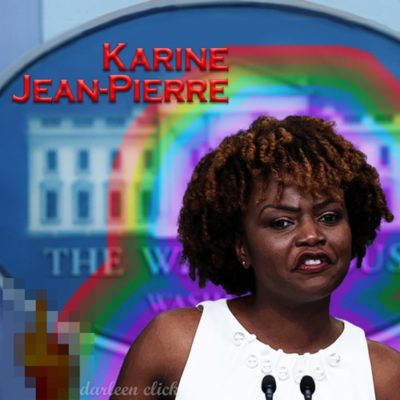