Previous post
Kasich To Team Up with Michelle O and Bernie

Next post
China Retaliates In Hong Kong With Media Arrests 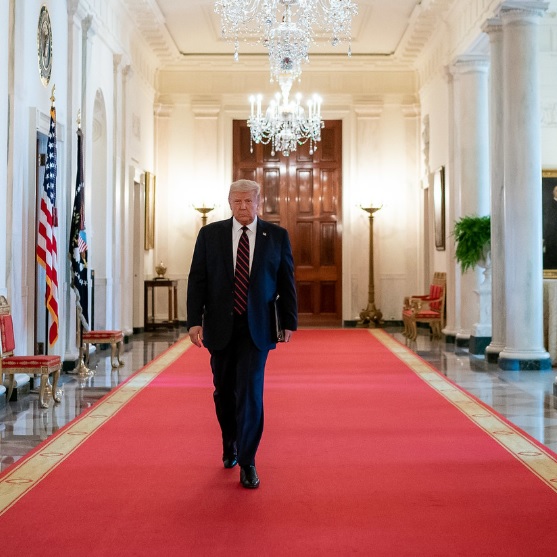 I think we can all agree that the COVID-19 recovery bills have been a disaster. But the bigger disaster at this point is for President Trump to not do anything.

On Saturday, Trump signed four executive orders in order to keep unemployment relief going after Congress failed to make a deal (thanks to Nancy Pelosi’s desire to use any kind of relief package as a pork-filled goodie bag). No, I don’t like the use of executive orders when the legislature fails to act. But the optics are good for the president.

Trump announced a $400-per-week supplemental unemployment payment to out-of-work Americans — short of the $600 weekly benefit that expired at the end of July. He unveiled an extension of student loan relief and protections from evictions for renters and homeowners.”

Trump also issued a payroll tax holiday through the end of the year for Americans earning less than $100,000, while promising more relief if he wins a second term.”

The president signed the executive actions from his Trump National Golf Club in Bedminster, N.J., as club members cheered him on. He blamed Democrats for the coronavirus stalemate in Congress and said he’d take matters into his own hands.”

There was also an executive order covering rent and mortgage and evictions – things that normally, should not be the purview of the federal government. It’s a signal as to just how much the government-imposed lockdowns have wrecked the economy that you don’t see a boiling mass of conservatives freaking out over this kind of executive order, as this can be reasonably interpreted to fall under the “takings clause” of the Fifth Amendment. In the interest of public health, the government has forcibly closed businesses and people have lost their jobs. The burden then falls on government to “make people whole,” as it were.

Which is why Democrats are more than welcome to follow up on their threats and sue President Trump for using executive power in order to provide relief to Americans. Pelosi and Chuck Schumer issued a joint statement, which contains this particular gem right in the middle.

“Furthermore, these announcements do nothing to increase testing, nothing to reopen schools, nothing to put food on the table for hungry families, nothing to prevent heroes being laid off across state and local government, nothing to protect the Postal Service or the integrity of our elections, nothing on many critical needs of the American people.”

Wait, I thought this was about unemployment and rent relief – which would help “hungry families.” And the Postal Service? Election integrity? If that doesn’t sum up the Democrats’ priorities in their negotiations, I don’t know what does. Plus, the Democrats usually think EOs can do ANYTHING, except when they do things they don’t like.

The legalities of the EO are sure to be hotly debated, but what isn’t up for debate is that too many people have had their economic stability absolutely wrecked by the lockdown. The extra $600 a week in the first relief bill was too generous, as personal income increased on the strength of those payments and kept some from returning to work when they were able to (I have a few personal anecdotes about that one). The compromise of $400 a week extra still seems too high, but perhaps psychologically it is for the best, as a step down in the size of the government cookie jar might be the best approach in eventually doing away with the supplemental unemployment bonus.

What Pelosi and Schumer are truly mad about is that with the signing of these EOs, Trump looks like he cares about the welfare of the American people in getting through this pandemic more than they do. And they can’t stomach that.