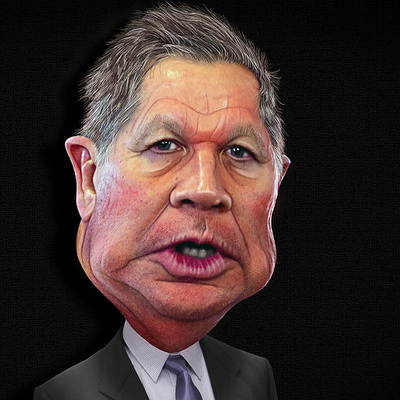 John Kasich must think he’s still relevant. Because at the (virtual) Democratic Convention, he’s teaming up with Michelle Obama and Bernie Sanders, according to a CNN source who has seen convention plans. The Terrible Trio are expected to make a splash on the first night of the convention, which carries the theme “Uniting America.”

Rumors have been floating for a while that Kasich would appear at the convention, which will open in Milwaukee on August 17.

Then Politico reported on Friday that Kasich and Bernie Sanders were teaming up for a “night of unity” at the convention. How a so-called “Republican” could join forces with a socialist is beyond me, but here we are.

Finally, CNN dropped the hot news on Saturday: Queen Bee Michelle Obama is also joining up with Kasich and Biden. Her presence will supposedly lend cred to Kasich’s turncoat performance, since she’s über popular among Democrats.

In addition, has-beens Hillary and Bill Clinton will speak on Wednesday from their home in Chappaqua on the eve of Joe Biden’s acceptance speech. Biden will make the speech from his basement, or somewhere else in Delaware. Who knows?

Other participants may include Danica Roem, a transgender person who is a member of the Virginia House of Delegates. Elizabeth Warren and Kamala Harris will speak, too. What a fine group of people John Kasich, the former Republican governor of Ohio, has allied himself with. 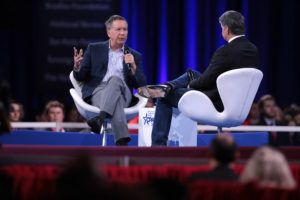 The editorial board of USA Today is doing a Happy Dance about John Kasich speaking. They call him a “respected elder statesman” from the battleground state of Ohio.

“Like Biden, he has developed a deep reservoir of respect by establishing a set of principles of public service and sticking to them.”

By appearing with Bernie and Michelle O at the Democratic convention, Kasich may think he’s a profile in courage. Speaking “truth to power,” as they say. Or giving a middle finger to Trump by openly supporting Biden.

Kasich is sharing the stage with Michelle O and Bernie Sanders simply because he’s an opportunist. Remember how he refused to get off the political stage in 2016 and stayed in the race until the bitter end?  He had only won his own state of Ohio, but became the GOP’s version of Lloyd Christmas from Dumb and Dumber. In that movie, when the woman of his dreams told Lloyd that his chances with her were one in a million, he said:

“So you’re telling me there’s a chance. YEAH!”

Moreover, if Kasich had such great misgivings about Trump becoming President, why didn’t he attack Trump on the debate stage? He didn’t. Why didn’t he work to rally primary voters around a conservative anti-Trump candidate when 60 percent of them had voted against Trump? As Dan McLaughlin postulates:

“If Kasich really believed that Trump’s character and fitness for office were a problem, he could have run a campaign dedicated to warning about that when he had the chance.”

But not every liberal is happy that Kasich is sharing a stage with Queen Michelle and The Bern.

What the hell are Michelle Obama and Bernie Sanders doing headlining with anti-choicer #JohnKasich at the Dem convention?

So why doesn’t John Kasich just jump ship and declare himself a Democrat? After all, in 2019, as Governor of Ohio, he vetoed a fetal heartbeat law. He said he has “evolved” on climate change and now supports subsidies for electric vehicles. He favors Medicaid expansion, too.

John Kasich thinks he’s heroic by appearing with Bernie and Michelle Obama at the Democratic Convention. He’s not. Other than the handful of NeverTrumpers, Republicans see him for what he is: a petty sellout who desperately wants to be relevant. Perhaps he and Joe Scarborough should start their own band and call it, “Legends in Their Own Minds.”

Go away, John Kasich. We hardly know you.