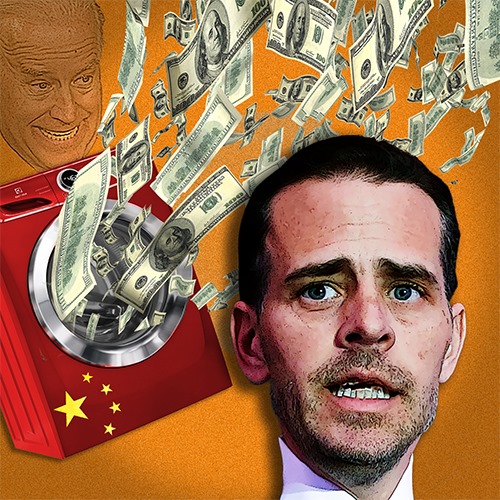 Tony Bobulinski was very clear with Tucker Carlson. Based upon his personal experiences with the Biden family, he believes that they, especially Joe Biden, have been compromised by China.

Bobulinski calmly laid out details of all his interactions with the Biden family concerning Sinohawk Holdings and the efforts to put together a profitable business deal with a Chinese energy company, CEFC. The sole beneficiaries of that deal? The Biden family.

Why are we learning about this and Tony Bobulinski now? Because in answer to the original NY Post stories regarding the Hunter Biden laptops left at a Delaware computer store, the media rushed into to smother the story. More importantly, Adam Schiff and Joe Biden went public with their claims that this was all Russia disinformation aimed at protecting President Trump. And the media went all in to help.

“Take a step back, and the Russian interference of 2016 holds valuable lessons on what to do and what not to do in 2020: We must treat the Hunter Biden leaks as if they were a foreign intelligence operation — even if they probably aren’t.”

Once Tony realized that the Bidens, Democrats, and the media would blame Russia while covering for the Bidens, he had to act. If it wasn’t for Schifty and the Biden family refusing to retract their statements, we would not know what Tony Bobulinski has. RECEIPTS.

“Although his meeting with Joe Biden occurred four months after Joe left the White House at the start of the Trump administration, Bobulinski is emphatic that the start of the Chinese deal, and Joe Biden’s involvement, came much earlier. He tells me he was recruited in 2015 by the man who wrote the “big guy” e-mail, James Gilliar, whom he describes as a former British intelligence officer.

In fact, Bobulinski says Hunter and James Biden had been working to introduce executives of a Chinese energy conglomerate to foreign government leaders around the world for two years.

“When I got involved, they were already saying the Chinese owed them $20 million for two years of work,” Bobulinski says. He recounts a dinner in a Manhattan restaurant where Hunter started shouting at one of the Chinese executives about the money, saying, “You owe my family tens of millions of dollars, why haven’t you paid?””

As the process went on, which included trips to multiple countries (Oman, Romania, Monaco, Kazakhstan, and others), it seems a few red flags started flying.

Bobulinski explicitly states that he met with Joe along with Hunter and Joe’s brother Jim in 2017 at their behest. At that time he learned there would be a percentage held for Joe by some family member. When asked if Joe planned to run for President and how that would affect the business deal, the answer was “plausible deniability” according to Jim Biden.

CEFC pledged $10 million dollars to the company. $5 million for initial costs and the other $5 for capital and growth. Except that the money never showed up and $5 million went to Hunter Biden instead.

Here we are with a deal that went south, and then the laptop story hits the airwaves. Democrats and media tell us there’s nothing to see here, MOVE ALONG! Joe snaps at folks daring to ask about it. Then, on the debate stage he says it’s RUSSIA! dammit!

Those receipts Tony has? LOTS.

"There should be no scenario that this isn't investigated," Bobulinski says, noting he only saw a small portion of Biden family business dealings with foreign agents. "I have every email, every text, every whatsapp that was exchanged and I have provided them to authorities."

Director at CEFC told Bobulinski that $10M funding would come in $5M loan to Biden family and $5M contribution to Sinohawk. Wasn't coming in and Bobulinski got worried when it leaked that Rosneft stake might be sold to CEFC. Then that director's U.S. visa was denied.

Says he asked Hunter if he went around SinoHawk to get the money from CEFC and Hunter said he hadn't, but that he was acting as the personal attorney to Chairman Ye. Bobulinski says it made him angry/frustrated, realizing he had been circumvented and that the Russia connection

Two things on this. About Patrick Ho.

“Ho was charged on Dec. 18, 2017 with conspiracy to violate the Foreign Corrupt Practices Act and money laundering related to CEFC China Energy contracts in Uganda and Chad. Ho had been an executive at the multi-billion dollar Chinese energy company prior to his arrest.

In addition to his partnership with CEFC, Hunter Biden also represented Ho during his legal battle.

According to a report from The New Yorker last year, CEFC’s chairman, Ye Jianming, raised concerns with Biden in summer 2017 about a possible investigation into Ho.

Biden agreed to represent Ho and to find out the extent of the investigation, according to The New Yorker report.

The New York Times reported in December 2018 that Ho’s first call following his arrest the year before was to James Biden, the brother of the former vice president.

Secondly, Hunter flat out told Tony that the company needed to be registered domestically so that Hunter wouldn’t have to register as a foreign agent. Hunter is now being actively investigated by one or more Senate committees for not adhering to FARA and Lobbying Disclosure guidelines.

Tony Bobulinski, after learning in multiple ways how he’d been undercut in the deal, including Hunter standing him up in Monaco because Ukraine dudes were more important, understandably wanted the Biden family to step up and quit blaming Russia. Instead what he got was Rob Walker telling Tony to shut up because this would bury the Biden family.

I watched the entire interview. Some claim Tony Bobulinski has an axe to grind. My answer? He went all in to pull specific deals together that would help their company grow. That one specific deal that was the lynchpin to future growth and viability benefitted the Bidens to the tune of $5 million, but left Tony and the rest of the company swinging in the wind.

Tony Bobulinski is now on record with massive amounts of documentation about his dealings with the Biden family. His life and his family’s life has been threatened. But he isn’t backing down.

Joe Biden’s history of grift is getting blown wide open because they finally pissed off the wrong guy. The chickens are coming home to roost.