Generally, when you fail to deliver on a project at work, there are a few things that are guaranteed to happen.  Being held accountable, or staying on the job until it is done, or maybe even being fired, all come to mind.

Not in government, though!  The old saying of “screw up and move up” was never more evident than in yesterday’s hearings of why the HealthCare.gov rollout was such a debacle.

Testifying in front of Congress, Cheryl Campbell of CGI Federal (the company paid to create and design the website) said, “we didn’t have enough testing time” and that CMS (the Center for Medicare and Medicaid Services, a branch of HHS) knew that there hadn’t been enough testing.

Translation: Not our fault!  Blame CMS!

CMS communications director Julie Bataille testified that yes, there wasn’t full scale testing done, but they had a “compressed time frame” in which to finish.

Translation: Not our fault!  We needed more time!  Blame whoever set that deadline of October 1st!

Whether they realize it or not, CMS has just blamed these two for why the rollout was such a colossal failure: 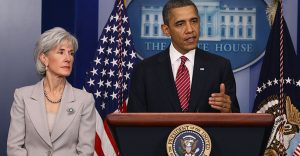 The president was the one who insisted that October 1st be the launch date, even touting it in speeches.  By the time he was giving that speech, CGI Federal already knew the site wasn’t ready, and they had told CMS.  Presumeably, CMS told someone at HHS, who then told HHS Secretary Kathleen Sebelius that the website wasn’t ready.

And if Sebelius knew, and she let President Obama give that speech, then she should be fired.

Or maybe President Obama knew, and told her to get it fixed, and gave the speech anyway.

I have no idea.

What I do know is that we have an administration who continually runs on the Lando Calrissian theory of government – it was always someone else’s job to fix the problem, and it’s not their fault that it didn’t get done right or on time.

The American public should be screaming at the top of their lungs, demanding some kind of accountability for this fiasco.  I hear only a low murmur, not a collective roar.  Our apathy merely guarantees that the “screw up and move up” mentality will continue to live on.  It’s sad that the American public, who would have no hesitation about sending a plate of food back to a kitchen at a restaurant if their order got screwed up, feels that this level of incompetence and finger-pointing is acceptable when it comes to government programs.