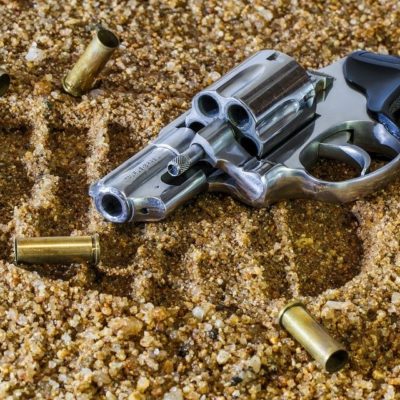 A alleged terror attack happened on United States soil on Thursday. Did anyone notice?

The details are fairly straightforward. The terror attack began at the gate, and thanks to the security guard on-duty, who was wearing a bulletproof vest, the threat was ended before it could get past the front gate.

The gunman tried to speed through a gate at the base in a vehicle and opened fire on security workers, U.S. officials told The Associated Press. A female sailor who is a member of the security force at the base was struck but was able to roll over and hit a switch that raised a barrier, stopping the vehicle from getting onto the base.”

The man got out of the vehicle and was killed in an exchange of gunfire with security personnel, said the officials, who spoke on condition of anonymity to discuss details about an ongoing investigation.”

The gunman has now been identified, and the FBI has taken over the case.

A preliminary law enforcement investigation into the shooter has identified him as a US resident who was originally born in Syria, and likely a supporter of Salafi-jihadist ideology, according to one of the sources.”

On Thursday evening, the FBI said it is “not ruling out any possible motives” in the shooting.”

In a statement posted to Twitter the Houston office of the FBI said, “We are not ruling out any possible motives and continue to investigate all leads. When we are able to release additional information, we will do so.”

Officials have identified various social media accounts, which initial reports indicate are likely associated with the shooter, the source said. Online postings by these accounts expressed support for ISIS and Al Qaeda in the Arabian Peninsula (AQAP), the source said.”

This got very little attention. You would think a terror attack would be front-page news, if not the lead story. However, the media have a narrative right now, and they will not be dissuaded from it. The attempted terror attack got some coverage, but it was hardly the lead story. It isn’t the lead headline on any of the major news sites. Everything is coronavirus, Trump, or Biden.

Oh, wrong kind of bad guy for the narrative, apparently. If the shooter had been a white supremacist instead of a Syrian-born al-Qaeda/ISIS sympathizer, don’t you think it would have led the news cycle?

Oh, wrong kind of victim for the narrative, apparently. If the terror attack had been against a civilian target, would that have made the news? Plus the fact that the security guard was wounded, but survived, thanks to her bulletproof vest.

Oh, and likely the wrong kind of firearm for the narrative, too. While the type of weapon hasn’t been mentioned, I’m going to bet that the terrorist used a handgun and not a big bad AR-15 while trying to blow through the front gate. I could be wrong, but I’ll hazard the guess.

Are we so consumed with lockdowns, coronavirus, senile Biden, and Orange Man Bad that the media just fails to move a story forward because they don’t consider the facts important? We all know that if their narrative had been served, they would have made this a HUGE story leading every broadcast. Instead, it gets a tidy little one-to-two minute video package on the nightly evening broadcast, and a tiny mention in the morning because the FBI officially calls it a terror attack, and that’s it.

There is still a big world out there, full of bad guys who still want America destroyed. While we seem to be doing a pretty good job of self-suffocating ourselves at the moment, this would be the worst time to let our guard down against terror. The bad guys know that we’re distracted, and that should concern all of us.