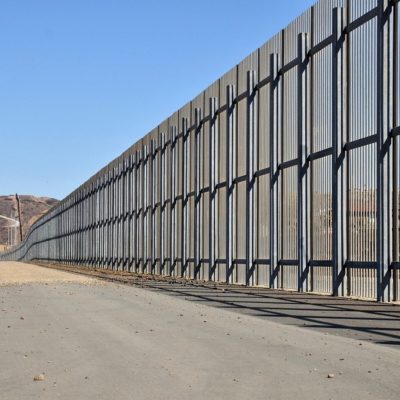 A Supreme Court vote gave President Trump a victory yesterday in his fight for a wall along the Mexican border by allowing the administration to begin using $2.5 billion in Pentagon money for the construction.

Conservative justices on the court ruled in favor of the administration. Liberal justices Elena Kagan, Ruth Bader Ginsburg and Sonia Sotomayor dissented and Justice Stephen Breyer issued a split opinion, agreeing in part with both sides.

The funds will be used to build roughly 100 miles of border wall. Cue Speaker of the House:

This evening’s Supreme Court ruling allowing @realDonaldTrump to steal military funds to spend on a wasteful, ineffective border wall rejected by Congress is deeply flawed. Our Founders designed a democracy governed by the people — not a monarchy.

Shouldn’t she be focusing on keeping The Squad in check? Oh, yes, we forgot. She’s on “recess” for 6 WEEKS! Actually, Nancy, our founders designed a republic governed by the people. And since when does having a wall make us a monarchy? Meanwhile, the rest of the left has become unhinged…

A reminder, Donald, as you gloat about a 5-4 SCOTUS decision allowing the transfer of billions of funds from the military to your twisted border wall:

YOU REPEATEDLY PROMISED MEXICO WOULD PAY FOR IT.

American taxpayers are not Mexico, you lying, racist bag of horse dung.

I can just see the arguments that will arise over the next few days. Celebrities with large garden gates and walls around their expansive compounds will talk about what a racist clod our President is. Others will continue to point at anything BUT the problem itself. Upper middle-class white kids will whine how we call free college for all “communism” while we agree with building a wall at our southern border (we’ll get called racist clods as well). The situation and stats surrounding the border crisis will be ignored.

I am extremely concerned about the growing risks to our nation’s public safety, national security, and rule of law, due to illegal and uncontrolled immigration. The crisis extends well beyond a single border — from Central America, through Mexico, to our southern border, and throughout every major metropolitan city in the United States.”-Mark Morgan, the chief of the U.S. Border Patrol, 2016-2017

In the first six months of this fiscal year, Border Patrol apprehended over 175,000 family unit aliens and over 33,000 unaccompanied children, according to this. Of 22 defendants in the Southern California MS-13 machete murders, 19 of these gang members were reported to be illegals. 19 of them! These gang members get deported and because of our weakened borders, re-enter our country with ease. Pile on top of this an increasing crisis with our homeless citizens of this country in some of our cities and increasing stress on us as a country to provide free healthcare, food and shelter for unvetted individuals who have circumvented the system while immigrants who went through the appropriate process work hard and ultimately foot the bill.

We also live in a cultural climate where ICE agents are treated with increasingly intense disrespect, making it increasingly difficult to carry out their duties. Between nut jobs attacking ICE detention centers, protestors outside of the facilities trashing the place and making the climate generally unsafe for workers and training kids to “hit the ICE officer pinata”, I’d say they’ve got their work cut out for them.

It’s a sad day when the president is cheering a decision that may allow him to steal funds from our military to pay for an ineffective and expensive wall for which he promised Mexico would foot the bill.https://t.co/CDLtwndLR3

A sad day, Chuck? Our President is not stealing the funds, first of all. SCOTUS voted to give the funds over to the project. Is the wall expensive? You bet. Will it be ineffective? Hey, anything has GOT to be better than what we are dealing with now. You know what is sad? Children willingly being abandoned by their families in their quest to hop the fence. Innocent citizens who work hard and got to this country through the proper channels living in fear of drug-dealing, violent gang members who are not supposed to be here going after their loved ones with machetes. Honestly, if a big wall keeps our citizens safe from thugs and provides enough of a deterrent to prevent Alexandria Ocasio-Cortez from opening her mouth (no more overcrowded “concentration camps”), go for it. If the wall is enough of a deterrent to prevent families who think they can swim across the Rio Grande (and can’t) with their small, innocent child, I’d say bring it on.