#SSM: The Silencing of the Opposition Begins

#SSM: The Silencing of the Opposition Begins

In his dissent from the Supreme Court legalizing same-sex marriage, Justice Samuel Alito warned of ramifications to those who remain conscientiously opposed to such unions:

Perhaps recognizing how its reasoning may be used, the majority attempts, toward the end of its opinion, to reassure those who oppose same-sex marriage that their rights of conscience will be protected. We will soon see whether this proves to be true. I assume that those who cling to old beliefs will be able to whisper their thoughts in the recesses of their homes, but if they repeat those views in public, they will risk being labeled as bigots and treated as such by governments, employers, and schools.

Today we have seen the backlash begin. Oppose gay marriage? Sit down and shut up!

It was seen this evening at the White House — the so-called “Peoples’ House” — as it was bathed in rainbow lights, sending a visual message that this is not your “house” should you believe differently. 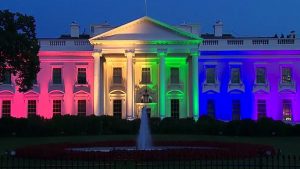 A White House official: “Tonight, the White House was lit to demonstrate our unwavering commitment to progress and equality, here in America and around the world. The pride colors reflect the diversity of the LGBT community, and tonight, these colors celebrate a new chapter in the history of American civil rights.”

At a fundraiser, Presidential candidate Hillary Clinton warned recalcitrant opponents of same-sex marriage to “Move on.” And Meghan McCain in essence told Republican opponents to — well, shove it!

Also, Republicans #LoveWins. This is the future and everyone better now finally get in line.

The responses to her arrogance were furious.

@MeghanMcCain Get in line? Haha This tone is the force behind the gay movement that will lead to religious oppression. #fail

But the most egregious example of the squelching of dissent was found at PennLive/ThePatriot-News in Harrisburg, PA, which issued this statement:

Readers at Twitter called them on their fascist anti-free speech stance.

@SusFP Have you seen unbelievable, obnoxious editorial from PennLive/Patriot-News where they're proudly going fascist? NO DISSENT ALLOWED.

@freddoso @brithume The science is settled, so shut up, they explained.

The news organization’s editorial board backed off. Somewhat:

As a result of Friday’s ruling, PennLive/The Patriot-News will very strictly limit op-Eds and letters to the editor in opposition to same-sex marriage. . . .

We will, however, for a limited time, accept letters and op-Eds on the high court’s decision and its legal merits.

Now the silencing of the opposition starts.

And the redefinition of marriage is just beginning. Coming to a state near you — is polygamy the Next Big Thing in the Left’s reworking of marriage and family? A writer at PoliticoMagazine is now urging that “It’s Time to Legalize Polygamy” — published within 24 hours of the Supreme Court ruling.

Welcome to the new world of GroupThink, America-style. Don’t argue with it. Don’t dissent. You will be made to care.