Next post
#SSM: The Silencing of the Opposition Begins 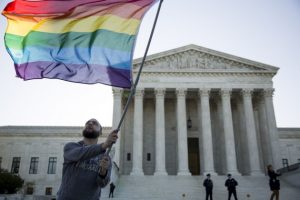 In the words of the court:

Outside the Supreme Court building, the assembled crowd of same sex marriage supporters erupted with joy.

I have a great deal of trepidation about what this ruling may eventually mean to me and to others who share a deeply held conviction that such unions should not be condoned by our respective faiths. I am not just referring to fellow Christians, but to Orthodox Jews and Muslims as well.

Ten years ago, in 2005, Marc Stern, representing the Jewish-American Congress at the Becket Fund for Religious Liberty, issued a warning:

“The legalization of same-sex marriage would represent the triumph of an egalitarian-based ethic over a faith-based one, and not just legally. The remaining question is whether champions of tolerance are prepared to tolerate proponents of a different ethical vision. I think the answer will be no.”

“Within certain defined areas, opponents of gay rights will be unaffected by an embrace of same-sex marriage. But in others, the impact will be substantial. I am not optimistic that, under current law, much can be done to ameliorate the impact on religious dissenters.”

During the arguments before the Supreme Court, the issue of whether or not clergy would be required to perform same sex ceremonies was asked by Justice Antonin Scalia. Lead counsel Mary Bonauto said that clergy would not be required to do so. However, when Chief Justice John Roberts asked counsel Donald Verrilli if a religious school which offers married housing would be required to offer such housing to same-sex married couples, Verrilli did not reply in the negative, but waffled on the answer by saying it would ‘depend’ on how each state would work out its civil rights laws. When later asked by Justice Samuel Alito if religious universities or colleges could lose their tax-exempt status if they denied such housing, Verrilli replied, “I don’t deny that, Justice Alito. It is — it is going to be an issue.”

In his dissent issued upon the ruling, Justice Clarence Thomas warned that religious people may have just lost their protections, as the Court stripped their rights to debate and to decide:

Although our Constitution provides some protection against such governmental restrictions on religious practices, the People have long elected to afford broader protections than this Court’s constitutional precedents mandate. Had the majority allowed the definition of marriage to be left to the political process—as the Constitution requires—the People could have considered the religious liberty implications of deviating from the traditional definition as part of their deliberative process. Instead, the majority’s decision short-circuits that process, with potentially ruinous consequences for religious liberty.

Justice Alito, in his dissent, echoed the fears of the religious, rendering the words of Marc Stern prophetic:

Today’s decision usurps the constitutional right of the people to decide whether to keep or alter the traditional understanding of marriage. The decision will also have other important consequences.

It will be used to vilify Americans who are unwilling to assent to the new orthodoxy (italics mine).  In the course of its opinion, the majority compares traditional marriage laws to laws that denied equal treatment for African-Americans and women. The implications of this analogy will be exploited by those who are determined to stamp out every vestige of dissent.

Stamping out those who disagree with same sex marriage is certainly on its way. Note this repugnant mockery of religious Americans published today in Britain’s The Independent:

It’s a shock to millions of Americans – the type who still aren’t over the idea Adam Lambert got all that way through American Idol and was really an actual homosexual. The sort of Americans who wake up in the middle of the night in a cold sweat remembering how the judges ruled on Roe v Wade.

You know the sort. The ones who go to WalMart with a gun and give their kids guides on what to do if there’s a shoot-out at school, because that’s their right as a citizen of Americuh. Meanwhile, they stockpile Immodium to deal with the fact that they’re still shitting themselves after hearing Ellen’s big announcement.

The hate will not be contained on the other side of the Pond. It will arise here. Christian bakers and photographers being sued for refusing to serve gay weddings will be mere playground bullying. Despite the assurances of solicitor Bonauto, eventually a church will be sued for not performing a same sex marriage. Traditional Christianity has been in the crosshairs of activist gays and the Left for decades, and they are eager to stamp out its practice in the public square. In the words of attorney blogger Erick Erickson:  “You will be made to care.”