So You Want to Stay Married Longer? Have Men Do Less Housework! (Feminists Lose Again.)

Next post
Bizarre: Billionaire Offers Millions to Any Man Who Can Convert His Lesbian Daughter

So You Want to Stay Married Longer? Have Men Do Less Housework! (Feminists Lose Again.) 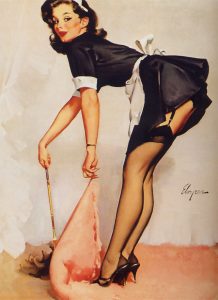 In a study likely to make feminists start shrieking about oppression, the patriarchy, and misogyny (oh my!), marriages were found to last longer and be happier when men did less housework. When men did more housework, the divorce rate increased by 50%. And in fact, the study found that the more housework a man did, the higher the rate of divorce was.

In what appears to be a slap in the face for gender equality, the report found the divorce rate among couples who shared housework equally was around 50 per cent higher than among those where the woman did most of the work.

“What we’ve seen is that sharing equal responsibility for work in the home doesn’t necessarily contribute to contentment,” said Thomas Hansen, co-author of the study entitled “Equality in the Home”.
The lack of correlation between equality at home and quality of life was surprising, the researcher said.

“One would think that break-ups would occur more often in families with less equality at home, but our statistics show the opposite,” he said.

The figures clearly show that “the more a man does in the home, the higher the divorce rate,” he went on.

When you think about it, this really isn’t that surprising. The traditional family structure — which feminists decry so often — works. Consider, for example, the fact that although women can “have it all” now (marriage, family, and a career), they’re significantly less happy than they were forty years ago… before feminazis helpfully stepped in and informed women that no, you aren’t actually happy the way you are now.

But there’s also the simple fact that people generally have a way that they like things to be done. When you’re doing something, or are used to doing something a certain way, it can be more frustrating and aggravating than helpful to have someone try to step in and do it differently. And let’s be honest, us women like things to be done our way. Most women don’t want men coming in and messing up the system we’ve got going. (Sorry, guys… but I bet you wouldn’t want us going and mowing the lawn wrong, either.) Add in the idea that housework needs to be “equal” somehow, and you’ll have resentful partners upset because they feel like they’re doing everything while the other person slacks off. And while it surely would be a petty fight, it’s easy to see how fighting constantly over housework could put strain on a marriage.

So, the moral of this story? Traditional family structures work, and feminists fail. Again.