As I have stated before, I am a mother above all else. There is a power inherent in that title, one only other mothers can fully comprehend. While every woman comes equipped with an desire to alleviate distress, with motherhood comes not only patience, understanding, and mad booboo-tending skills, but also an internal Mom signal device that alerts us to pain. It should be known that this is not limited to our own children, but extends to humanity in general. If that mom signal is triggered and the source of that pain identified, it is best that you just get out of the way. The cause will be neutralized, and the situation will be rectified expeditiously.

This theory was proven true just this week when two Islamic terrorists brutally attacked and beheaded a UK soldier Lee Rigby in the streets of Woolwich. While the soldier lie bleeding profusely in the street, mother of two Ingrid Loyau-Kennett ran to his aid, finding him already dead. And she stayed by his side, caring less for her own life than that of others as two gun and cleaver-wielding madmen terrorized the gathering crowd. She. Stayed. As it took what surely seemed like an eternity in the twenty minutes it took officials to arrive on-scene, she challenged them in the middle of the street until they were ultimately “neutralized” by a (female) officer. 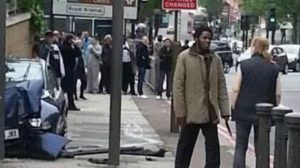 “I asked him if he did it and he said ‘Yes’, and I said ‘Why?’ and he said because he has killed Muslim people in Muslim countries, he said he was a British soldier and I said ‘Really?’. “I said ‘Right now it is only you versus many people, you are going to lose, what would you like to do?’ “And he said ‘I would like to stay and fight’.”

Yes, she told an armed madman covered in the blood of his victim that he was going to lose, able to speak to him because they refused to acknowledge anyone other than a woman. Why? Because they erroneously believed that women were “acting like men” instead of recognizing the innate female need to protect and refusal to back down.

Like Sarah Palin when her son was attacked by the media, every mother next door who’s marched into a school office to “discuss” a bully who’s targeted her baby, or a momma barn cat fighting off predators, it’s best not to threaten a mother.

You are going to lose.