Ukraine, a nation of 45 million people, which borders Europe and southwestern Russia, has been in chaos for some time now. We, at Victory Girls, began writing about the Ukraine protests back in January. Since then, we’ve blogged about them here, here, here, and here.

Why? Because he could.

And as you can imagine, shortly after Vlad took control of the Crimea Pennisula, Ukraine’s acting president, Oleksandr Turchynov, ordered the country’s armed forces to be at full readiness because of the threat of “potential aggression.”

And the Leader of the Free World?

Well, Barack Obama had already warned Vlad that “there will be costs” for any military action it takes against Ukraine. Check this out:

Officials say Obama may retaliate by canceling a trip to Russia this summer for an international summit and could also cut off trade discussions with Moscow. But it’s unclear whether those moves will have any impact on Russia’s calculus in Ukraine, which is at the center of what many see as a tug of war between East and West.

“Any violation of Ukraine’s sovereignty and territorial integrity would be deeply destabilizing,” Obama declared Friday in a statement from the White House. Such action by Russia would represent a “profound interference” in matters that must be decided by the Ukrainian people, he said.

Did you read that carefully? So, punishment for Vlad’s “profound interference” may be a canceled trip and ending trade discussions with Russia.

Since making that ridiculously amateurish and teethless statement on Friday, we’ve learned that Obama didn’t even attend his Saturday National Security Team meeting on Ukraine, preferring to be briefed later by Susan Benghazi Rice instead. I feel good about that, don’t you? He’s also re-tooled his language and approach to this whole Russian-invasion-of-Ukraine thing by simply calling Russia’s actions in the Ukraine an “uncontested arrival” and not necessarily an “invasion”.

I suspect re-naming Russia’s aggression toward Ukraine is the best Obama can do. He seems to use that tactic often as if by changing what something is called, its then not quite so horrid. Less horrid + less action = more golf. We all know that being “Tough Obama” is not very successful for him either. His “red lines” or “lines in the sand” moments have meant nothing – just ask Syria. He has virtually de-nutted our foreign policy and made us a laughingstock among our enemies. Putin is very aware of this… he invaded Ukraine because he could.

I don’t have the answers about what the United States and our allies should do about this act of aggression toward Ukraine; what with such incredibly weak and untrustworthy leadership in Barack Obama, a fledgling economy, unimaginable national debt, and a shrinking battle-weary military. Though I do NOT want to see Americans going off to war in Ukraine, the people there are fighting for freedom again, refusing to live under the boot of Soviet-era ways again. They are pleading for our help and keep in mind…there is the 1994 Budapest Memorandum, which was reconfirmed again in 2010 by then Secretary Hillary Clinton, requiring either the US or the UK defend Ukraine’s territorial integrity against any aggression.

Before Obama, we were a country that valued that deep cry for freedom. Freedom is in our DNA. President Bush was so good at letting those in far away lands know that freedom-loving Americans stood shoulder to shoulder with them in their struggle. Remember the Georgia and Russia conflict? It lifted them – helped them to stand tall against Russia.

I wish we could do that for Ukraine.

UPDATE 12:00 noon PST: This morning Russian troops in the Crimea surrounded several small Ukrainian military outposts there and demanded the Ukrainian troops disarm. Some have refused, which has led to standoffs but supposedly there have been no shots fired. Also, Ukraine’s security council has ordered all armed forces on highest alert, apparently preparing for war. Reserves have been called up.

UPDATE 3:00 pm PST: Apparently, Moscow (pictured) and Saint Petersburg residents are protesting against war today. Several hundred protesters in Moscow have been arrested. Anti-war protests also took place in the Russian cities of Minsk and Tallinn. Photos and information of the protests are being gathered through social media activists. 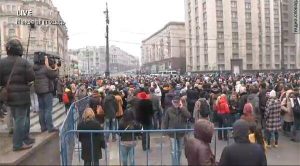 Teach at Pirate’s Cove is blogging about “Bummer: West Nile Virus Could Be Your Neighbor, Cause “Climate Change””

The Other McCain has many good blog posts up including this one by Stacy on “The New Crimean War”.

Phineas at Sister Toldjah has up this post on “Minimum Wage: West Virginia Democrats exempt themselves”.

Professor Jacobson at Legal Insurrection has up this post today on “Hillary healthy?”.

V the K at Gay Patriot has up this blog post called “Mission Impossible: Trying to Make Hillary More Human”.

Glenn Reynolds or Instapundit has many great posts at his blog hub from all over the blogosphere so go check them out! And you can read Glenn’s latest article in USA Today on “Americans rising up against government: Three examples of pushback against the ruling class”, here.

Emily at NakedDC has a blog post up called “Michelle Obama will guest on Parks & Rec”.

Yorkshire at The First Street Journal has up a great post called “Ummm, Potential Game Changer For BO – What Will He Do, or Try To Ignore”.

Jammie at Jammie Wearing Fools has up this post “Future President’s Husband Spotted With Prostitutes”. Ugh.

Jonn at This Ain’t Hell has up this post called “Another Chinese knife attack”.

Evil Blogger Lady has up several great posts today including this one “Was this whole Arizona gay religious rights thing one big unforced error for the GOP?”

Deebow at Blackfive has up this post called “The Rules For Successful Platoon Sergeants…”. Go read it in light of what’s going on with Russia and Ukraine.

Alberto at Babalu Blog has up this post “Is El Salvador the next Venezuela?”

Neo at Neo-Neocon is writing about “Danish welfare: supporting them in the style to which they’ve grown accustomed”.

and finally, Ace at AoSHQ has up this post on “Surprisingly, Obama Skips Out on Important National Security Briefing on Ukraine”. Read the comments.