Next post
Feminists Now Dictating How Your Children Should Be Educated

“Pretty creepy.” “Disturbing.” Those are the words the City Manager of Saratoga, Utah is using to describe the contents of the thick packet sent to Mayor Mia Love, a current (R) congressional candidate. 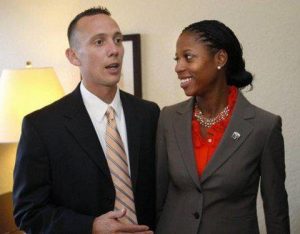 This is Jason and Mia Love. She happens to be the Mayor of Saratoga, Utah and a current Congressional (R) candidate. The packet she received at her City Hall office included a picture of Love and her husband, and a hooded Ku Klux Klan character. There also were pictures of aborted fetuses.

Apparently, the city has received other mail that targets Mia but nothing like the one that arrived Tuesday. He said he turned it over to the police department. The police are investigating and she has released a statement:

“I want you to know, I want everyone to know I am comfortable in my skin. I’m comfortable and proud of my heritage. I’m proud of who I am. I know where I’m going and I know what we need to do to get this country back in order again. There isn’t anything that anyone can send me that will distract me from that so they can bring it.”

Mia Love says she believes she’s a target for this kind of hate because she poses a problem to the policies of the Obama administration. It’s more than that. She is also disruptive to the narrative the Democrats push down the throats of Americans everyday that Republicans and Conservatives are hate women and minorities. Mia is in a heated battle with Democratic Representative Jim Matheson in Utah’s new 4th Congressional District.

The left loves power and hates people like Mia Love.