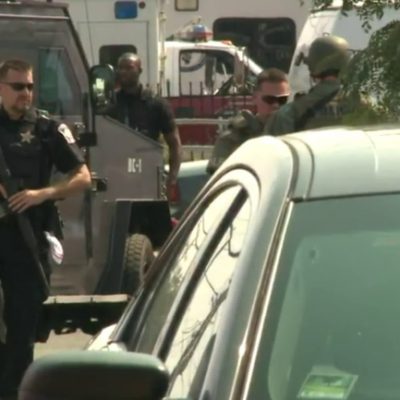 In a five-minute video compilation, Veritas showed senior members of Mrs. Clinton’s team appearing to accept a donation from a Canadian women at Mrs. Clinton’s campaign announcement rally in exchange for hats and pins bearing the candidate’s name. The staff members — Molly Barker and Erin Tibe — express awareness that they cannot accept a donation from a foreigner but agree to allow the Canadian woman to give the money to an American citizen standing next to her who made the transaction on her behalf.

The Federal Election Commission would not comment specifically on the case but noted that at least four commissioners would have to agree that there was a violation before any penalties could be imposed.

“Federal law prohibits contributions, donations, expenditures and disbursements solicited, directed, received or made directly or indirectly by or from foreign nationals in connection with any election.”

Of course, the Clinton campaign insists it’s following the law…**cough** just like Hillary did at the State Department.

Foreign donations are a sensitive subject for the Clintons, as their family foundation has been under scrutiny for accepting money from overseas while Mrs. Clinton was secretary of state, and recent State Department emails showed that former President Bill Clinton tried to get permission to give paid speeches in North Korea and the Democratic Republic of Congo.

“Our staffers understand and follow the law, as demonstrated even in their selectively edited video,” said Jesse Ferguson, a campaign spokesman. “Project Veritas, on the other hand, has been caught trying to commit fraud, falsify identities and break campaign finance law — not surprising, given that their founder has already been convicted for efforts like this.”

When asked whether the undercover journalist acted improperly by injecting herself into the undercover video, Daniel Pollack, director of communications at Project Veritas, admitted as much, but downplayed the violation:

Pollack also argued that the PVA journalist’s role was immaterial to the story. “Had she not been there,” he said, “the Canadian woman very well might have asked nicely, and they would have said, ‘sure.’ We don’t know what course this would have taken had our journalist not been there.”

O’Keefe’s attorney added this, as reported by the New York Times (aka the propaganda arm of the DNC, in my humble opinion):

While Mrs. Clinton’s campaign denied breaking any laws, Mr. O’Keefe and his lawyer, Benjamin Barr, acknowledged that Project Veritas did act illegally by facilitating such a donation but that the infraction on their part was so minor that it was akin to jaywalking.

Remind me again: What punishment did Dinesh D’Souza receive for a similarly minor campaign finance violation?