Next post
Blackwater Guards Get Christmas Pardon From Trump 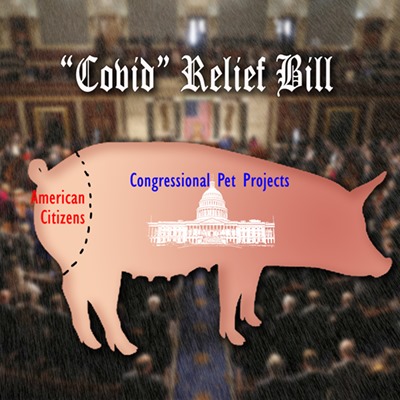 What is Congress wanting Trump signing off on?

$85.5 million for assistance to Cambodia; $134 million to Burma; $1.3 billion for Egypt and the Egyptian Military; $25 million for democracy and gender programs in Pakistan (WTF?); $505 million to Belize, Costa Rica, El Salvador, Guatemala, Honduras, Nicaragua, and Panama.

And a partridge in a pear tree. But wait, there’s more…Five golden rings…

$40 million for the Kennedy Center in Washington, D.C.; $1 billion for the Smithsonian; and an additional $154 million for the National Gallery of Art; $7 million for reef fish management; $25 million to combat Asian carp; $2.5 million to count the number of Amber Jack fish in the Gulf of Mexico, a provision to promote the breeding of fish in federal hatcheries; $3 million in poultry production technology; $2 million to research the impact of downed trees; $566 million for construction projects at the FBI.

Here we go with The Kennedy Center again. Remember that fiasco last spring? Nancy Pelosi proposed $35 million to The Kennedy Center. The venue, which has since been closed, was offered $25 million in aid with the last Coronavirus stimulus package and they still furloughed staff.

The bill also allows stimulus checks for the family members of illegal aliens, allowing them to get up to $1,800 each. This is far more than the Americans are given.”-President Trump

Granted, the list of goodies being doled out to foreign countries is part of the “omnibus federal spending bill“, some will defend. But honestly, what do sensible people do when they have limited funds? Do they spend these funds (that they do not have) on things other than the basic necessities? Do they have indiscriminate amounts of cash to go to fund other households? No, they take care of their house first, if they can. Some Americans are doing that now. Some are barely holding on. For some of us, we thankfully do not need the $600 dollar “vitamin shot”. In truth, we know we will get it and pay that back (and then some). To others, this $600 pay-out is barely half of a monthly mortgage. YOU may be on the verge of being evicted but isn’t it nice to know that the families of people who are here illegally will get more that twice as much as you?

I’m asking Congress to amend this bill and increase the ridiculously low $600 to $2,000 or $4,000 for a couple. I’m also asking Congress to immediately get rid of the wasteful and unnecessary items from this legislation and to send me a suitable bill or else the next administration will have to deliver a COVID relief package.”-President Donald Trump

As a nation, we need to be taking care of our own house. Gender programs in Pakistan? Are you kidding me? Counting fish in The Gulf of Mexico? You can’t tell me that liberals who have been counting the COVID-19 deaths and pointing their fingers at Trump all this time are actually on board with this, are they? Why, of course they are! And now that Trump has sounded off on the utter ridiculousness of all of this 5,000-page monstrosity, they’re still angry that he is saying anything at all.

“Oh, he’s rushing in at the last minute and trying to save the day so he looks good instead of Joe Biden”, they say. “Oh, he’s not going to sign and will cause more death and destruction”, they whine. As if (would-be) hard-working Americans who are currently out-of-work would get their $600 dollars sent down the chimney by freaking Santa Claus on Christmas Eve if Trump were to sign that package today? What world do these people live in? The damage has already been done, folks. People are all but trying to stay healthy so they can work and keep the home fires burning. It is utterly amazing how out-of-touch with reality the Trump-deranged still are. Here is the President calling $600 for suffering families a pittance and wanting more for them and they’re still spewing the venom! And while the Trump administration tried to mitigate the damage with relief talks, they have been stalled by Nancy Pelosi and her dirty Democrats time and time again because such proposals did not include funding for “their” pet projects. Pelosi and the Democrats agreed to the President’s demand last night but the funding for their pet projects remains in tact for now.

In truth, we are well beyond “pet projects” now. We are a nation that must save face, not to foreign countries by way of large sums of money and virtue-signaling, but to our own citizens who have been physically, emotionally, mentally and economically annihilated this year. The soul of our nation depends on this-to protect the livelihoods and the vulnerable within our borders-young and old. In reality, The President’s proposed $2,000 or $4,000 per family may not do the trick but it’s a hell of a lot better (and less insulting) than $600 bucks. And you know what’s even better than this? Independence and the ability and security to not have to depend on the government for any hand-outs. Sadly, I feel as if some of our citizens have thrown up their hands and lost sight of what that feels like completely. It’s imperative that we don’t.