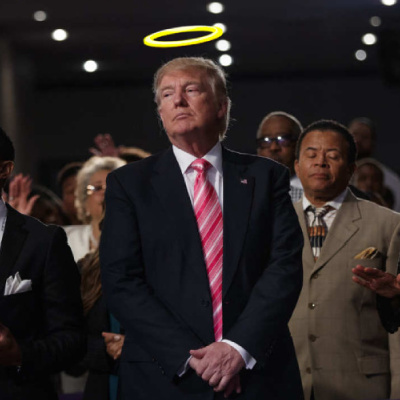 They have to distract the sheeple with a post about President Donald Trump. They being the Lefty news site Politico, in this instance. In reality, “they” are every political website, media company, podcast or Leftist burp. Joe Biden was late to the Queen’s funeral (We are not amused.) The stock market cratered and the Fed Chairman raised the interest rate by three-quarters of a point. The distraction from Politico was ‘Trump Is a Messianic Figure in the QAnon Calls’. Lord help us. The Victory Girls are rather rabid in the distate for and distrust of anything Qanon. Trump shouldn’t feed the Q’s.

Don’t yell at me. Trump should NOT feed the Q’s. Don’t give them oxygen or airtime or anything else the foaming lunatics on the Left can use. You know I am a Trump fan. Most of the time, when he says outrageous things, like he can declassify things by thinking about them, I know that he is punking the Left. They are so filled hatefilled and humorless that they never get the punk. Remember when in 2016 Trump asked Russia to find Hillary’s emails? Trump needs to stay the heck away from Q stuff. It wouldn’t surprise me if Q was an FBI operation. Read Kim’s post from two years ago here and see if you don’t smell an alphabet agency.

Politico publishes more about Qanon than anyone on the Right does. Even Creepy Joe mentions Qanon more than Trump does.

Speaking at a campaign event in Wilmington, Del., Biden said the QAnon phenomenon was humiliating for the country and condemned President Donald Trump for failing to denounce it.

The QAnon narrative involve cabals of pedophiles corrupting the federal government and combating the president. Believers see Trump as a messianic figure fighting a deep state. It is entirely fictitious and has been deemed a domestic terror threat by the FBI.

“What in God’s name are we doing? Look at how it makes us look around the world. It’s mortifying. It’s embarrassing, and it’s dangerous,” Biden said. “If the president doesn’t know better, which he has to know better, then my Lord we’re in much more trouble than I ever thought we were.”

“This can’t go on. This cannot go on. It’s the deconstruction of our democratic system.” he added.

There is that word “messianic”. First in the title of the new article and also in the article from two years ago. The new article claims that Trump is in poll trouble and needs the Q’s. From the article:

I think there might be a measure of desperation in this move, that Trump is having to align himself with people who literally believe crazy ideas. There’s pretty much nothing weirder than QAnon out there in the world, that Democrats and Hollywood celebrities are Satanic worshipping pedophiles? Regardless, this movement is now found in about 70 different countries including as far away as places like Japan. It seems to me that he is trying as hard as he can to appeal to them. I have to wonder if this isn’t related to you know, pretty bad approval ratings that he has right now, and that he thinks it’ll lift up his ranks. He can’t possibly not know that there were a ton of QAnon people during the storming of the Capitol on Jan. 6, and he knows they make up a part of his base, so I think he’s trying something out to uplift himself by these very direct calls to the QAnon universe.

I wouldn’t place anything on polls or approval ratings. I would still lie about being a Trump supporter to a pollster. Even MSNBC noticed that Biden is the one fueling Qanon now. His devil red speech from three weeks ago fired up Qanon.

The good news is that us normies don’t see Trump as a Messiah. I already have one. Don’t need another. More from the article:

First of all, we have to recognize that Trump is a messianic figure in the QAnon calls. He is the one who is going to save everyone. A lot of people thought QAnon would fall apart because Trump lost the election, and in their world, he was not supposed to lose. He was the savior, and he was going to set the world right, get rid of the pedophiles and globalists and all this stuff. It didn’t happen. But he remains that messianic figure

Yeah, no. I have a deep distrust of messianic figures like Joe Osteen or Jimmy Swaggert. Democrats are the ones who really love them some Qanon. The Left are the ones that raised Obama up to a messiah. And, Politico pointed that out in 2007 with the article: “Messianic rhetoric infuses Obama rallies’.

Maybe Politico people are the ones that NEED a Messiah. Forget about Qanon. The real Trump voters have no interest.