Previous post
America is On Fire: Is ANTIFA to Blame?

Next post
Rolling Stone: Trump Is The "No Lives Matter" President 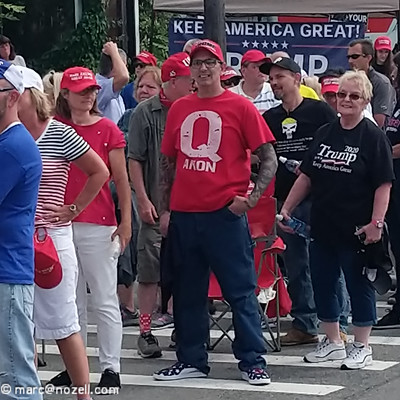 Vice President Mike Pence was to attend a fundraiser for President Trump in Bozeman, MT, but on Saturday dropped the plans. Perhaps he thought attendance would not be a good look for the campaign, especially since the hosts subscribe to the QAnon conspiracy theory.

Officially the Trump re-election campaign gave no indication that QAnon scared off the Veep. It merely told the Associated Press that Pence’s schedule had changed. But the cancellation came days after the AP also reported that the Bozeman fundraiser hosts, Caryn and Michael Borland, have shared QAnon memes and retweeted its posts. Michael Borland, for example, has featured the “Q” logo on his Facebook page, while wife Caryn has retweeted QAnon Twitter accounts.

Perhaps you’re just as puzzled about this conspiracy theory as me. But like so many other tall tales, it came from the bowels of the internet — on 4chan, to be exact. In 2017 an anonymous poster called “Q Clearance Patriot” predicted that President Trump would unmask a globalist cabal in an event called “The Storm.” And how does Q know this? He claims to be an intelligence officer of high rank with access to Super Secret Squirrel information.

According to Q, the cabal includes Satan-worshipping pedophiles who run a global child sex-trafficking ring and who also are plotting against Trump — in their spare time, one presumes. This group includes Hillary Clinton, Barack Obama, Oprah Winfrey, Tom Hanks, and, of course, George Soros. Even Pope Francis and the Dalai Lama are part of the clique. If that’s not enough, Q claims that the group participates in cannibalism, too. “Outlandish” doesn’t begin to describe this.

How many people adhere to QAnon? No one seems to know, since it’s an internet phenomenon. Unfortunately these groups also detract from the problem of real child sex trafficking. Plus, groups that fight against child sex rings also have to deal with QAnon misinformation from people who contact them.

But if you ask the media, QAnon followers are everywhere. And they will destroy the country.

For example, Ali Velshi at MSNBC reported that QAnon has infiltrated the White House! And the Republicans won’t do a thing about it. Plus, if you know any Trump supporters you most likely know some QAnon kooks, he insists.

Speaking for myself, I know a lot of Republicans, both in person and online. But I have yet to find anyone who promotes QAnon. Yes, I know that’s anecdotal, and your results, as they say, may vary. But as for the charge that the GOP is ignoring the conspiracy theory — that’s inaccurate. Rep. Adam Kinzinger has called upon the Republican Party to condemn it. Sen. Ben Sasse also called it “nuts,” Rep. Liz Cheney labeled it a “dangerous lunacy,” and House Minority Leader Kevin McCarthy said there is “no place” in the GOP “for QAnon.” Finally, Sen. Lindsey Graham called it “batshit crazy.”

As for VP Mike Pence — he also described QAnon as a conspiracy theory, telling CBS:

“I don’t know anything about QAnon, and I dismiss it out of hand.”

The media also want you to know that the FBI calls QAnon a “potential domestic terrorist threat,” according to PolitiFact. (Notice the word “potential.”) PolitiFact also cites “multiple instances where QAnon beliefs were connected to real-world crime.” It listed such incidents as drivers who led police on high-speed car chases, a man who blocked traffic with his vehicle, and a woman who drove onto a pier in New York City with a car full of knives. There was also the Seattle man who killed his brother with a sword, and a New York man who killed a member of the Gambino crime family. All these people supported QAnon, but correlation is not necessarily causation.

Now just imagine if all those perpetrators were Muslim terrorists — the media would be telling you they’re merely “lone wolves.” Nothing to worry about.

I also find it interesting that while the media want to pin QAnon on Republicans, calling it a “domestic terrorist threat,” they gloss over the elephant in their own room: the extreme violence on the Left.

Like the BLM and Antifa rioters who have terrorized and destroyed parts of cities, like Portland. Rioters have been tearing that city up for over 100 days now.

I hope that those who made excuses for BLM-antifa’s 100+ days of arson attacks now understand how much devastation fires can do. There’s a reason police used force to stop the arsonists. Fires spread. pic.twitter.com/kVkci76NYg

Or the gunman in Los Angeles who sauntered up to a parked police car on Saturday night and opened fire. I’d be willing to bet that the gunman doesn’t adhere to QAnon.

Update: The gunman walked up on the deputies and opened fire without warning or provocation. pic.twitter.com/cBQjyKkoxJ

What did Jesus say in Matthew: You hypocrite, first take the log out of your own eye, and then you will see clearly to take the speck out of your brother’s eye. The liberals in the media are hypocrites of the first order.

Vice President Mike Pence made the right move in cancelling his appearance at that Montana fundraiser. He should not be associating himself or the Trump campaign with a fringe conspiracy theory, which I also find to be nuttier than squirrel poop. Now, if only President Trump and members of his campaign would stop flirting with QAnon followers on Twitter, perhaps this nonsense would end.