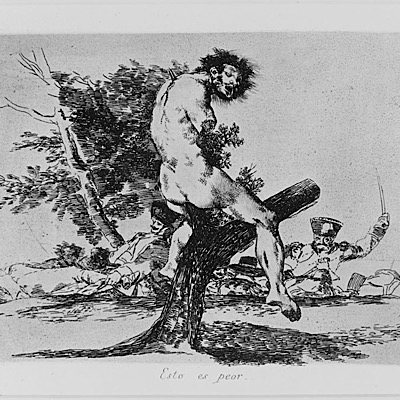 Our featured photo is from Goya’s The Disasters of War—titled—Esto es peor—“This Is Worse”.

Everything that lead up to it.

The series details Napoleon’s catastrophic Peninsular War, where the local peasantry shredded the French from guzzle to zatch.

Americans are about to begin a similar war, where the local guerillas, formerly the Deplorables will throw a cordon sanitaire about the Blue City Sewers. In effect, ceding these cities to the elite, who can neither run them, nor live in them, nor support them.

If Trump loses in November, the National Socialist Left will come for your guns. By January 20th, inauguration day, laws awaiting signature will be in place for seizure, confiscation, and mandatory prohibitive insurance mandated at the federal level. Nancy Pelosi will keep the house in session through the holidays, from November 4th onwards, and the majority leader in the Senate, Mumbles McConnell will have left for Kentucky for a well–deserved retirement, unable to stem the socialist assault.

With Chuck Schumer back in charge, bills of attainment will spew out of congress as from a broken hydrant. Whether they can actually seize the weapons will be a thousand skirmishes with various degrees of success, by town, by state, by county.

But will the riots recede?

The Deep State tried an intelligence coup (among other ploys) but now Paladin suspects the mob will go for electors—to change votes—because the mobs can actually go to the electors’ homes. Local BLM or Antifa thugs appearing house by house at 3AM, and in places where no cops will come to protect them.

We have entered a time of reprisals, retribution, and vengeance. The first sacrifice may be Thanksgiving, where we are urged to forgo the celebration.  Either because Trump. Or in the event the Progs triumph because Racism. Call this The Guns of November. A racist holiday cancelled under un cri du Coeur.

For decades, the anointed Influencers have been demonizing the privileged Puritanical Mayflower white whiteys who stole the pristine wilderness from its noble native population. And for those who still observe the horrid holiday, the Trump voters will be subjected to the Critical Race Theory kiddies table.

Did you see the crowds in Philly chanting “Death to America”? – sure, they’ll eat some turkey and mash on November 26th, but they won’t give thanks or revere the magnificent country they inherited. They’ll hammer the local restaurant patrons even harder, making dining out impossible for paying customers in Pittsburg and elsewhere.

And in Rochester the thugs are very clear about it, “If you don’t give us our shit, we shut this down!” What this really has to do with police employing a spitting hood over a drugged out, butt–naked crazed guy back in March is anyone’s guess. Here’s a tip for you, Wokes in Rochester.  Don’t get so high you run out into a snowy street to spit on cops claiming you have the ‘Rona. Stay inside and watch Oprah reruns until it the feeling passes.

Here in Upstate New York we have demonstrators doing spit-bag nudie chic. Insane Libs who are calling for a New York-wide policy to stop police responding to mental health calls. Rochester, you want Crazy Town?  You’re about to get it.

And just hope your stinking burg, can hijack its share of critical supplies and “trucker stuff” as they roll on by. Because the tractor-trailers aren’t going to deliver voluntarily any more. They’re gonna bypass your chaotic city.

Teamsters may try to run checkpoints or commandeer trucks for delivery, but that will be more like an organized crime, protection, “letters of transit” racket. Every Crazy Town is going to need supplies, so expect a raging black market, where a truckload of disposable diapers will go for 10 times its value in a stricken metropolis. The Chicago/Illinois lakefront will once again be the gateway to for critical goods from Canada.  The City by the Bay will import from Red China or Taiwan, while there’ll be a battle for Long Beach to see which Los Angeles gang controls the docks—Hollywood, or Sacramento.

But we own Trucking. In trucking, only about 2 percent of all 3.5 million truck drivers are unionized.   Think of those other 98% as Tractor Trailor Deplorables. Who go where they please and haul what they please.

We have the guns, the trucks and food – they have everything else. Except the people.

Featured photo is from Francisco Goya’s “The Disasters of War.” 1863. Public Domain.