Next post
Russia Has Two Americans In Prison, But Why? 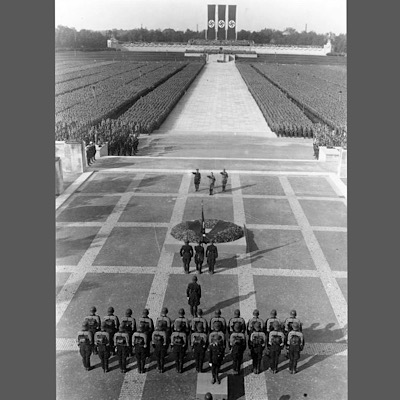 Our featured photo is from the National Socialist Nuremberg Rally of 1934.  Paladin would post pictures of the National Socialist rallies and riots here in the United States but at VGirls we wisely post only free or public domain images. Moreover, Wiki Commons simply doesn’t seem to run any public domain photos of American rioters.  Specifically, those match-happy mostly peaceful rally attendees who from time to time burn down cities with the express permission, advocacy and backing of our coastal rulers in DC and elsewhere. On Wiki at least, those storm troopers of modern fascism do not exist.

But VGirl readers know they do exist.  Even if Wiki or the Wormtongue media awards them political and social cover. And despite their minuscule numbers the American National Socialist movement of BLM, Antifa and their sympathizers are growing more powerful by the hour. It’s a Numbers Game from now on. And here are the numbers:

That’s 6 justices on the Supreme Court who need no extra beatings to remove themselves from easy decisions fraught with terrifying consequences. Already, these 6 paragons of courage who might have chosen to stand against obvious rampant election fraud, or tyrannical coercion under ObamaCare hide under their robes. Alito, Thomas – alas, the time for gentlemanly forbearance and silence is over. Will you stop HR1? If mobs appear at Mommy Amy’s house, if Boy Bret can’t go out to eat at Chez Derrière in Georgetown without being harassed, will any of you face down violence? Or the veiled threat of violence or even harsh language?  To ask the question is to answer it.

That’s 12 members of any American Jury. The Chauvin intimidation process will become standard. Mobs scream. Local and National Politicians tell the jury how to vote. Outcome guaranteed. And they’ll do it at every appeal too.

That’s 27 Redstate Governors. These may stand for a while, but how long before DeSantis is “discovered” with kiddie porn and his name appears on the manifest of Epstein’s Lolita Express? Charges disproved in 20 minutes but live for the next 20 years. South Dakota’s Kristi Noem didn’t need any help betraying her people, instead she willingly passed around lib turd canapes over the honestly scientific closed question of Y Chromosomes defining X Chromosome Sports, while telling us this shitz on a ritz was caviar. And Kristi didn’t even have to leave the state capital – Pierre – to go over to the biology deniers.  Babe, you’re never getting out of Lucky Pierre now.

That’s 50 Senators – how hard is it really to bribe or threaten fifty talking jelly fish? How many do you really need to guarantee outcomes?  Not even fifty, not even ten. And after decades ensconced in their exquisite marble mausoleum they’ve already been bought, paid for, and forking over loan shark vig every time they leave the cloakroom.

That’s 212 House Reps.  Sure, there’ll be a mess of holdouts – after all, some of those student government electees actually have to face their voters if they ever want to go home for Thanksgiving Dinner.  But it won’t take all 212. If the House changes hands in 2022, you’ll only need to turn a handful.  Think a chorus of Wormtongues poisoning the well water in a couple of obscure Podunk House districts you’ve never heard of, and the local papers either ignoring or applauding. Think more districts office trashing, more home invasions, think threatening protests by local storm troopers at the car dealership where U.S. House Rep Pudknocker buys his car. Or the local hairdresser who tints his silvery-blue haired mother.

You can feel it in the air.  No accident two black women want to inflict pain on innocent strangers because they’re white. No accident the local paper in the Chauvin trial threatens to publish names and addresses of jurors. No accident we still don’t know which government employee murdered Ashley Babbitt.