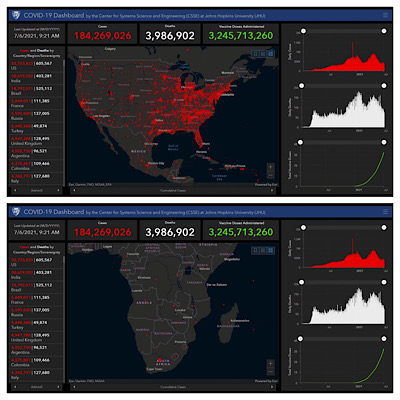 Orwell famously remarked, “. . . the avoidance of reality is much the same everywhere and has much the same consequences. (sic) To see what is in front of one’s nose needs a constant struggle.”

Back when Rush ruled the airwaves, he did a short bit on Covid deaths in Uganda. Apparently, at the time of his broadcast there were only 13 deaths in the whole country of Uganda. That was about a year ago.

In a nation of 45 million people, Uganda – you read that right, 45 MILLION — 13 deaths. Hmmmmmm, how could that be?  Well, the answer is simple, Uganda is a hotspot for malaria and the population there, takes hydroxychloroquine as a therapeutic preventative. And has for 40 years. As do other vast regions of sub-Saharan Africa.

The whole nation of Uganda is basically immune to the WooeyFlu. They can be dirt poor, malnourished, living in squalid African huts – but dang it, they didn’t get Covid.

Here, of course, after DJT backed HCQ as a possible preventative the whole machinery of goose-stepping correct thinkers and influencers destroyed any possibility of using HCQ and Ivermectin in the USA. Unless, of course, you were one of the elite and demanded it. Regular American “Ugandans” – no luck. Suffer, peons. Your peasantry gives you no rights.

Even today a cursory google/bing search on HCQ and Ivermectin denigrates the effects of these two drugs as preventatives. You have to go to the psalm singers over at thenoqreport to get an opposing view. Try posting that NOQ link on FB or Instagram. It’s from 2020.  If it isn’t banned, let Paladin know.

Now take a good look at the Covid Map above.  The virus is wall-to-wall here in populated North America.  In Africa? Not so much. Check out the current cases of COVID-19 from the famous Johns Hopkins map – especially in Uganda:

Last Paladin checked using White Privilege Mathematics —0.000 anything, was A LOT SMALLER than 0.00 something else. Uganda’s got Covid crushed.  The CDC, the NIH, the Federal, State & Local governments, yes, we’re talking YOU – Gubbiner Grabby Granny Killer Cuomo – you blew it. You lied and people died.

It’s right in front of your nose. Because of HCQ Africa did the ‘Rona better than us.  Unless you want to buy into the idea that sub-Saharan Africans are so much healthier than regular Americans – even with rampant tropical diseases like – Schistosomiasis, Trypanosomiasis, Onchocerciasis, Trachoma, Leishmaniasis (whatever the heck they are) — just to name a few. Africans suffer those viruses on a daily basis. Maybe Africans’ higher survival rate, is due to sub-Saharan Africans’ low fat diet.

Still, they beat the ‘Rona. They got that licked.

So naturally, they’re rejecting the vaccines.

Because they’re not getting sick from the ‘Rona.

Like a lot of Americans who simply don’t trust the influencers and who are now going to be tracked down in their places of work, home, and recreation in order to submit to the jab.  It was Moderna for Paladin, but he’s over 65. If he were a little younger, fuggedaboutit.

Paladin saw a sad thing in the market the other day. Right in front of his nose. A youngish mother (late-30s) brought her four year old with her, both mom and son masked to the hilt.

The fashionable birthing-person wore the super duper mask and the child wore a fun little child-size mask with an animal imprint. The poor thing looked bewildered and faint. As though breathing through his extra Dependz face diaper took more energy than usual.  The damn thing was half on his tiny face, half off, totally useless.  And Mom — busy at the meat case, had abandoned fixing her birthed-person’s face diaper back on aisle two. But you could tell she cared. It was important to mask up. Important to show she wasn’t a Trump White Supremacist. By masking up, she and by extension her little mouth–breather —proved their virtue.

Hey kid, Paladin has a suggestion. Leave your parents and go to Africa where you can breathe free. Kids don’t get sick from the ‘Rona there.  Nor do kids get sick here, only crazy parents who don’t want to be mistaken for Trump voters, or white supremacists.

The uselessness of the mask is right in front of your nose.

Author’s note: Paladin is taking a short break to move his saintly 90 year old mother closer to him and will return to VGirls before the snow flies when Ma Joad Paladin is unpacked from the jalopy.

Featured photo is the COVID-19 Map from Johns Hopkins Coronavirus Resource Center and can be found here.