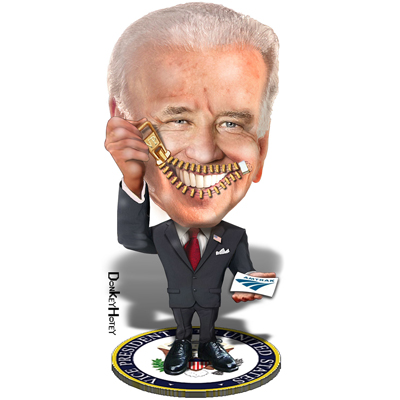 Joe Biden held his second town hall in Cincinnati, OH, on Wednesday night. CNN sponsored the event, and Don Lemon hosted it, but despite these advantages, Biden was once again the disaster we all were afraid he would be.

First of all, the crowd size at the town hall was. . . underwhelming.

What the Biden CNN town hall looks like from the back of the auditorium: pic.twitter.com/juUehd7PDu

Despite the paltry attendance, Biden took questions from the Ohio attendees.

The pandemic, of course, figured prominently into the evening. Someone asked a question about kids under 12 getting Covid vaccines, and Biden answered her. Oh, lordy, his answer! His mental freight train, chugging down its cognitive tracks, jumped track and took a dirt road:

“And the question is whether or not we should be in a position where are why can’t the the the experts say we know that this virus is in fact it’s going to be or excuse we we we know why the all the drugs approved are not temporarily approved and but permanently approved, that’s underway too, I expect that to occur quickly.”

Don Lemon jumped in to save the president by reminding him of the FDA.

But it’s even worse when you watch the video:

That was truly uncomfortable. And just think — we may have over three more years of this argle-bargle.

Nor was that the only blunder that Biden made at the Cincinnati town hall. He also said that if you have had the Covid vaccines, you’re not going to get the virus:

“The various shots that people are getting now cover that. You’re okay. You’re not gonna get COVID if you have these vaccinations.”

Did Biden forget about the six fully-vaccinated (allegedly) Texas Democrats who have tested positive for Covid? Frankly, I think they were lying about the fully vaccinated thing, but has Biden not heard about breakthrough cases? Or of Nancy Pelosi’s vaccinated aide who just turned up positive?

A spokesman for Pelosi’s office provided this statement:

“Yesterday, a fully vaccinated senior spokesperson in the speaker’s press office tested positive for COVID after contact with members of the Texas state legislature last week.”

And yet Biden is the leader who is supposed to bring the nation through the pandemic. Great, he’s clueless.

Biden also showed that he doesn’t know how businesses actually work. But why should he? He’s never run anything in his life. Watch how he told a restaurant owner at the town hall that his business is going to have problems for a while. But don’t worry — as long as he starts paying his employees 15 bucks per hour, his business will be humming along.

Joe Biden tells a small business owner that his industry is "really going to be in a bind for a little while," and goes on to say that if he wants to hire workers, he'll just have to pay a $15/hr minimum wage: pic.twitter.com/d2uoDsLaVo

Joe Biden also returned to his obsession with Jim Crow laws, even though his analogy of questioning Georgia votes in the 2020 election with Jim Crow made no sense at all. But he’s fixated on it. It’s a go-to position when he can’t think of anything insightful to say.

BIDEN: Attacks on democracy are "Jim Crow on steroids." pic.twitter.com/Mew1TRfd1h

And yes, he still wants to take your guns. But not just the dreaded AR-15: Biden told the town hall — in his own mangled way — that he wants to ban hand guns, too. He also wants to go after gun shops that don’t do background checks, even though criminals usually steal their weapons or buy them off the street..

They're not hiding their intentions. Joe Biden says he wants to ban handguns — not merely AR-15s like their previous dishonest talking points suggested. Watch Biden stumble through this town hall answer. pic.twitter.com/DI3CDTN1wL

And as for foreign policy — well, he thinks he’s got the world by the balls:

“Those of you who travel abroad, it’s not a joke. Not a joke. Ask — you know, when I went to this G7, all the major democracies. I walked in and go, ‘America’s back.’ I’m serious, heads of state. I give you my word as a Biden. They said, ‘Are you really back?’”

“I give you my word as a Biden” said the guy who was in cahoots with his drug-addled son Hunter doing business deals in Ukraine and China. And as for the G7 leaders who were in awe that Biden brought “America back” — let’s just say that Xi Jinping and Vladimir Putin would be snickering.

Naturally there were other verbal slip-ups during the course of the town hall. Like these, for instance:

“I don’t care if you think I’m Satan reincarnated, you can’t look at the television and say nothing happened on the 6th.”

Yeah, well, nobody is saying that. Of course there was a riot at the Capitol on January 6. But referring to himself as Old Scratch before those at the town hall was truly bizarre.

And the next three years may be bizarre, too, thanks to radical Democrats who are taking advantage of Biden’s progressive dementia — yes, I said it! — in order to foist a Marxist agenda onto the nation. They knew exactly what they were doing when they chose this man as their standard-bearer. Shame on them for hating our former president more than they love our nation.

Equal — if not even more — shame is due Jill Biden. After all, she knows that Joe’s cognitive skills are rapidly declining. And trust me — as a speech pathologist who watched Alzheimer’s devastate my mother — I recognize the jumbled language patterns. I see the repeating of words and the verbal disfluencies. And don’t tell me that this is just Biden’s old stuttering problem, as his apologists insist — his speech was perfectly fluent during his years in the Senate. The current stuttering probably results from declining language abilities.

And this won’t get better, either, it will only get worse. Jill Biden has known this, I’m sure, but so wanted to be First Lady that she was willing to sacrifice her husband’s dignity to satisfy her vanity. In a competition between Jill Biden or Hillary Clinton as to which is the more disgusting garbage human, it’d be a toss-up.

But we can take solace in this one fact: at least there are no more mean tweets.