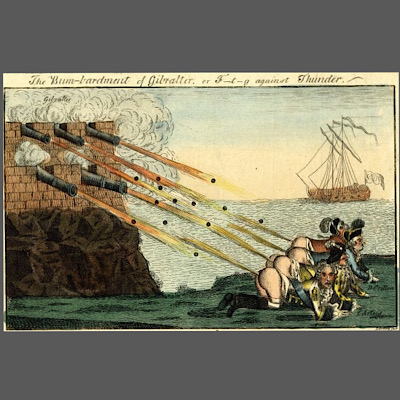 The cartoon used as our featured photo lampoons the French and Spanish’ futile efforts to dislodge the British at the Siege of Gibraltar. The Brits are the ones on the Rock, blasting the douchey continentals’ exposed derrières. To quote Wiki, (the siege) “involved huge numbers—60,000 men, 49 ships of the line and ten specially designed, newly invented floating batteries—against the 5,000 defenders.” The French and Spanish soon found the Trocadéro ball room in their clam diggers severely constricted and sued for peace.

In this cartoon of history, the bare-assed French and Spaniards look a lot like our fecal–eating mass–media tech SS as they assault the Gibraltar of our American body and soul. Actor and luminary Dave Bautista calls us: “Small Crowds of Idiots.” Note to Marvel Studios, and Walt Disney Studios the larger half of this country you continue to insult and demean will not be going to a Bautista film any time soon.

Worth noting that the SS stands for Schutzstaffel—literally ‘Protection Squadron.” How much of life has been restricted and marked Verboten for our protection? What we can eat, what we can do, what we can say, what we can think.

Others document this SS forced protection and compliance better than Paladin ever will. But what’s clear now is our constantly evolving Progressives have become a united front. An American Gestapo —Geheime Staatspolizei (Secret State Police)—under the aegis of a rogue FBI and other rogue government agencies—an American SS under the banner of the media/big business/Academia/democrat party and a dearly hoped–for, nascent Red Chinese Social Credit System , via Facebook, Twitter and Google. A system of coercion where good think algorithms will determine who’s naughty, who is nice, who gets to earn a living and who gets to go to a Uyghur Reeducation Concentration camp of the politically incorrect.  Make no mistake that’s the Progressive SS plan for our future. Shape up or ship out to a barbed wire, Ludovico Technique Attitude Adjustment Center.

We’re well on our way.

As has been pointed out before, Trump is just the symbol, we’re the real target. And we have been for a long time.  No need to explain who “we” are – we know who we are.  We’re the people who don’t plant the “Hate Has No Home Here” signs in our front yards. We are the ones without the virtue signaling Equal Signage in our car windows or places of business.  These little signs signal the desire for party protection from the mob like a BLM sign.  They signal the desire for party protection from the modern American Schutzstaffel and modern American Gestapo.

You can bet your life there’s a hater behind every one of those Hate Has No Home Here yard signs, a soy-boy–grrrl, cuck-bully, hiding in his parents’ basement in piddled purple–haired twuntery, who hasn’t washed his/her unisex black sweatpants and hoodie since the last BLM white wimp rally. And he/she/fukwadpronoun thinks his parents aren’t woke enough. In a way he’s right.  But now he/she/fukwadpronoun can’t figure out what to do next.

The riots are petering out.

No, Paladin takes that back—Cuck-bully will just spit in the fries. See . . . those empty avatars of Americans are no more effective—yet—yet . . . then the Frenchies and their Spaniard lackeys.

We don’t hang the rainbow flag on the rock of Gibraltar. We hang the American flag if we hang a flag at all. It’s the patriots’ in-your-face secret handshake. And we’re far from beaten.

Just waiting for November 3rd to fire our ballot cannon all at once. And then later, those same souls will celebrate the greatest holiday of all time—Thanksgiving—to eat big bird with some stuffing, cranberry sauce, mashed mush and punkin’ pie. And whatever else our dearly fought for Freedom allows.

Unless, of course the SS cancels T-Day altogether as per orders of Dr. Quacki.   Then we’ll have our Thanksgiving from the tin of a TV dinner.  And that’s okay too.

Featured photo, is called “Bum-bardment of Gibraltar” – A British cartoonist mocks the unsuccessful attempts by the French and Spanish to take Gibraltar. (Thomas Colley, 1782, British Museum).