Next post
How To Pay For Stimulus? Raise Federal Tax Rates! 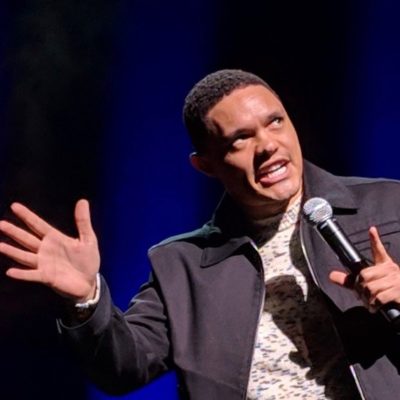 The Daily Show’s Trevor Noah, took to the stage at the 67th Annual Grammy Awards last night with his uniquely unhumorous sense of humor. Remember the time Trevor Noah compared America to the Third Reich? Hysterical.

Equally as chucklesome was Noah’s opening monologue where he joked about The Royal Family, cocaine and the Capitol riots. So much for staying away from politics and “letting the music bring us all together” as he stated previously.

Rest assured, everyone here is following all Covid-19 protocols and guidelines. In fact, this is going to be the rare awards show where the white stuff going up people’s noses is cotton swabs. Pretty safe.”-Trevor Noah

But it’s going to be even more exciting because our nominees will be sitting at those tables for their awards, so right now there’s more tension in that tent than at a family reunion at Buckingham Palace.”-Trevor Noah

….tonight is going to be the biggest outdoor event this year besides the storming of the Capitol”-Trevor Noah

Really, Trevor? We thought the biggest outdoor events took place in The Summer of Riots of 2020. But, alas, no mention of those super-spreader events. Noah thought this was so edgy, he actually tweeted out the quote.

That joke actually made me sad. Not cool. It was a tragedy, Noah. People died. Families are suffering. Many have PTSD.

Imagine this-a white comedian joking about a riot that killed a bunch of black people on national television? Imagine the outrage. Trevor Noah, who is not even an American-born citizen, jests about a riot that killed people in a sick attempt at humor. Say their names, Trevor. Capitol police officer Brian Sicknick, Air Force veteran, Ashli Babbitt, Kevin Greeson, Rosanne Boyland, Benjamin Philips. Oh, right. Some of them were Trump supporters. So, in the eyes of Trevor Noah and I would be willing to bet some of the attendees at the 63rd Annual Grammy Awards, they deserved to die and leave behind their loved ones?

Trevor Noah also neglects to mention the “parties” in the streets after the news broke on all media outlets that Joe Biden would be our next President. Remember those? Or should we also revisit the teacher protests? You know, the ones where they could be around hundreds of their peers but cannot be in a classroom with 20 Kindergarteners? Yeah, no, he didn’t go there. Noah chose the Capitol riots as his humor’s focal point.

The biggest outdoor event this year since the capitol riots, Noah says. Probably a great deal safer for all performers involved, I’d say. Tell me again how much security detail is on Beyoncé and Megan Thee Stallion? And let me guess, the artists won’t have to walk through the homeless-ridden streets of Los Angeles (where they may catch COVID) that were all but destroyed in the summer riots. They’ll go home in their limos with their loot in their swag bags donated by merchants tripping all over themselves for a mere Instagram mention.

Hopefully this can be a respite from that for a moment and then we’ll be like, ‘Oh yeah, that was the beginning of when we got to start living our lives again.’”-Trevor Noah

Newsflash, Trevor: life has not stopped for most of us. Your friendly cashiers at the Whole Foods you frequent? They’ve been working every day since the beginning of all of this. And for some of us, Trevor, we’ve had to pick up the pace a bit by working our jobs and home-schooling our kids. And this frustration came to a head after one year that “seemed like 10” when some of us came down with the dreaded ‘Rona! So, if you don’t mind, go have yourself a cup of shut the f#ck up.

Trevor Noah also joked about the empty red carpet. Judging from Noah Cyrus’ dress, we did not miss much. Noah also joked about guests actually being able to see performers and not have to glance around “teenagers stacked on top of one another” He claimed he wanted the evening to be about “hope of what 2021 can be. “Full of joy, new beginnings and coming together — never forgetting what happened in 2020, but full of hope for what is to come.”

Because, after all, Joe and Kamala are in charge now…so we can be nothing but…hopeful? Dear God! How do we come together in Trevor Noah’s delusional world? By throwing in the same divisive, political rhetoric that we have heard all year and passing it off as a joke? Want to bring hope in to 2021? Get people back to work. Take off the masks. Put kids back in the classroom where they belong. Quit giving people like Trevor Noah a platform to virtue-signal under the guise of humor. Create music. I mean, actually create it. Perhaps our “song of the year” won’t be about someone’s lady bits. Oh, wait–that was 2020. No wonder why we were doomed. But Billie Eilish did stump for Biden while looking like she wanted nothing more than a bag of Doritos to cure her munchies, so there’s that.

In all seriousness, “Cuomosexual” Trevor Noah’s jocularity regarding the January Capitol riot was classless at best. It just was not funny. Want hope in 2021? Keep Trevor Noah on late nights and bring on some real comedic talent. The last thing we need in 2021 is another smug, liberal comedian.