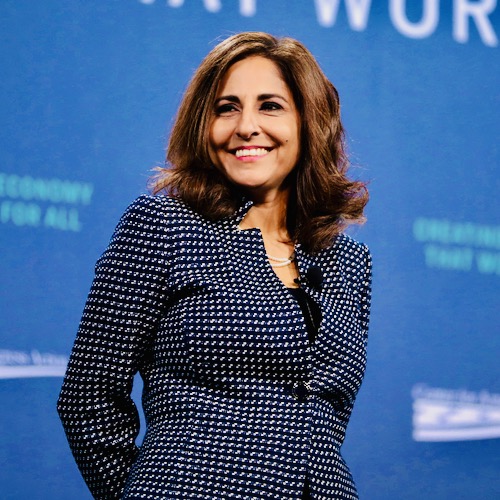 Neera Tanden likely will not be OMB Director. The Senate Homeland Security and Government Affairs Committee canceled today’s vote and have not rescheduled.

“White House Press Secretary Jen Psaki has reiterated support for Neera Tanden, the nominee for director of the Office of Management and Budget, after a Senate Homeland Security Committee confirmation hearing was canceled.

Axios reported that the Senate Homeland Security Committee has postponed a confirmation hearing that was scheduled to be held on Wednesday.

In a statement issued on Twitter following the news, Psaki said: “Neera Tanden is a leading policy expert who brings critical qualifications to the table during this time of unprecedented crisis.”

What qualifications?? Evidently her BEST qualification according to Jen Psaki’s brilliance is that she will be the first South Asian women to lead the OMB. In other words, diversity so just confirm her already!

The problem is, she’s a problem. Several Senators, notably Joe Manchin (D-VA), Susan Collins (R-ME), and Mitt Romney (R-UT) aren’t fans of hers and won’t vote to confirm her. Which threw a huge spike in the confirmation process.

Hugh Hewitt thinks she should be confirmed and that everyone needs to quit making this all about her mean tweets. You see, according to him, higher standards of conduct only apply to the judiciary, not to government officials who run key bureaucracies of the United States government.

“Tanden, head of the liberal Center for American Progress, is a lawyer, activist, former senior Hillary Clinton aide and ubiquitous presence on cable television and Twitter. Because Tanden is smart, funny and quick, she’s capable of leaving a mark. I know — I have more Tanden-inflicted scars than the villains in all the Zorro movies and television episodes combined. She has displayed the same cutting ruthlessness on Twitter as she has on set. Which is to be expected. She’s a serious left-liberal, though not as far to the left as Sen. Bernie Sanders of Vermont, so she’s left some marks on Team Sanders as well. She should also be confirmed as OMB director.”

As Hewitt notes later on, the bar on objections to confirmations should be reset to include only SERIOUS credible objections to a nomination.

Well, Hugh… you can make it all about her mean tweets, but that’s not the problem. Nor is it a problem of racism or sexism like other Democrats are painting the issue.

Again, it’s the toxicity she brings to her work environments.

The claim that opposition to her is just about "mean tweets" is blatantly preposterous. She has long been one of the most slanderous, vicious and deceitful partisan operatives in DC. She censored her own writers when funders demanded it. She's toxic, unhinged, and incompetent.

Furthermore, as Glenn Greenwald’s reporting uncovered, it is the censorship she and John Podesta engaged in while running The Center for American Progress. Greenwald’s concerns about Israel and Palestine not withstanding, it’s the fact that Neera was all too willing to engage in censoring her own staff because AIPAC demanded it happen. She caved to AIPAC then. Who is to say that she wouldn’t do the same as OMB director?? And THAT is a valid objection to Neera Tanden’s nomination.

Furthermore, this is also problematic.

The most staggering part of the Neera debacle is she was probably the most prominent Dem to spread the Big Lie about 2016: that Hillary really won, but Russian hackers invaded voting systems & changed her votes to Trump. 2/3 of Dems believed that in 2018.https://t.co/MAy2VTpguX

Dems are simultaneously demanding that all Republicans who ever endorsed or even got close to 2020 electoral fraud theories be blacklisted from TV.

At the same time, they're demanding a Dem who endorsed a batshit conspiracy theory about the 2016 election be confirmed to OMB. pic.twitter.com/BJkhZPQupc

Remember how quickly Hillary came out and blamed Russia for her loss? Where did that come from? Neera Tanden, John Podesta and others. Which lead to YEARS of the media yelling at the sky about Russia Trump collusion!

And this is who Biden wanted for OMB director??!

It isn’t her mean tweets, some of which were pretty damned bad. No, it’s her politics, her willingness to engage in censorship of her own staff, and her willingness to utilize and weaponize conspiracy theories on behalf of failed candidates such as Hillary Clinton. The office of the OMB handles budget and ETHICS issues.

As Deanna pointed out here, Neera Tanden ALSO engaged in covering up sexual harassment claims at CAP, and when that didn’t work, outed the VICTIM!

Given the toxicity Neera Tanden brought to her current and previous work environments, I’d say her ethics are highly questionable and pretty much non-existent. Which is why it’s very probable that her nomination is toast no matter that the Biden Administration wishes otherwise.

Feature Photo Credit: At Forum for Wages and Working People 2019 by Gage Skidmore via Flickr, cropped and modified