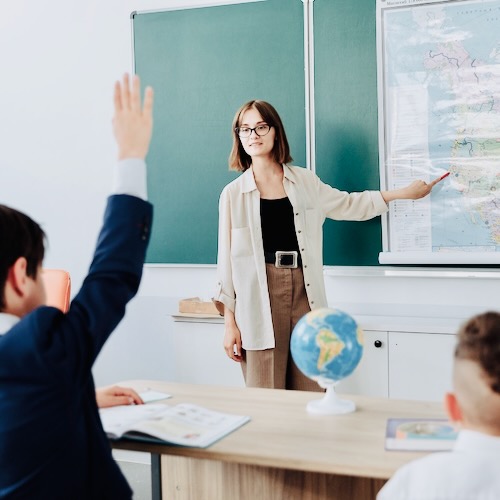 The Minneapolis teachers union has a new hiring and firing agreement. White people need to be fired first, regardless of seniority or qualifications.

A new contract between Minneapolis Public Schools and the local teachers union mandates that white teachers must be fired first when any kind of staff downsizing is initiated.

“Starting with the Spring 2023 Budget Tie-Out Cycle, if excessing a teacher who is a member of a population underrepresented among licensed teachers in the site, the District shall excess the next least senior teacher, who is not a member of an underrepresented population,” the agreement, which was originally obtained by Alpha News, says. Minority teachers “may be exempted from district-wide layoff[s] outside seniority order,” and will also be given priority during reinstatement.

In addition, teachers at 15 “racially isolated schools…with the greatest concentration of poverty” will also be protected from layoffs.

Suddenly, it’s ok to discriminate based upon race as long as the one discriminated against is…WHITE. We’ve been watching this new racial discrimination brew its ugliness more and more these last two years. This is yet another instance of where so-called social justice is running counter to reality. This is another instance where political correctness means the education of our kids will suffer because of fools such as those in the Minneapolis teachers union and the feckless school board members who nodded their heads in agreement.

Underperforming schools? Instead of firing the underperforming teachers REGARDLESS of their seniority or skin color, the union now says all those who are white must be fired first.

A few years ago the district eliminated math and reading competency testing for its teachers because black teachers failed at a much higher rate. These tests were then deemed "racist".

Now it is keeping the teachers from the lower scoring group.

*That* is the essence of Equity.

Back in March, teachers and others walked out on the students for over 14 days. They ran a strike and once again left students twisting in the wind. Per their ‘victory’ dance, they did somewhat allude to their plan for teachers of color to keep their jobs.

Well, now the details are coming to light and it’s not pretty.

Excessing teachers is the process by which staff are reduced at a particular school due to a drop in enrollment, funding or other reasons.

The agreement further goes on to say that when reinstating teachers, “the District shall prioritize the recall of a teacher who is a member of a population underrepresented among licensed teachers in the district.”

It is illegal under Title VII of the Civil Rights Act. When it comes to termination (as opposed to hiring or promotion under an affirmative-action plan), an employer can’t racially discriminate even against whites. The Third Circuit Court of Appeals ruled in 1996 that an school district can’t consider race even as a tie-breaker, in deciding who to lay off, even to promote diversity, because that (a) unduly trammels the white teacher’s rights — even affirmative action plans are supposed to be mild and not unduly trammel someone’s rights, and getting fired as opposed to being denied a promotion unduly trammels someone’s rights — and (b) putting that aside, the school district couldn’t consider race to promote diversity when black people weren’t seriously underrepresented in its workforce as a whole. That ruling was Taxman v. Board of Education of Piscataway, 91 F.3d 1547 (3d Cir. 1996).

This also goes back to a case in 1986, Wygant vs Jackson Board of Education that SCOTUS ruled on. When you look at all those rulings, it’s clear. Firing white teachers because of their skin color is a really bad idea according to the U.S. Supreme Court.

We’ve had two years of lockdowns. Two years of kids supposedly getting educated via ZOOM. The Minneapolis schools graduation rate is barely 53%. Now the rest of the country has been catching up to what we’ve been warning about all along. Our kids are behind, YEARS behind. Many teachers have failed them as have many schools and districts. So what is the solution from the Minneapolis teacher’s union? Institute a policy that ensures white teachers are discriminated against because of their skin color and nothing else.

Yes. The appalling flaw in this thinking, esp at the legislative funding level, is that there is not a *single* shred of evidence that the skin color of teachers causes, or improves, the "education gap." It's purely an affirmative action move by woke activists.

That racist discriminatory policy, which they hope will become a national model,  has nothing to do with educating our kids, and has no place in our schools. Oh to be a fly on the wall when the union and school board discover that SCOTUS has ruled many times over that white people or anyone of ANY color cannot be discriminated against because of the color of their skin.