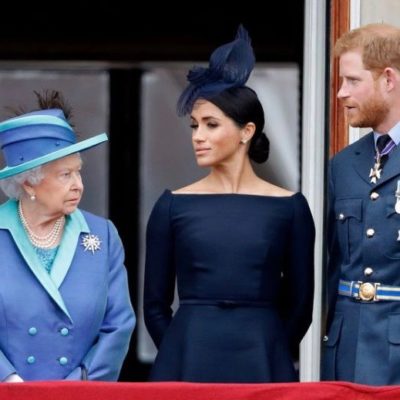 As the weekend came to a wrap, we pulled out the popcorn and tuned in to the train wreck of an interview with Oprah, Meghan Markle and Prince Harry.

For two people who wanted out of the eyes of public scrutiny, here they were, in the glory of a Montecito garden, telling national television all about their trials and run-ins with the royal family.

But they want their privacy, they whine. All while The Queen is quite cheesed by their behavior.

So the story goes like this. Once upon a time, there was a ginger-haired boy who was a bit of a rebel named Harry. Harry married (C-list at best) actress, Meghan Markle and they lived in grandma’s house for a season. Harry, The Duke of Sussex and Markle, The Duchess of Sussex, did not like grandma’s rules so they moved out of grandma’s house and fled to Canada. And then, they fled to live an even more “private life” in California where the hope was the Duchess would, hopefully pick up some voiceover work for Disney.

Seems Harry’s pitch worked. And Meghan Markle will be narrating a Disney film about elephants billed as “Meghan Markle, Duchess of Sussex”.

But “Sussex Royal“, as the couple promotes themselves, were to be “removed from the supposed ‘public interest’ justification for media intrusion into their lives” while they “became privately funded members of The Royal Family with permission to earn their own income and the ability to pursue their own private charitable interests”. Even though they were “no longer be able to formally carry out ‘official duties’ for The Queen or represent The Commonwealth”, they desired to be, “allowed to maintain their patronages including those that are classified as ‘royal’ patronages.” They also required “effective security to protect them and their son”. So, in essence, Harry and Meghan quit The Royal Family but still wanted the royal checkbook and the clout that went along with their titles of Duke and Duchess. People talked about Harry being led around through a ring in his nose by Markle when she announced her pregnancy as “gender neutral”. There were rumors of how Duchess Meghan treated royal workers badly with verbal abuse which had these workers filing complaints with Palace HR. Duchess Meghan also wore the earrings that she was told not to wear. Why? We could only venture to guess. Because she did not give a damn.

For one, Markle’s “humanitarian” efforts will forever pale in comparison to those of Princess Di. Not even in the same league. Meghan Markle is nothing but an attention-starved woman who got her claws into Prince (as we found out later) Not-So-Charming. Charles, as we recall, also was no gem.

Sure, there’s bigger scandal in the royal family if we nod our heads towards Prince Andrew and his escapades with Jeffrey Epstein. But outlets across the board are, of course, making the attacks about, you guessed it, Meghan’s race.

Teen Vogue columnist calls the practice “misogynoir”. A bunch of white men trying to tear the Duchess down. Why? Because she’s (half) black, of course.

Misogynoir, the term coined by Moya Bailey to cover the ways that racism and misogyny intersect in Black women’s lived experiences, is something that features heavily in the ways that Black women are treated on and offline. Of course, all women deal with misogyny and many people of color deal with racism, but misogynoir literally hits different. Misogynoir fuels years-long harassment campaigns of Black women online and offline. No Black woman can escape the dehumanization misogynoir allows and encourages even from other Black people. That’s what makes it an effective tool to harass Black women into silence. Literally everyone is doing it.”-Stitch, Teen Vogue

Literally, like, everyone’s doing it, according to this Teen Vogue columnist.

While some people will argue that Meghan being hated is a normal part of celebrity, Black women around the internet know that’s not quite true. Meghan isn’t hated because she’s a celebrity. Meghan has an anti-fandom (which conveniently seems to be partly made up of press and public that see themselves as her brother-in-law’s fans) because she’s a Black woman who married a prince and, for a little while, got to be a princess.”–Stitch, Teen Vogue

Sniffle. Pass the Kleenex. For a little while, Meghan Markle was a princess. Oh, please!

A few takeaways from Oprah’s prime-time chat with the “Sussex Royals”? Let’s sum it up, shall we? Meghan was naive, she didn’t “know how” to courtsey for The Queen. She is “homesteading” on a sprawling estate with chickens living the “private life” (cough) in California. Meghan and Harry had their “backyard” nuptials performed by the archbishop before the televised wedding. Meghan did not make Kate Middleton cry, Kate Middleton made her cry and while Meghan did not want to be “disparaging” towards Kate, she threw her right under that double-decker bus anyway. But Meghan Markle was borderline suicidal and like The Little Mermaid, lost her voice after marrying her prince, and white-knuckled it through public appearances, feeling “trapped” in a palace. Lots of fuzzy timelines.

Can someone map out the timeline of when she claims to have been suicidal and didn’t know where her passport was after begging for help with when she flew to New York for a bridal shower ?

And, speaking of princes, their beloved son, Archie, will never be one because of the color of his skin and he will never be protected by the Royal Family and they never got a baby picture like Kate and William. Lots of sighs and smug chuckles in the background courtesy of Meghan while Harry was telling his side of the story. Harry was also “trapped” but, but, but he didn’t know he was “trapped” and Charles, his father, stopped taking his phone calls. Hmmm.

Imagine being Queen and living through the disintegration of the Empire, the relegation of Britain to a third rate power, and seeing your grandson give you the middle finger from the colony your ancestor owned.

Oh, boy! Harry is trapped, alright! But not in the way he thinks he is. That’s okay. He’s a big boy. He’s claimed independence, right? Let’s see him come out of this one.

This is the only time I've missed Trump. https://t.co/fR4VuA7MKA

The takeaways? Meghan hates Kate, that is apparent. If one does their homework, one will see that the Duke of Sussex is in line of succession, ergo, Archie is also listed. Meghan is bitter. Harry is bitter. Meghan and Harry are a couple of whiny little rich kids crying “racism” when there isn’t any to a woman who does not want major airlines flying over her sprawling California estate and refuses to mix and mingle with the commoners on an aircraft in coach.

Oh, the misogynoir! Airing family dirty laundry for national television seldom comes without an agenda. As Meghan Markle closes in her interview with Oprah. Life is about storytelling. And boy, was this one a marmalade-dropper for the books.