Next post
The View Goes Crazy With Donald Trump Jr. 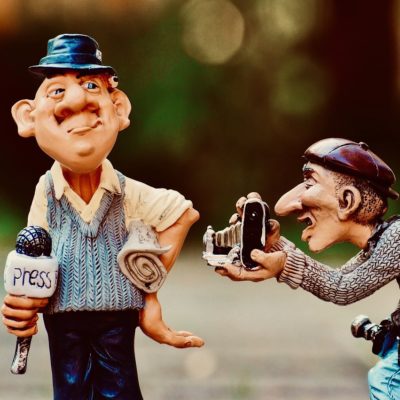 The media’s narrative is set. Protect the Trump whistleblower at all costs while working 24/7 to destroy the ABC Epstein whistleblower and bury the story once again.

ABC’s Amy Robach, WHILE mic’d up and on set, expressed frustration that her story on Epstein was booted from airing by the powers that be.

“As most are aware, Bill Clinton is frequently connected to Epstein. Considering there is a former Clinton administration figure — George Stephanopolis — sitting high up in the ABC News hierarchy it takes little curiosity to conclude why they might be apathetic in pursuing the matter further.

One other additional aspect that could explain the potential of a Clinton roadblock for their story. In the video, Robach mentioned they had this story in place three years ago. That would have placed the timing right in the heart of the election cycle. It takes little imagination to see an ABC News division faced with that kind of explosive news item affecting the Clinton name during the 2016 general election and deciding to shelve the whole story.”

It’s quite logical to assume that Hillary and her pals in the media would leap to squash such a problematic story.

With information that has now been made public regarding Epstein’s heinous evil, I’m doubly glad we do not have a Clinton in the White House.

But the brave media firefighters are, as Deanna pointed out, showing their true colors. They will cover for a pedophile, while preaching impeachment 24/7.  They will bury a story about a pimp and his pals while going after Brett Kavanaugh.

“There is just no responsible way to discuss ABC’s alleged spiking of the Epstein story — or NBC’s spiking of the Harvey Weinstein story — without dealing with how those news networks, and other media outlets, worked frantically to destroy Kavanaugh.”

But standards!! The media has standards that they happily apply to those who have been deemed WRONG.

“But Kavanaugh? He wasn’t treated deferentially. His reputation was destroyed by wild, unsupported and fantastic allegations that he was a serial sex predator.

Without corroboration, Kavanaugh was even shamed as the leader of a gang-rape crew that drugged young women before attacking them. The unctuous and now discredited lawyer Michael Avenatti was constantly on TV, welcomed on ABC, with his lips and tongue wet and malicious with gossip.”

We are seeing those slimy standards at play now. A whistleblower going after Trump? PROTECT THE PRECIOUS!! That person who dared blow the whistle on ABC sitting on the Epstein story for three years? Conspire with CBS to hunt down and destroy.

Don’t get me wrong, I’m not a fan of the Trump whistleblower as I think there is more at play politically given all we have learned about the Deep State in the last three years. That said, I ALSO believe that Marta’s post on whistleblowers is not only worth noting, it is worth keeping in mind as we continue to go down the road of impeachment for something/anything.

However, the MEDIA has its own standards. Only certain whistleblowers deserve protection.

You are witnessing an extraordinary series of events. @CBSNews fires employee ‘who had access’ to tape from RIVAL company, @ABC. Journalism execs collude to PUNISH source/Whistleblower (Irony, much?) for helping bring to light coverup of abuse. Truth to power? Media IS the power!

The ABC whistleblower, was a female staffer who had likely had enough of the media covering for a pedophile and his well-connected pals.

“An ABC rep commented: “We take violations of company policy very seriously, and we’re pursuing all avenues to determine the source of the leak.””

What an absolutely tone deaf statement!

The media policy is becoming clearer by the minute. Smear good and capable people such as Brett Kavanaugh, or dox innocent Americans because they DARE to be associated with or even LIKE Trump. But anything that might harm our betters in the media or Democrat leftist establishment? All bets are off and the knives come out.

The media establishment is hypocritical and corrupt. We are watching that play out in real time as they rush to circle the wagons and run stories about spell-checking Trump’s tweets. They are not only the enemy of journalism, they are doing great damage to this Republic while hiding behind the First Amendment when it is convenient.

And they wonder why no one trusts them anymore?