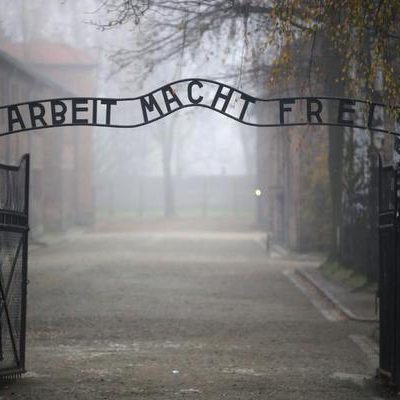 There were at least three cases of violence against police over this last weekend. The worst was the shooting of Louisiana state trooper Steven Vincent, who has now died of his terrible injuries. 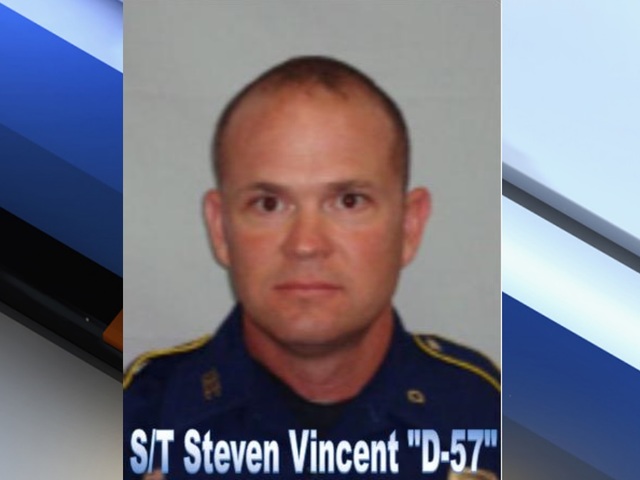 The Louisiana State Police posted an update to their Facebook page. 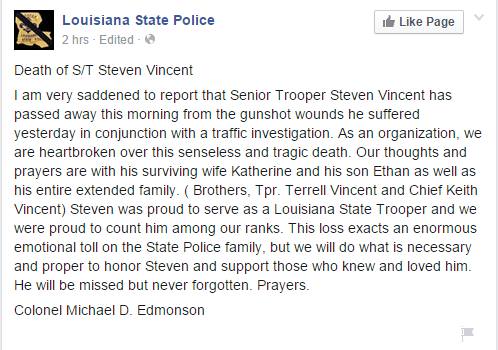 The suspect, Kevin Daigle, is in custody thanks to good Samaritans who came to Trooper Vincent’s aid.

Authorities plan to charge the accused shooter with first-degree murder after the death of Senior Trooper Steven Vincent, 43. Vincent had been trying to help a man whose pickup truck was stuck sideways in a ditch, Col. Mike Edmonson said.

“This loss exacts an enormous emotional toll on the state police family, but we will do what is necessary and proper to honor Steve and support those who knew and loved him,” Edmonson said in a statement Monday morning.

Edmonson said Kevin Daigle, 54, of Lake Charles, was under arrest at a hospital where he was taken after other motorists saw the fallen policeman and wrestled Daigle to the ground.

There were two other cases where police were injured or shot during the course of their work this weekend. In Wichita, Kansas, a suspect was shot and killed after dragging a police officer with his car.

At 10:10 p.m. Saturday, a Wichita police officer stopped a silver Toyota Prius in the 6100 block of West Kellogg Drive for a traffic infraction. The officer walked up to the car and began speaking with the driver.

According to witnesses, the officer was speaking with the driver through an open door of the car and while they were still talking, the suspect put the vehicle into drive.

The Prius apparently went quite a distance, including a couple of laps around a parking lot and heading back into traffic, before hitting another occupied car. The officer shot the driver at that point. The driver, Nicholas Garner, 26, died at the scene. The officer is seriously injured. All over a “simple” traffic stop.

And in Troy, New York, two police officers were shot and wounded while responding to an attempted carjacking.

Officer Joshua Comitale was on patrol when he spotted a suspect matching the caller’s description. The chief says Comitale began to pursue 39-year-old Thaddeus Faison on foot and called for backup.

“The bullet hit him in the back of the shoulder,” Tedesco said.

Police say Faison shot Klein and then turned the gun on Comitale. The officer was shot in both his legs.

Police say Faison was shot and eventually taken into custody.

“He continued to struggle after being shot multiple times, he had to be tased at the scene, and it took four officers to get him into restraints,” said Tedesco.

He later died from his injuries at the hospital.

Officer Comitale was operated on early Sunday morning and more procedures are expected. Officer Klein is also expected to undergo surgery. The chief says they’re both lucky to be alive.

The Troy situation was undoubtedly more dangerous going in, while the Wichita and Louisiana ones started off as traffic stops. However, police officers only want to go home at the end of the day. And when even the most routine of things, like a traffic stop, can turn out to be so deadly, is it any wonder that the police are feeling targeted?

Pray for the recovery of the injured officers, and for the widow and son of Trooper Vincent. Blue lives matter.