Previous post
"State of Terror" is Truly a Terror to Behold

Next post
Biden To America: Inflation Ain't That Bad 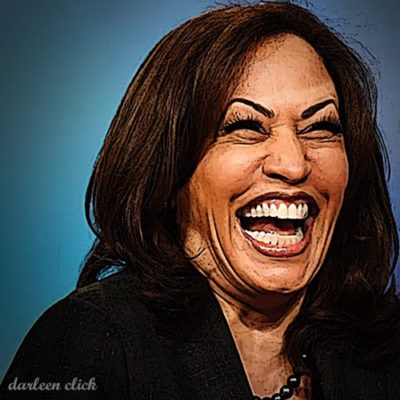 by Lisa Carr in politics 12 Comments

Who loves Paris in the fall? La Veep, Kamala Harris does. It appears Institute Pasteur got more than they bargained for when La Veep decided to throw in her French accent. Take a look.

Mon Dieu! It appears La Veep is placing great emphasis in Theeeee Plaaaannn. Capital “Teee”, Capital “Peee”. Did she brush up on this on the jet ride over the Atlantic? For added effect, she added some hand movements as well.

In government, we campaign with ‘The Plan. Uppercase T, uppercase P, ‘The Plan’! And then the environment is such we’re expected to defend ‘The Plan’ even when the first time we roll it out there may be some glitches and it’s time to re-evaluate and then do it again.”-Kamala Harris

Oui, oui, bien sur, Madame! I mean, after all, it worked for Hillary Clinton in the Deep South, didn’t it? She even went as far to say that she carries that hot sauce in her purse! I mean, she puts that $hit on everything. In fact, the more Hillary Rodham Clinton campaigned in the Deep South, the more her accent came out. Who knew?

Back to La Veep. Seriously, where’s the outrage?

I know, I know. What is the big deal, right? I mean, why would The New York Post consider this “news”? I can hear our critics now…

(Le sigh. Add in the condescending tone here.) Conservative bloggers. We have other things to worry about. La Veep’s linguistics is not one of them.

When I speak French it’s with a fake French accent too. Ya’ll just jealous you can’t speak French & probably can’t speak English very well let alone any other language. We have bigger problems than an accent in this world!

I assure you, this is not jealousy. I know enough French to be dangereuse between 7 or so years in high school and college. Not even a bit of l’envie, mon cherie.

Look, we all do it. It’s easy to liken Kamala La Veep’s faux French to any situation we are in with someone who doesn’t speak our native tongue or regional accents. I know my New Jersey/New York accent slips back when I am talking amongst my family members and friends in that area of the U.S., along with the hand motions and a few Italian cuss words. But, Madone, this is our Vice President talking down to a bunch of scientists and sounding like une bouffonne. La Partie Scientifique! These are educated people, Kamala. No need to dumb down “Theee Plaaaaan” or “Zeee Plaaaaan”.

Vive la science, say the liberals to the uneducated minions who are so bête, they are making fun of La Veep’s channeling of her inner French girl. Les Deplorables, c’est très dommage. I mean, Kamala’s pronunciation is part of a scientific process according to CNN and it is a sign that she is indeed more intelligent than the average femme or something…

Not only does speech mimicry help people literally understand each other, in that it seems to help listeners decipher the words the speakers’ mouths are forming — there’s also some evidence that imitation may be a sign of increased emotional understanding. One 1999 New York University study found that the people who imitated others the most tended to be more empathetic than those who imitated less often.”-Melissa Dahl and Science of Us, via CNN

What is even more problematic is the reason why La Veep was sent to la Paris in the first place. Remember that “clumsy” US-British submarine deal with Australia that overtook a French contract to sell subs to the Australian navy? Yeah. She’s there to apparently “smooth it over” with Marcon. That is “Zee Plan”, in uppercase, anyway.

Between her and a President that sleeps during conferences and passes gas in front of royalty we sure are a shining light for the free world.🙄

Yikes. Insert cackle here. Yes, I said insert. Okay, I’m also going to quit while I am ahead of the game.

The truth about “Thee Plaaaan” is that Lady La Cringe and her old man boss, Pepé Le Pew, who sharts his pants and sniffs young women’s hair, do not have one. Dressing it up in a fake French accent only makes this glaringly worse. They are Les Incompetents. We are Les Miserables under this administration and the rest of the world knows it. Our left-leaning friends and the media will continue to make excuses for this folly. Kamala’s cackle and now, her fake accent? C’est La Veep.